Tiger and the Snow, The

You don't necessarily need to be a foreign-film aficionado to know Roberto Benigni. Ever since he won an Oscar for his performance in La Vita e Bella a.k.a Life is Beautiful (1997), a film Benigni also directed, the charismatic Italian has been on the covers of cinema magazines all around the world. Certainly in English-speaking countries his star is now shining brightly.

Benigni's latest film La Tigre e la Neve a.k.a The Tiger and the Snow (2005) follows the deeds of a passionate poet (Attilio) who falls madly in love with a beautiful woman (Vittoria, Nicoletta Braschi) with a magnetic personality. Attilio, who also happens to be a university professor, befriends an outspoken fellow Iraqi-French poet (Fuad, Jean-Reno) and heads to Baghdad where the object of his desire has fallen sick. Operating a camel, riding would be an incorrect term here, held hostage by the Americans, and running straight through a minefield are only a few of the tests Attilio suffers in order to save his beloved Vittoria. But in the name of love...why not?! 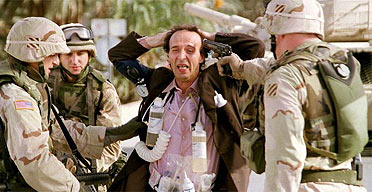 They say that love is like gambling - you play against the odds, but just can not help doing it again and again. And indeed having seen Benigni's character in action there can not be two opinions on the matter! A helpless ball of energy the Italian, as he likes to be called, is funny, tragic, and so charming, one can not but admire his heart.

Even though the Tiger and the Snow is a romantic story with more than a few genuine laughs this is also an intelligently crafted film with a serious message, one that criticizes the war in Iraq with a passion. Benigni's camera focuses on war-ravaged Baghdad capturing small details with plenty of symbolism – bored US soldiers guarding a camp full of "suspects", worshippers praying in the wake of an air attack, Red Cross volunteers waiting for permission to enter the city.

How you choose to see this film however is entirely up to you! If it rubs you the wrong way then you could dismiss Benigni's familiar tricks and plenty of facial mimicking claiming that he did it better and more convincingly in Life is Beautiful. You could claim that the plot is unbelievable!

If you are willing to buy what Benigni and Co. are selling however then you're in for some great laughs. Life does indeed provide us with some interesting dilemmas and people have long ago proven that love is capable of miracles. The Tiger and the Snow tells a story of one such miracle!

Finally, to those who slammed the Italian comedian with plenty of undeserved criticism blaming him for creating "one of the worst films of 2006" (San Francisco Chronicle) - what is it that troubles you?! Is it the message the film carries, is it the fact that it caricatures what we are spoon-fed on a daily basis by the media, or really, is there something else you are unhappy with?

The Tiger and the Snow offers a cameo performance by legendary crooner Tom Waits (Down by Law) and a beautiful soundtrack by Nicola Piovani (Avenue Montaigne). 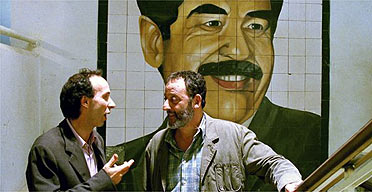 Presented in its original aspect ratio of 2.35:1 and enhanced for widescreen TVs this release suffers from two major issues. The first one is heavy overcompression which paired with a notable amount of edge-enhancement creates an ugly picture quality often distracting the viewer. During some of the desert scenes the effect is unbearable. Second it is the presence of "combing" which on a larger TV set creates plenty of problems – it is obvious that the conversion has not been done properly. Aside from that colors appear largely true and the actual print does not reveal any disturbing damage (scratches, debris). Specific areas are however plagued with a little bit of dirt which further enhances the undesired effect of the issues described above. To sum it all up the presentation is at best average leaving plenty to be desired!

Even though the Italian release of Benigni's film offers a spectacular DTS track this R1 DVD has only an Italian DD 2.0 and 5.1 mixes. This being said both are actually quite well done with the 5.1 mix providing a larger spectrum of surround activity. Dialog is easy to follow and I could not detect any disturbing audio drop-outs or hissings. Unfortunately the white English subtitles are burnt-in.

A British "Making Of" focuses on Benigni's persona highlighting specific events from the actors' life while simultaneously proving an insightful info from the Tiger and the Snow. The piece also does a good job of comparing the Benigni-director vs. the Benigni-actor. Next there is a small section of deleted scenes offering tiny bits left on the cutting floor – none of them appear of substantial quality. The real jewels here are two interview, one with Benigni and one with Braschi, where the actors provide plenty of information pertaining to the film's background, its message, and agenda. Both of the interviews are done in English and the one with Benigni is absolutely hilarious as he is just as loud and active as he is in the film.

Arriving rather late in the US The Tiger and the Snow is quite an entertaining feature. The story is simple but beautifully told finding humor where many will likely see tragedy. The R1 DVD is far from being the solid release this recent film deserves. The extras on the other hand are just as entertaining as the main feature is.