Other (International) // Unrated // May 29, 2006 // Region 0
List Price: £19.99 [Buy now and save at Cd-wow]
Review by Stuart Galbraith IV | posted May 3, 2007 | E-mail the Author
A superb character study that in some respects is unique among the works of Indian filmmaker Satyajit Ray, Abhijan ("The Expedition," 1962) is nonetheless infused with his remarkable humanism. The DVD came as a real surprise to this reviewer. Eureka!'s "Masters of Cinema" line, the British equivalent of Criterion, has in Region 2 / PAL format been offering similarly packaged art house-type classics for several years, but for some reason this disc is NTSC and All-Region. It suggests the company acquired something like worldwide rights, but the fine print notes that the title is for sale in the U.K. and Ireland only. How and why it turned up on DVD Talk's screener pile nearly a year after its official release date is unknown. 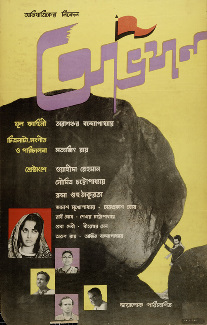 Soumitra Chatterjee stars as Narsingh, a proud but self-loathing taxi driver. His bitterness stems from two fronts. First, his wife recently left him, and this has left him so angry that he refuses to allow women into his beloved taxi, a vintage 1930 Chrysler. Narsingh's other problem is more complex: he is of the Rajput warrior caste, a descendant of a proud race of warrior cavalrymen, something like Japanese samurai, who even in 1960s India wouldn't normally mix with the lower classes, but Narsingh himself is both relatively poor and uneducated, and he's particularly ashamed of his lack of fluency in English. Familiarity with India's caste system is certainly an asset, but not required for viewing the picture.

The result of this is that those around him, particularly other taxi drivers, assume him to be conceited and he to some degree lives up to the stereotype, living a fiercely misanthropic existence and associating only with his assistant Rami (Rabi Ghosh), who functions as both a mechanic and quasi-conductor.

When Narsingh loses his taxi license in a very modern fit of reckless driving/road rage, he travels to a remote town northwest of Bengal where he receives a too-good-to-be-true offer from shady merchant and drug smuggler Sukhanram (Charuprakash Ghosh), a Sydney Greenstreet type who dangles an offer of partnership and financial support, but at what cost? (In a nicely underplayed bit of foreshadowing, Sukhanram offers Narsingh his fancy cigarette lighter, shaped like a pistol.) Meanwhile, Narsingh meets a distant relative, Joseph (Gnyanesh Mukherjee), a Christian convert who befriends him, and who introduces Narsingh to his beautiful sister, an educated English teacher named Neeli (Ruma Guha Thakurta), to whom he's instantly attracted. At about this same time he meets Gulabi (Waheeda Rehman), forced into prostitution by Sukhanram.

Abhijan is basically about Narsignh's spiritual salvation in multiethnic, multicultural India, where such tensions are still a huge problem. Though not a religious man particularly, he's eventually inspired by the actions of Joseph and Neeli whose conversion to Christianity freed them from self-imposed caste restrictions, and to whom behavior, not a predetermined fate imposed by one's caste, ultimately is the measure of a man.

This relatively simple and straightforward message is played out with great subtlety and though the film runs nearly two-and-a-half hours is consistently involving and engrossing. The film's title is apt as Ray's camera and superb score (which he also wrote) create a kind of odyssey for Narsingh as he and Rami traverse the exotically beautiful Indian landscape, speeding down roads, around farmers transporting produce to market, and past overcrowded, antiquated trains overcrowded with passengers. (Like the similarly humanistic Akira Kurosawa, Ray had a particular passion for trains, and one of Abhijan's highlights is an extremely well-edited race Narsingh's taxi has with one early in the picture.) The taxi itself becomes a surrogate horse for this downtrodden 20th century warrior (and the means to act out some of his aggression). Remembering that Narsingh's grandfather had been a famous rider, Joseph asks Narsingh if he has ever ridden a horse. Yes, Narsingh replies, 26 horses, referring to his cherished Chrysler.

The film's many characters are richly conceived and flawlessly acted, particularly by Chatterjee (The World of Apu), here quite imposing in a traditional beard and wearing makeup that emphasizes his glowering eyes.

For many years virtually only English-subtitled prints of Ray's films looked like they went through a meat grinder, but over the past few years the Satyajit Ray Film Study Center and the Academy of Motion Picture Arts & Sciences have been racing against the clock to restore and preserve Ray's films. Several original negatives have already been lost forever, and portions of Abhijan's negative were so damaged by mold that a single extant 35mm print had to be sourced for those scenes, with the most obvious lasting damage coming at the beginning of the first reel. Despite this, Abhijan for the most part looks simply wonderful. The full frame image may be inconsistent in terms of contrast and such, but the clarity throughout is remarkable, and the imperfections are nothing compared how Ray's films used to look on the art house circuit. This is a major restoration job. The progressive transfer is region-free, and the English subtitles supporting the Bengali-Hindi-English audio is optional.

Supplements include a 20-minute informal lecture on the film by the Satyajit Ray Film Study Center's Faculty Director, Dilip Basu, who puts the work into cultural and historical perspective. Also included is a Satyajit Ray FASC Documentary that originally accompanied a 50th anniversary screening of Panther Panchali at the 2005 Cannes Film Festival. The 15-minute short focuses mainly on that film, but then segues to a wonderful montage from Ray's other films, and concludes with Ray's bittersweet honorary Oscar speech, delivered from a hospital bed weeks before his death in 1992.

Better still is an expansive 35-page, full color booklet featuring essays by Joseph Linder (on the film's restoration) the late Marie Seaton, and actress Waheeda Rehman, along with many pages of Ray's original production sketches.

Those tempted by Eureka!'s "Masters of Cinema" catalog but reluctant to dip into the world of region-free DVD might want to test the waters with this NTSC, region-friendly title, a superb film whose restoration and DVD supplements make it an easy DVD Talk Collector's Series recommendation.