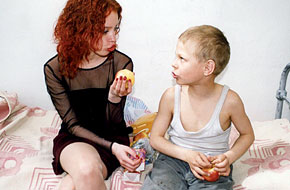 In a forgotten orphanage, somewhere in the Russian countryside, six-year-old Vanya Solntsev (Kolya Spiridonov) has been chosen by a wealthy Italian family. His papers should be ready in a matter of days - then the boy will begin a new life. But when Vanya fortuitously discovers that his mother is still alive he embarks on a treacherous journey through the heart of a country in a state of free falling!

Inspired by true events Andrei Kravchuk's Italianetz a.k.a The Italian (2005) was submitted last year by the Russian Film Academy as the country's official Oscar entry. Dark, thought-provoking, and often painful to endure Kravchuk's film takes its viewers to modern Russia - a lawless state where kids are sold for pennies.

Evoking parallels with Lukas Moodysson's Lilja 4-Ever (2002) but not as abusive The Italian very much relies on the enigmatic Kolya Spiridonov whose performance is simply impeccable. With eyes full of sorrow and a heart full of hope the malchik takes on the backroads of Russia where beggars, drunks, and prostitutes coexist in evil harmony. 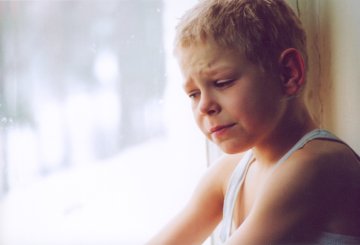 Cinematographer Aleksandr Burov does a spectacular job in recreating the gloomy look of a country stricken by extreme poverty. The dull and depressing color-scheme The Italian is built upon (a wide variety of grays and blacks are used) propels a heavy feeling of desperation, a tragedy of paramount proportions. The few moments where the audience sees Vanya smiling are quickly countered with gritty scenes bordering the unthinkable. (For example, in an act of desperation the youngster repeatedly cuts his veins with a piece of broken glass).

The message of The Italian is loud and clear - a sickening human trafficking is taking place right before the eyes of the Russian people. Kids have become the country's most profitable export!

Of course, for many whose only source of information about the current state of affairs in Russia is the government-sanitized media The Italian will likely look like a rougher version of Jan Sverak's Kolja (1996). The character Spiridonov plays isn't terribly difficult to like and at the end a morally-satisfying resolution is granted.

Reading between the lines of Kravchuk's film however reveals a much different story, one that paints a portrait of a country in a state of "controlled genocide". Those who can't survive the terrible economic conditions either drink themselves to death, sell their bodies, or sell their sons and daughters to those who pay the highest price. And then cry themselves to death!!

This is a great looking disc! Produced by Sony Pictures Classics the film is presented in its original aspect ratio of 1.66:1 and has been enhanced for widescreen TVs. Colors are exceptionally well-reproduced with grays and blacks being absolutely fantastic - they gravitate from being heavy and saturated to light and at times slightly faded. Contrast is just as good: the night scenes offer plenty of the intended by the director film-grain while the few day scenes are sharp, with lush and piercing colors. Edge-enhancement is not an issue here and the actual print is in top-notch condition. I did not see any specs, debris, or scratches.

I noticed only two instances of minor macro-blocking but these are by no means degrading to the image. Furthermore, the progressive properly-converted print is incredibly strong remaining tight to the frame. To sum it all up this is one spectacular looking disc which should leave even the most demanding of viewers satisfied. Well done Sony!

Presented with a Russian 5.1 track the film sounds incredibly well. The dialog is easy to follow and there weren't any audio imperfections that I could detect (hissing, drop-outs, etc). The rear channels get some average workout while most of the dialog comes off of the center speakers. Music and dialog are also quite well-balanced leaving absolutely nothing for the audiophile to be unhappy with. With optional yellow English, French, and Spanish subtitles.

Unfortunately there is absolutely nothing to be found on this DVD release.

The Italian brought tears to my eyes! Young Kolya Spiridonov delivers a beautiful performance in a story full of ugliness. A real eye-opener and indeed of Oscar caliber Andrei Kravchuk's film should not be missed!