Even though the premise behind Xavier Beauvois' Le Petit Lieutenant (2005) will not surprise you with shocking originality its gritty realism will! Earning Cesar for Best Actress (Nathalie Baye) in 2006 this is the director's fifth feature work since 1991.

When rookie cop Antoine (Jalil Lespert) is sent to a district of Paris known for its relatively active environment he is quickly embraced by his new colleagues. Antoine's new partner (Mallet, Antoine Chappey) immediately offers to teach him the ins and outs of the profession. Even his superior, an ex-alcoholic vet (Caroline Vaudieu, Nathalie Baye), embraces the rookie like a son.

Antoine's first job is a murdered Polish immigrant (Arthur Smykiewicz) whose background is difficult to track. A group of Russian gangsters are the possible suspects.

During a follow-up of a possible lead in a shady locale, which Mallet also uses as an excuse to have a quick beer, Antoine is stabbed. 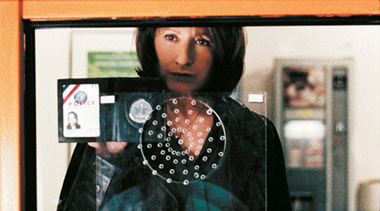 The story of Le Petit Lieutenant is divided into two halves where Antoine and consequently Caroline appear to be the focus of attention. During the first half the viewer is tricked to believe that Beauvouis' film will follow the young lieutenant's acclimatization within the police squad. The more the story progresses the more intimate the camera becomes with Antoine.

The second half of the film however is entirely dedicated to Caroline and her personal life while she simultaneously undergoes a serious investigation.

Where Le Petit Lieutenant separates itself from the rest of the conventional police-thrillers is the manner in which personal tragedy is addressed. Dialog and action are extremely believable revealing a character with a lot more on her shoulders than what she could handle. The emotional cracks that follow up are also impressive replacing the not so intriguing mystery element in this film entirely.

Furthermore, Beauvouis manages to keep the story focused without succumbing to overused clichés even though towards the finale there seems to be too much going on at the same time. The pacing of the film remains unaffected by the character split mentioned above and the switch from Antoine to Caroline is done rather well. 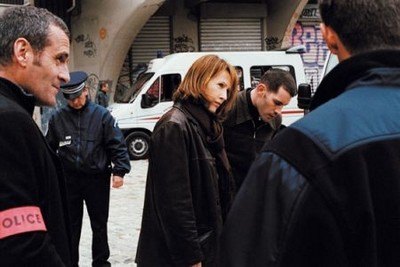 While neither of the two stories in this film stands out particularly well the atmosphere they permeate does. Beauvouis successfully builds around the two characters at the end making it difficult for the viewer to decide which one to side with. The hesitation, a purposefully created effect, is by far the film's most delicate asset which also enhances the heavy feeling from the dramatic events shown earlier.

Presented in its original aspect ratio of 1.85:1 and enhanced for widescreen TVs the film looks a tad disappointing. It seems to me that Koch Lorber Films are going back to a past many, this reviewer included, thought dealt with. I am sad to report that this is indeed a disappointing interlaced-transfer, likely a PAL-product, with plenty of combing and ghosting revealing improper conversion. Furthermore, the color-scheme is visibly affected as well as most of the time, especially during indoor scenes, the colors look washed, even bleeding. I am fairly certain the original PAL-master offers a substantially sharper and more convincing look than what we have here.

Edge-enhancement also appears to be an issue with this print and those with larger TVs will undoubtedly find its presence annoying. The print also reveals a minor dose of unnatural shimmering which further enhances the undesired effects described above. To sum it all up this truly is a major leap backwards given the company's marvelously produced La Moustache and Un Coeur an Hiver.

The film is presented with a French 5.1 track which appears substantially better than the image treatment above. I did not detect any disturbing imperfections worthy of discussion here (hissing, drop-outs). The optional English subtitles are well done capturing even some of the more problematic French expressions.

Unfortunately aside from the original theatrical trailer and a photo gallery there is nothing else to be found here.

I am going to recommend this film based on two facts: first, the film's strength and especially Nathalie Baye's performance and second the unavailability of another English-friendly version. If the second should change and either a UK or AUS disc becomes available I shall accordingly mark my review as "Rent It". This is a disappointing release for Koch Lorber Films since they have proven that quality transfers are well within their reach.