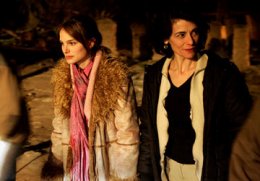 Three women - an American, an Israeli, and a Palestinian - embark on a journey amidst the dusty roads of Jordan.

Rebecca (Nathalie Portman) has decided to part ways with her fiancée and leave Jerusalem as soon as possible. She packs her personal belongings and heads towards the closest taxi station.

Hanna (Hanna Laszlo) is a taxi driver who often commutes between Israel and Jordan. She is on her way to the Free Zone to collect a sizeable amount of money when Rebecca gets into her cab.

In the Free Zone Hanna meets Leila (Hiam Abbass) a Palestinian who will offer to guide her taxi to "The Oasis"- a place where Hanna must collect her money. Upon arrival something unusual happens.

Immediately after its premiere at the Cannes Film Festival last year Free Zone (2005), Israeli director Amos Gitai's latest film, became a heated topic for discussion. The film's notorious kissing scene courtesy of charming Natalie Portman and fellow actor Aki Avni angered many Jewish officials who felt that Amos Gitai had gone a step too far in filming "lewdness" next to the Wailing Wall. As a result Free Zone gathered more attention than it should have!!

Like Gitai's previous films Free Zone plays as a realistic barometer of a culture and a region marred by never-ending bloody conflicts. This time around the director's camera roams freely amidst the Israeli-Jordanian border while documenting three women struggling to endure absurdity. Unfortunately neither the story nor the film's technical presentation is on par with what one would rightfully expect from the creator of Kadosh (1999). Free Zone is a film blemished by shaky characters and questionable pacing.

Shot as a collage of continuous memory flashbacks and fractured bits of "reality" Free Zone opens up with an approximately ten minute cry scene where Nathalie Portman showcases a tremendous emotional collapse. Then the film stops! Just as the main protagonists appear stuck in traffic most of the time so does Gitai's story - there is hardly any chemistry between the lead actors and for the most part their actions provide very little to get the audience interested. With the exception of Hanna Laslo who keeps Free Zone from being a complete disaster the rest of the cast feels as if they never managed to learn their lines (for which there is a valid "excuse" as Gitai has made it well known that the dialog was largely improvised). Finally, the little consistency Free Zone manages to achieve is unceremoniously disfigured by the actors' intimidating mumbling which English speakers will have a difficult time deciphering.

Despite of my enormous respect for Amos Gitai both as a director and an outspoken critic of what he sees as an obstacle in achieving lasting peace in the Middle-East his latest film left me cold and disappointed. There is hardly anything here that has not already been told better and in more convincing fashion. The all-star cast is impressive, their collaboration isn't!!

I was curious to see whether or not this R1 release by New Yorker would be any different than the one produced by Seville-Canada. Unfortunately it is on par with the one we have already reviewed at DVDTALK.

Presented in its original aspect ratio of 1.85:1 and enhanced for widescreen the NY print is also a direct PAL-NTSC port with plenty of very-heavy "ghosting". In fact, to my eyes this transfer looks slightly weaker than the one produced by the Canadian distrib. While print damage is not a factor here the image is often soft and at times (the Jordanian borer scene is a good example) rather unstable. Contrast is even harder to judge as I am fairly certain that the "dirty" look the film relies on is indeed intentional. Edge-enhancement is difficult to evaluate here as the look of the film is complex to say the least blurring the line between intentional effect(s) and conversion imperfection(s).

Regardless, the fact that we are dealing with yet another PAL-port further exacerbates some of the minor issues this DVD is plagued with and if you are determined to own it I would recommend that you opt for the R2 release.

Presented with an English 5.1 and DD 2.0 tracks (including sporadic bits of Hebrew and Arabic) the audio appears to be handled rather well. The manner in which this film is shot however makes it almost impossible to comprehend what the main protagonists utter. The mumbling is indeed part of the film's composition (though standing in the way of a pleasurable viewing experience) and I do not think that there is much one should be upset with when it comes to the actual audio mix herein discussed. Optional white English subtitles are provided.

The NY-produced disc offers an exclusive audio interview with Amos Gitai which was broadcast on the Leonard Lopate show on April 5, 2006. The director discusses the composition of the film, its message(s), the famous crying scene, the role of media and its subversive power(s), as well as the creative philosophy behind Free Zone. In addition, there is a theatrical trailer.

Quite some time ago I made my displeasure with this film well known stating that it was arguably the worst production to be screened at the Cannes Film Festival in 2005. I have not changed my opinion! While the cast is impressive and the director's intentions ambitious the final product is disappointing!!