Facets Video // Unrated // March 27, 2007 // Region 0
List Price: $29.95 [Buy now and save at Amazon]
Review by Stuart Galbraith IV | posted May 27, 2007 | E-mail the Author
A superb documentary fascinating on many levels, Extreme Private Eros - Love Song 1974 (Gokushiteki erosu - Renka 1974 , 1974) is director Kazuo Hara's second and last film prior to his much more famous and controversial The Emperor's Naked Army Marches On (1987). Facets Video's DVDs of both films, along with another upcoming Hara documentary scheduled for June, A Dedicated Life (1994) have unfortunately been ignored so far by mainstream review sites, but they're absolute must-see movies. 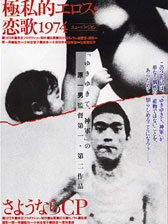 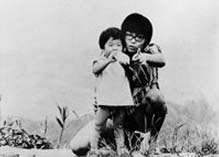 Working as a bar hostess patronized by African-American soldiers, Miyuki first embarks on a lesbian affair with a fellow hostess named Sugako. When Sugako dumps her, Miyuki becomes pregnant and later confesses her love for a black American soldier named Paul. (That romance, we're told, lasts all of three weeks.) Though the filmmaker's relationship with his subject is certainly interesting - at one point Hara turns up onscreen, weeping at Miyuki's declaration of love for Paul - the film very quickly becomes focused as a portrait of Miyuki's horribly misguided efforts to become a liberated Japanese woman.

Her ideas of radical feminism are so thoroughly wrong-headed that at times the film becomes comical. Her high-handed attitude toward native Okinawan bar hostesses borders on racism. She's a mainlander who's going to show these ignorant women what's what but fails to understand that they resent her choosing and experimenting with a lifestyle poverty precludes them from escaping. When she writes an impassioned pamphlet about her experiences, warning native Okinawan women to "take the money and run," and to not fall for "black men with big cocks," etc. she's surprised by their bemused reaction. (Miyuki likewise doesn't think in practical terms; when word gets out about the pamphlet, the gangster-owners of the clubs she visits beat up Hara and rip up the flyers, something neither seems to have anticipated.) In this sense Miyuki comes off almost exactly like Joel McCrea's misguided Hollywood director-turned-homeless tramp in Preston Sturges' Sullivan's Travels (1941).

Miyuki foolhardiness continues as she becomes obsessed with "saving" a half-Japanese/half-Black American baby belonging to a hostess acquaintance. Though she can barely support her own child, she assumes the Okinawan community will regard her as some kind of heroine for her selflessness in adopting the baby and whisking it away to a better life on the Japanese mainland, but instead they beg off helping her in her search. Later she longs for a half-black baby of her own, solely because of the color of its skin.

Ultimately, Miyuki comes off not so much as a feminist but an obsessed exhibitionist who masturbates for Hara's camera and later eagerly invites him to film her giving birth (without assistance, she boasts) in Hara's Tokyo apartment, and later she muscles in on Sugako's delivery of yet another mixed-race baby, nearly pushing aside the busy midwife to get on-camera.

Further, Miyuki is a glut of contradictions that go beyond her need to be on-camera spouting off her personal philosophies. Though it was she who dumped Hara in the first place, she admits to being jealous of Hara's new girlfriend (Sachiko Kobayashi, also the film's producer), warning her that Hara's a bad lay. She tries to position herself as some kind of anarchist fighting the system, yet after giving birth tells her new baby that Japan is the best place to live, apparently oblivious to the rude awakening awaiting her as the single-mother of a half-black child.

(Mild Spoiler) Some watching the film might assume that Hara, because of his own obsession toward her and willingness to humiliate himself, is on her side but the film's final shot, of Miyuki finally finding her true calling as a stripper, suggest Hara and Kobayashi understand Miyuki only too well.

Extreme Private Eros - Love Song 1974 is presented in its original full frame format in an excellent black and white transfer derived from the 16mm negative. The image is surprisingly sharp with little signs of wear, and the blacks are excellent throughout. Some sources suggest the film was intended for widescreen cropping, but this appears incorrect. Note: About 60% of the film uses asynchronous dialogue, possibly because the film's low budget (about $50,000) meant using cameras whose whirs tend to drown out some of the recorded dialogue. The optional English subtitles are adequate.

The only supplement is a booklet essay, "Kazuo Hara's Private War: Extreme Private Eros - Love Song 1974" by film historians Jeffrey and Kenneth Ruoff, revised an expanded from their book The Emperor's Naked Army Marches On. The essay is interesting but makes several arguably inaccurate suppositions. For example, in a scene where Miyuki calls her mother shortly after giving birth, the authors claim Miyuki's mother "suggests that she kill her baby." This is because Miyuki is heard to say, "It's too late to kill her now." However, the audience never hears the mother's end of the conversation, while Miyuki's outrageous statement is entirely in keeping with her provocateur nature.

The essay also charges that Hara's film "explores the ties between the 'family system' (kazoku seido) and the 'emperor system' (tennosei)," but there's no evidence of this in the film. Similarly, their assertion that "like Shohei Imamura's Pigs and Battleships (1961), [the film] paints a savage portrait of a Japanese port town corrupted by the American naval presence" is unsupported by what's onscreen. More akin to Imamura's History of Postwar Japan as Told by a Bar Hostess (1970), the film isn't about gaijin (foreign) customers but the hostess herself, and unlike Imamura's unpretentious, tough-as-nails heroine, Miyuki is merely a poser with baby fever, an exhibitionist masquerading as a vanguard feminist.

Extreme Private Eros - Love Song 1974 is a superb film like no other, required viewing for any serious student of documentary filmmaking and Japanese cinema, and thus a DVD Talk Collector Series title.

* She's never referred to as Hara's ex-wife in the film, but the disc's booklet essay and other sources suggest that she was.