Greek director Nikos Koundouros' award-winning Mikres Afrodites a.k.a Young Aphrodites (1963) transports its viewers to an unknown island where the locals live an idyllic life. There a young shepherd-boy is captivated by the beauty of a local girl. He decides to impress the girl by allowing her to see his prey - a dead pelican. The girl is intrigued but also uncertain about the boy's intentions. A second boy becomes interested in the girl instigating an intense rivalry.

Shot entirely in black and white Young Aphrodites recreates the pulsating sexual awakening of a boy whose simplistic world is shattered to pieces when passion is discovered. Avoiding unnecessary dialog while relying on sumptuous vistas from the unknown island pic creates a distinctive exotic feel.

Similar to Visconti's classic La Terra Trema (1948) pic also relies on the presence of local fishermen whose acting provides a sense of authenticity. Additionally, where dialog is absent cinematographer Giovanni Varriano enhances pic's exotic aura by focusing on the island's natural beauty (lines are sporadic and intentionally kept to a minimum).

Pic's pacing, however, is surprisingly consistent and in sync with the pervading sense of melancholy Koundouros favors. The introduction of a secondary plot where an older couple imitates the sexual game the young protagonists play is unexpected yet logical - the older couple's deeds are obviously symbolic.

Young Aphrodites' greatest accomplishment however is the perfect blending of music with visuals. Traditional Greek instruments are used for the creation of a powerful soundtrack which not only compliments the narrative but at times has a role of its own.

Lastly, Koundouros does not provide a logical conclusion to his story, he halts it. Still, exceptional camera work and a sense of authenticity hold pic together very well negating a few minor flaws. 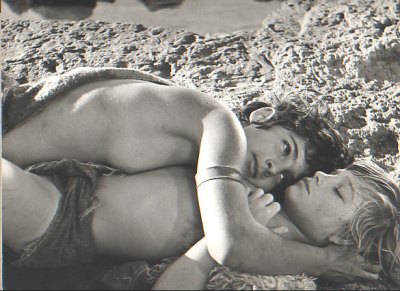 In 1963 the film won the prestigious Silver Berlin Bear as well as the FIPRESCI Prize for Best Director at the Berlin International Film Festival.

Presented in its original aspect ratio of 1.33:1 the print provided by Cinema Epoch is somewhat of a mixed bag. Contrast appears acceptable and color (black and white) reproduction decent. Yet, the print suffers from numerous minor scratches and dots which tend to exacerbate the film's dated look. Digital noise will likely be an issue for some! Meticulous restoration work has not been performed and I am fairly certain that this R1 encoded release is mastered from a secondary print. On a positive side this is a progressive print which holds quite well on large TV sets.

Presented with a Greek DD track and optional English subtitles the audio has received a fairly decent treatment. Dialog is sporadic but as already mentioned earlier music has an important role here. Audio is clear and I was not able to detect any substantial imperfections with it.

Aside from a short text message explaining the director's vision and a filmography there is nothing else to be found here.

This isn't a perfect presentation - there are some minor scratches, dots, and debris on this print. Yet, the overall presentation holds rather well for my taste. Given how incredibly difficult it is to locate this film in any form I am willing to tolerate a few of the issues described above. As to the actual picture, it is sublime!