Nothing But the Night

Other // PG // January 30, 2004 // Region 2
List Price: $45.00 [Buy now and save at Xploitedcinema]
Review by Stuart Galbraith IV | posted June 14, 2007 | E-mail the Author
While 1973's The Wicker Man is today regarded as one of the high points in '70s horror cinema, prompting an expensive 2006 remake with Nicholas Cage, another quite similar film also starring Christopher Lee, Nothing But the Night (1972) has lapsed into almost total obscurity. There doesn't seem to be an official DVD release of the film anywhere in the world except Japan, and the film isn't a favorite even among genre enthusiasts. When the Japanese DVD was first released in January 2004, this reviewer was turned off by the price (about $45 USD) and the DVD cover art, adapted from UK distributor Rank's singularly ugly original poster art. It turned up again recently half price in a local bargain bin, and was happily surprised to find the film much better than its reputation would suggest. 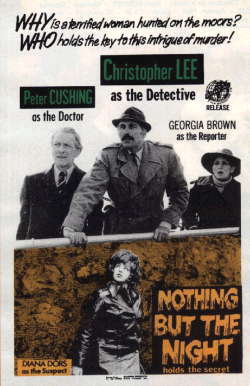 The film is structured around a baffling mystery, the apparent murders (made to look like suicides and accidents) of seemingly harmless elderly but rich trustees of the Van Traylen Trust, a luxurious orphanage located on a remote island off the coast of Scotland. Colonel Bingham (Christopher Lee) brings old friend and pathologist Sir Mark Ashley (Peter Cushing) in on his investigation after a bus carrying the orphans crashes and the driver is burned to death.

One of the children, Mary (Gwyneth Strong) is hospitalized, and through hypnosis the girl seems to be repressing memories of a traumatizing fire. Meanwhile, a convicted murderess and prostitute, Anna Harb (Diana Dors), turns up claiming to be the girl's mother and demands that her custody be restored, but Mary wants only to return to the orphanage.

As the body count of murdered trustees rises, Bingham vainly tries to secure the orphanage from whomever is behind the deeds, which they (though not really the audience) think might be the grotesque Anna Harb, who has likewise converged on the orphanage trying to get her daughter back. All of this leads to a conspiracy with both science fiction and horror elements that finally come together in the film's tense and impressively disturbing final reel.

Nothing But the Night was produced independently by Charlemagne Productions, a company formed by actor Lee and former Hammer producer Anthony Nelson-Keys. Theirs was an attempt to make a classier, more intelligent breed of thrillers, and they had hoped eventually to adapt two Dennis Wheatley novels, The Haunting of Toby Jugg and To the Devil - A Daughter (the latter eventually made with Lee at Hammer), along with Bury Him Darkly, another work by Nothing But the Night novelist John Blackburn. Unfortunately, distributor and co-financer Rank didn't adequately support Charlemagne's sincere efforts, pushing the film into production before it was ready, and then dumping it onto the market with the kind of tasteless publicity accorded ordinary horror films.

The film's relatively low budget, probably not any higher than other British horror films of the early-1970s, works against its effectiveness. Director Peter Sasdy (Taste the Blood of Dracula) and the cast are clearly giving their all, but nonetheless the film looks rushed, especially the location work which relies heavily on hand-held camerawork and the like. The script is occasionally muddled and clunky; in the novel, Anna Harb's appearance on the island generates suspense as the convicted killer appears responsible for at least some of the murders, but the film version makes it all too clear early on that she's obviously not responsible for the deeds.

Mark A. Miller, in his excellent Christopher Lee and Peter Cushing and Horror Cinema makes a convincing case that Brian Hayles' screen adaptation needlessly falls short of the rich characterizations especially in Blackburn's novel. This is especially true in Lee's case, a character that starts off sympathetically, then devolves into just another typical Lee martinet. But the film works in other respects: it's tasteful in a way that early-'70s British horror increasingly was not, most obvious in the excellent supporting cast, which includes Georgia Brown (as an assertive investigative reporter), a young Michael Gambon (very good as a local policeman), Shelagh Fraser (best-remembered as Luke Skywalker's Aunt Beru, effective here as a school mistress), and Kathleen Byron (as a mysterious doctor working at the orphanage).

The macabre aspects involving the children were common in horror fiction but in some respects virtually unprecedented in horror cinema. In the surprising climax, certainly, but also peppered throughout the film hints at a genre classic that with just a bit more luck might have been as memorable as Lee's The Wicker Man. On its own terms the film is still well above average, and a must for Cushing and Lee fans.

Distributed in Japan by the unfortunately-named Trash Mountain Video bearing both the film's original and Japanese title (Debiru naito, or "Devil Night"), Nothing But the Night is presented in a clean, crisp full frame transfer that nonetheless reformats nicely to 1.78:1 widescreen TVs (to approximate the film's 1.66:1 original theatrical aspect ratio). The Dolby Digital mono is likewise clean and clear, and the Japanese subtitles are removable.

The modest extras include a small poster and still gallery and liner notes, the latter in Japanese only, alas, with brief notes about the film and bios of Lee, Cushing, and Sasdy.

Nothing But the Night isn't quite a lost classic of horror cinema, but it is far superior to most of its contemporaries, a film worth rediscovering on DVD. Recommended.