Glamorous Life of Sachiko Hanai, The

A Japanese prostitute turns psychic after being shot in the head. She is then caught in the middle of a deadly international brawl involving two assassins -- one from North Korea, the other from the Middle East.

Part soft-core part comedy Japanese director Mitsuru Meike's The Glamorous Life of Sachiko Hanai (2003) feels like a crossbreed between William Klein's classic Mister Freedom and Ming-Liang Tsai's The Wayward Cloud. Excessive violence, dull sex, and offbeat political satire however contribute little to a largely poor narrative, one that is neither original nor entertaining. 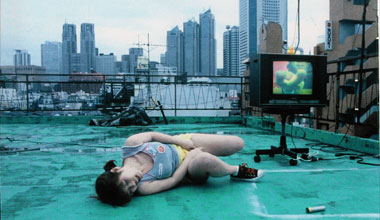 Unfocused flirtation with politics arguably represents the serious side of this arthouse wannabe. The occasional jabs at President Bush and his deeds, however, are trite and far from being hilarious. Repeated more than a few times they also tend to drag the story eventually causing more head-scratching than genuine laughs.

The plot, a mish-mash of colorful nonsense, will likely entice those who believe that eccentricity and Japanese cinema always go hand in hand. But for those who don't, the shock-effect of observing simulated sex courtesy of a girl who should have been dead to begin with will hardly be a good enough reason to endure the rest where gore, historically incorrect facts (if caricaturing and criticizing are to be pic's strong points then they are off), and awkward behavior are meant to enthrall.

Pic's technical presentation is also unimpressive - camerawork is static and devoid of elegance while the color-scheme is just flat out irritating. Fractions from the film are intentionally saturated with bright and lush colors, fluctuating in synch with thesps and their eccentric behavior, but are ineffective particularly when Sachiko is being toyed with.

Meike's faithfulness to pinku eiga isn't why pic does not deliver! Sex could be a potent subject when addressed stylishly, with a sense of direction. It could also, however, be a tremendous burden in a film where there is nothing meaningful to build upon.

The Glamorous Life of Sachiko Hanai is a poorly scripted, poorly executed, and notably devoid of substance attempt in, for a lack of better term, filmmaking.

Presented in its original aspect ratio of 1.85:1 but not enhanced for widescreen TVs the print provided by Palm Pictures is below average! In fact it would be easier to point out what is done right here than critique what isn't. From a shaky and very unconvincing color-scheme, irritating contrast fluctuations, and general unfriendly haze-effect marring this print I think it is safe to conclude that this just isn't what this film was meant to look like. Finally, the print is not progressive lacking in every major area we tend to scrutinize at TALK.

Presented with a Japanese mono track the audio treatment is not too far off what I described above: below average. Dialog appears rather clear but there is some low-level noise which makes the mono sound rather dull. Once again, this feels on par with what a VHS will offer in terms of audio quality not a DVD. Finally, the English (white) subs are burnt-in.

There are some very good extras on this disc which are more entertaining than the actual film. First, there is an insightful message explaining what a "pink film" is, what is its origin, and how it fared in Japan (some good notes on the independent spirit of the genre). Next, there is the original Japanese pink film "Horny Home Tutor: Teacher's Love Juice" (total of 65 min.) which some may rightfully find more entertaining than the remake. The title is rather revealing of the film's subject matter. Next, there is the short "The Adventures of Sachiko Hanai" which has also served as an inspiration for the full length feature...I think. The major themes and plot are quite similar with some extra Bush bashing. Finally, there are two theatrical trailers: the Japanese and the American ones.

If this Japanese production was meant for a wider audience (arthouse?) that may be willing to embrace pinku eiga, arouse its appetite for something more exotic, even avant-garde, then I must honestly state my opinion: mission unaccomplished. I was neither entertained nor fascinated, I was just bored. The DVD on the other hand is equally unimpressive, frankly, it is poor.