Grbavica: the Land of My Dreams

A mother and her daughter attempt to survive the absurd reality of postwar Bosnia. As misery sets in the two must make some difficult decisions.

Esma (Mirjana Karanovic) is desperately trying to save enough money so she could send her daughter Sara ( Luna Mijovic) on a school trip. She accepts a lousy job as a waitress in a bistro where local underground characters like to spend their cash. Shortly after Esma is approached by a bodyguard who plans on immigrating to Austria.

Sara falls for a local boy who challenges her during a game of soccer. The two spend plenty of time amidst the ruins of the city, eventually even kiss. During a bitter quarrel with her mother Sara is told that her father is not a "shaheed" (a Bosnian martyr) and she runs away.

Things become really complicated when Esma asks her new boss for an advance.

Submitted by Bosnia as its official Oscar entry in 2006 Grbavica: The Land of My Dreams is a film with plenty of antagonistic powers. An intimate story whose finale is easily predictable focuses not so much on how thesps manage to endure the impossible living conditions but the emotions raging in their souls. From the mature but noticeably brittle Esma to the rebellious but naïve Sara pic mirrors the spirit of a country with an uncertain future. 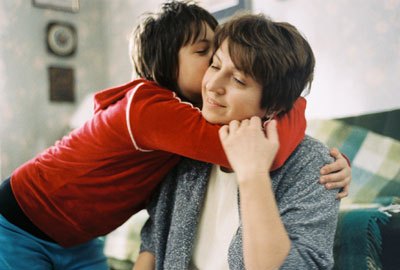 Newcomer-director Jasmila Zbanic has assembled a powerful cast capable of revealing complex emotions. Much of the drama here stays away from war and all of its post-reincarnations (even though war is to be blamed for all of the misery the main protagonists are exposed to) - a broken mother-daughter relationship in a dire need of mending and an impossible love affair are the focus of attention.

Balkan mentalities however mixed with Kusturica-esque bravado quickly transform pic into a colorful, built upon even layers of drama and comedy, mosaic of absurdity. Yet, this isn't a satire; it is as real of a tale about life as one would ever see.

Finally Grbavica will leave a lasting impression on those who see it unprepared. The sense of desperation oozing from the screen is very unsettling. It is ironic as well as this hardly looks as the land of dreams. 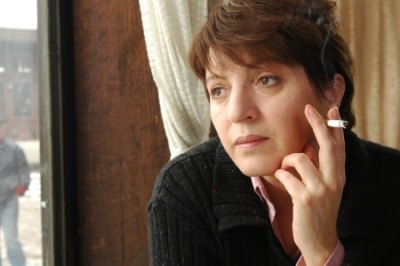 In 2006 the film was submitted as Bosnia's official Oscar entry. During the same year the film won the Golden Berlin Bear for Best director, the Peace Award, and the Prize of the Ecumenical Jury at the Berlin International Film Festival. Consequently the film also won the Best Actress Award (Mirjana Karanovic) at the Brussels European Film Festival, Belgium and was nominated for the Grand Jury Prize at the Sundance Film Festival.

Presented in an aspect ratio of 1.78:1 and enhanced for widescreen TVs this R1 print has been sourced from a PAL-master. There is notable amount of ghosting here suggesting improper conversion. The color-scheme is dull with colors often bleeding. Contrast is above average but not convincing while detail suffers from a haziness which is typically associated with faulty PAL-NTSC transfers. On a positive side the print is clear and free of damage (debris/scratches). Some of the night scenes tend to reveal minor micro-blocking but well within acceptable standards. To sum it all up while this isn't a solid print it isn't a bad one either, just an improperly converted one (you should be able to tell instantaneously).

Presented with a Serbo-Croatian 2.0 track the audio treatment is actually quite good. Dialog is easy to follow and I did not detect any issues of concern. There are no drop-outs or annoying hissing. Unfortunately, the English subtitles are burnt-in.

Aside from the original theatrical trailer and a gallery of trailers for other Strand releases there are no other supplemental materials on this disc.

A quiet film with a lovely performance by Mirjana Karanovic Grbavica is a film of substance. As to the DVD treatment by Strand Releasing it is admirable that yet again the company has brought to US shores such a gem but their current practice of favoring improper transfers is troubling.