Lights in the Dusk (Danish Release) 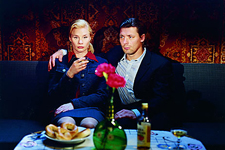 A lonely night guard is approached by a beautiful woman. The two go out on a date, shortly after the guard loses his job and the girl.

Submitted by Finland in 2006 as the country's official Oscar entry but consequently withdrawn by director Aki Kaurismaki Laitakaupungin valot a.k.a Lights in the Dusk is the final installment in the now notorious Finland Trilogy. Part comedy, part drama Lights in the Dusk picks up where Drifting Clouds and The Man Without a Past left off.

Pic's story evolves around a beat up guard by the name of Koistinen (Janne Hyytiäinen) who dreams of having a prosperous business. Singled out by colleagues and friends and looked down by his boss Koistinen is caught off guard when the beautiful Mirja (Maria Jarvenhelmi) approaches him. The two strike a conversation, have a drink, and decide on seeing each other again. After the planned date Koistinen is arrested and thrown in jail due to an alleged involvement in a local heist.

Partially influenced by Charlie Chaplin's City Lights (1931) Kaurismaki's latest offers plenty of what made the previous installments in the trilogy a success: sharp but minimalistic dialog, impeccable use of color and lighting, characters whose desperation disrupts the "logic" in their lives. Understandably, Lights in the Dusk is equally difficult to deconstruct given pic's outlandish mix of comedy, social satire, and drama.

Dark, slow-paced, and gritty pic will likely irritate those unfamiliar with the director's sense of humor. Often resembling a theater play Lights in the Dusk feeds off Koistinen's apathy, his inability to redirect his life. The result is an intriguing, especially given the lack of excessive dialog, but ultimately too static story with a not so surprising finale (pic's duration is approx. 80 min). 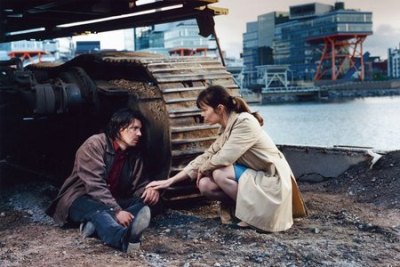 While Kaurismaki's sense of humor isn't as impressive as one might have expected it to be his emphasis on detail is. Long, continuous shots are used to capture the few recognizable emotions Koistinen's face reveals ultimately creating mixed reactions amongst the viewers (comedy and drama are indeed interconnected here).

Pic's heavy noir feel is perfectly complimented by its sluggish tempo. Koistinen's quiet deterioration is both pathetic and heartbreaking building the "loser"-image very effectively. Next to the other two entries in the trilogy however pic is far less convincing.

Presented in its original aspect ratio of 1.85:1 and enhanced for widescreen TVs this Scandinavian produced disc boast an exceptionally strong picture quality. Delicate but solid contrast scheme, virtually no edge enhancement, and an excellent color-gradation is what we have here. Detail is also well reproduced leaving very little for the viewer to be unhappy with. The actual print is in pristine condition (there is no damage of any sort to report here). Overall, this is an extremely well produced disc that should meet even the highest expectations amongst fans of Kaurismaki. Region-2, Pal encoded.

First of all allow me to point out that Sandrew Metronome do offer optional English subtitles for this release even though the back cover of this disc does no mention such. You are also given the option to select from four different interfaces: a Swedish, Danish, Norwegian, and Finnish. The disc comes with a Finnish 2.0 track which serves the film perfectly The dialog is very easy to follow and I did not detect any issues of concern. The main feature also comes with optional Finnish, Swedish, Danish, Norwegian, and English subtitles. The quality of the subs is exceptionally high without any grammatical or syntax errors.

Aside from the original theatrical trailer and a link to the film's official web sire there is nothing else to be found here.

I must admit that I am a big fan of Kaurismaki's work. Therefore my evaluation of this film is more or less biased. I happen to like the Finnish director's dark and depressing style of storytelling and Lights in Dusk delivers exactly what I expected. As mentioned in the review above if you are not familiar with Kaurismaki's work it is perhaps better to take a look at The Man Without a Past first. All things considered however, including the solid presentation by Sandrew Metronome, I must highly recommend this disc.