WR: Mysteries of the Organism

Film culture periodicals couldn't say enough about WR: Mysteries of the Organism, a free-form political collage documentary hailed as a breath of cinematic truth from the Communist hinterlands of Yugoslavia. Director Dusan Makavejev had come through with international honors for his 1967 Love Affair; or The Case of the Missing Switchboard Operator, a picture that invited comparisons with Jean-Luc Godard. WR: Mysteries of the Organism goes a step further, using its 'story' as only one element in a series of unusual documentary-like investigations into the nature of sex and radical politics -- in explicit terms. If Makavejev's subject matter seems too radical for Communist Yugoslavia, it's true: the film was banned in his home country for over a decade.

WR: Mysteries of the Organism defies easy descriptions. Docu subplots alternate with a minimal narrative about two thoroughly modern Yugoslav girls. The cute blonde Milena (Milena Dravic) loves to lecture about the place of free love in the Marxist worldview: only a completely uninhibited sex life can truly liberate the proletariat. Milena then contradicts her own avowed principles by avoiding the overtures of a rather swarthy workman. Milena's roommate Jagoda (Jagoda Kaloper) brings home a number of love-mates and skips the theorizing entirely. While Milena preaches good collective sex to her entire apartment block, Jagoda prefers to simply do it. Their opposition is seen best in the contrasting visuals of Jagoda naked and blissful atop her latest lover, while Milena strikes defiant agit-prop poses, peering at us through an 'objectifying' picture frame. 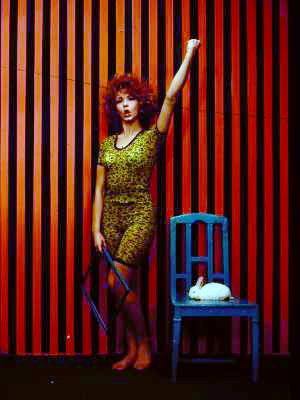 Makavejev inter-cuts Russian film clips of a movie about Josef Stalin, along with disturbing images of a patient being subjected to electroshock therapy. His editorial choices are never random. Every building block in Makavejav's filmic construction makes its point, even when the overall effect is puzzling. The film is a sex-obsessed political satire.

The film's principal topic is Wilhelm Reich, the 'WR' of the title. A refugee from Hitler's Germany, the Austrian psychiatrist and psychoanalyst came to America and developed a theory postulating the existence of a potent human force, an energy field created by the human orgasm. He called this sex energy 'Orgone' and built sitting cabinets called Orgonic Accumulators. Dismissed by the scientific community, Reich gathered a cult at his Maine research facility (called 'Orgonon'), where he made more accumulators. He also designed and built 'Cloudbusters', which he claimed focused Orgonic energy to make rain.

Reich certainly seems to have developed into a bona-fide crackpot, especially when we see one of his therapist-disciples inducing a woman into sexual arousal to create a beneficial state -- Of course she feels better. Makavejev slyly integrates Reich's pursuit of a free-sex world into Milena's speeches about the Marxist path to sexual liberation. Reich died in prison in 1957; Federal authorities used the court decision as a pretext to burn his books in 1956 and 1960. Reich's ineffective personal defense relied on the logic that in America, even a person espousing erroneous ideas should have the right to be wrong without going to prison for it.

Makavejev presents more examples of radical American creativity. The Fugs musician, author and jolly anarchist Tuli Kupferberg prances about Lincoln Center with a toy M-16 while his song "Kill for Peace" plays on the soundtrack. We spend a few moments with transvestite Jackie Curtis, as well as artist Betty Dodson, who paints pictures of people masturbating. If the fairly explicit lovemaking back in Belgrade isn't enough to limit screening opportunities for WR: Mysteries of the Organism, we also see specialized artist Nancy Godfrey 'manually assisting' Screw Magazine editor James Buckley so that she can cast his erect penis in plaster. Back at Buckley's editorial offices, people work sans clothing.

If it weren't for Makavejev's satirical aim, all of this material would have the effect of a crude sex faux-documentary. The film instead returns to Yugoslavia for an extended coda with Milena and her dream beau, a debonair Russian ice-skating star named Vladimir Ilyich. She seems to at last have found her perfect ideological mate until the authorities find her severed head next to a bloody ice skate. But never fear: when placed in a lab tray, Milena's head reawakens and continues to talk, mirroring the American Z-horror film The Brain that Wouldn't Die. A little thing like decapitation can't halt the dissemination of revolutionary truth!

Criterion's DVD of WR: Mysteries of the Organism boasts a handsome flat transfer with good color. It was filmed in both 16 and 35mm. The clear audio track alternates between English and Serbo-Croatian.

Criterion producer Issa Club assembles a coherent set of extras to complement this very unusual film. We learn a lot more about Dusan Makavejev than how to correctly pronounce name. The audio commentary is sourced from a 1999 book on the film by the late Raymond Durgnat, read by Daniel Stewart. Makavejev's 1994 short BBC film Hole in the Soul takes the director to Sunset Blvd. and other odd locations to tell the story of his career, and he turns up in additional interviews as well. Jonathan Rosenbaum insert booklet essay is a good aid to follow the film, even if a full understanding is elusive.

An unlisted extra presents clips from the film's censored version, supposedly made for the BBC. It superimposes psychedelic patterns and yellow aquarium fish (!) over 'offensive' visual details, providing the puritan shame factor to make WR into a standard 'dirty film.' No wonder Makavejev personally approved the alteration; this 'cultured' inability to confront sexual taboos fits right in with the director's theories.