Heaven and Hell (a.k.a. Shaolin Hellgate or De san lei da dou) is a delightful Run Run Shaw kung-fu epic set on an astral level of angels and demons, with mortal earthlings stuck in the middle. The large cast fights and sings while enduring multiple reincarnations on their way to peace and happiness. The emphasis is on constant fighting with knives, swords, odd weapons and bare hands. The stylized sets and abstract dance-style combat create a heightened, theatrical tone for what eventually becomes a light-hearted story about a trip to Hell.

Synopsis:
Heaven: Angel Zhou Bao (David Chiang) saves Royal Maid Zi Xiao (Maggie Lee) from a whipping, and together they flee to the Mortal World. Gatekeeper Xin Ling (Ngai-man Li) aids them, and is punished by also being sent to dwell in the real world. Earth: Reincarnated as a taxi driver, Xin Lee intercedes when lovers Shi Qui and Chen Ding (Jenny Tseng & Sheng Fu, aka Alexander Fu) try to escape the clutches of the evil Mr. Huo, a gangster. Xin Lee saves the day but is mortally wounded by a paid hit man. Hell: Xin Ling evades the corrupt demons of hell as he sees how other damned souls are punished. He befriends a sad girl named Red Dress (Chen Chi Lin), but she's sold to a procuress, while he's sentenced to 'Plow Hell.' Then the Buddha of Mercy makes his yearly visit to the City of Lost Souls. He singles out Xin Ling and tells him to recruit four other honest wrongdoers (as opposed to Evildoers). With the Buddha's blessing, the five warriors and Red Dress are then instructed to "fight their way out of Hell."

Sort of a kung-fu take on the Powell & Pressburger A Matter of Life and Death, director Cheh Chang's Heaven and Hell is a wall-to-wall fighting film held together by a clever 'film blanc' framework. Souls slip between the three levels of existence by being reincarnated, even though most seem to have no trouble remembering their previous lives. After several humorous fights in a Heaven carpeted in yellow mist, Xin Ling suddenly appears in a Hong Kong taxi, amusingly 'brought down to earth'. But the bulk of the worldly action is just as stylized, with bad guys wearing matching costumes and fighting in unison in semi-abstract interior sets. As a break from more dance-choreographed fighting, husband & wife team Alexander Fu and Jenny Tseng sing peppy pop songs about the joys and sorrows of teenagers in love. 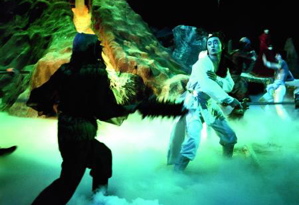 When Xin Ling enters Hell the movie becomes a parody of inferno pictures like Nobuo Nakagawa's frightening Jigoku. Some of the punishments are cartoonish, like a man being bloodlessly split in two by a giant buzz saw, but others are more wickedly funny, as when gossipy women have their tongues pulled -- stretching them two or three feet long. A graphic scene of men being flayed alive has no element of humor whatsoever.

The moral seems to be that good clean kung-fu fighters who kill righteously are not sinners, and Xin Ling soon collects four other wronged warriors. The movie stops dead at least six times for character flashbacks, a gag that becomes humorous when the Buddha of Mercy opts to 're-run' the chosen warriors' last hours as if he were calling instructions back to the projection booth. Because Hell has become corrupted by unjust demons and sub-demons, Angels from Heaven descend to clean house and set things right, using magical golden hoops. Kung-fu style, of course.

Image and Shaw Brothers' colorful delight Heaven and Hell will please Hong Kong martial arts fans that don't mind 92 minutes of virtually uninterrupted dancing mayhem staged on highly artificial sets. The direction is peppy and the heroes are determined. The 2:35 ShawScope image is in great shape, and the audio is bright and clear; be prepared for several thousand sword-clang and fist-hit sound effects. The extras are a still gallery and a selection of Shaw trailers. The only soundtrack provided is Mandarin Chinese (5.1 or Mono), with English subtitles.