A deserving but rather late tribute to the North Africans who supported the French resistance during WW2 Rachid Bouchareb's Indigines was also Algeria's official Oscar entry in 2006.

Retitled for US distribution as Days of Glory pic follows the story of a group of North African soldiers as they battle the Nazis in the closing days of WW2. Abdelkader (Sami Bouajila), Saïd Otmari (Jamel Debbouze), Yassir (Samy Naceri), Messaoud Souni (Roschdy Zem), and Sergeant Roger Martinez (Bernard Blancan) are the front line used by the French whenever there is a risky mission. Lacking proper military training but determined to serve France the soldiers soon encounter double standards. Religion, race, and politics spur bitter conflicts in the middle of a war where enemy and friends should be easily recognizable. 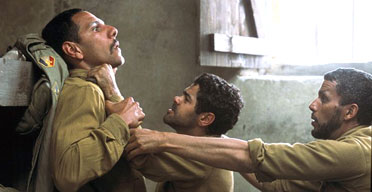 Dissecting Bouchareb's film is a difficult task. Not because its message is so complicated that it necessitates a meticulous read but rather because it is so potent and charged with political innuendo that it will eventually break more before it mends what it needs to be mended. It is quite ironic in fact that a film whose agenda is to retell a bitter past has so much in common with the present. The straightforward story of Sergeant Martinez and his men is frankly only a pretext for a much more serious analysis this film invites of the current state of the French Republic.

In America Indigenes appears to have lost much of what made it a success at the Cannes Film Festival last year. Here Bouchareb's work has been promoted as a war film whose narrative somewhat suspiciously mirrors that of Spielberg's Saving Private Ryan (1998). Even the title, which reveals much of what the film is about, has been dumbed down to the more appealing Days of Glory (the more accurate translation for Indigenes is "natives"). As a result the delicate overtones the film is saturated with are lost amidst strange comparisons culminating in the typical "it is a war film".

While Bouchareb does use war as a foundation for his story the focus of attention here is elsewhere. France's double standards imposed over its North-African soldiers resonate quite poorly with the film's loud manifestation of "liberty, equality, and fraternity". It is a shocking realization for the North-Africans to discover that the motherland they are fighting for is more of home for some than it is for others. It is even a greater shock to know that until President Jacque Chirac saw Indigenes pensions for the North Africans who fought in WW2 were unceremoniously denied by the French government.

How truthful and sincere Indigenes is however remains to be seen. I could not help but think about the results Bouchareb achieved with his film most likely on the expense of forever exonerating the crimes the North-African contingents committed during the war. Certainly, as is always the case with war propaganda, Indigenes speaks louder to those who want to hear its message than to those who aren't prepared to analyze it.

In 2006 the film won the Best Actor Award (Jamel Debbouze, Samy Naceri, Roschdy Zem, Sami Bouajila, Bernard Blancan) and the François Chalais Award for Rachid Bouchareb) at the Cannes Film Festival. In 2007 the film was nominated by Algeria as the country's official Oscar entry.

Presented in its original aspect ratio of 2.35:1 and enhanced for widescreen TVs the print provided by the Weinstein Company is in top-notch condition. Exceptional detail, excellent contrast, extremely convincing color-scheme, and very little edge-enhancement one needs to be concerned about transform this presentation in the one of the best so far I've had the opportunity to review in 2007. The progressive transfer is incredibly convincing leaving very little for anyone to be unsatisfied with. In fact, I must note that this very well could be a reference material for those wishing to see exactly how far DVD could go when mastered properly. Note: upconversion should do miracles with this print.

Presented with an Arabic-French 5.1 track and optional English and Spanish subtitles (as well as English HOH) the audio presentation is no par with the video treatment. Everything here appears extremely well mixed with dialog being very easy to follow and surround effects delicately complimenting the rest of the audio. I could not detect any disturbing hissing or pop-ups.

In addition to a standard "Making Of" which offers a familiar look at the production and preparation of the film the disc also contains a short film titled " The Colonial Friend" directed by Rachid Bouchareb which serves as a natural extension of Indigenes. The same themes are explored providing a rougher look to facts offered in the main feature.

A strong and compelling film with a one-sided look at the North-African involvement during WW2 Indigenes is far more suggestive than it may initially look. It is however manipulative to say the least in its omitting of the atrocities the liberators are known for.