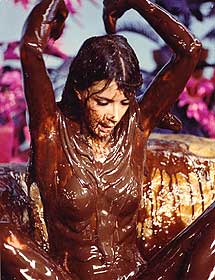 Does one dissect the plot, a never-ending bizarre exercise of shocking imagery filled with symbolism, and attempt to uncover logic? Or, does one talk about the film's complex political satire lambasting socialism, capitalism, and just about every other -ism one could think of?

The certified virgin Miss Canada (Carole Laure) is lucky enough to avoid a dangerous honeymoon with an eccentric and enormously rich lunatic with a perverted mind. She joins a surrealist group of artists who take pride in expressing themselves through defecation, vomiting, and urination. In the meantime in Paris a large vessel bearing Karl Marx as a masthead is loaded with sugar. Its captain, the radical Anna Planeta (Anna Pruchal), picks up the handsome Potemkin Sailor (Pier Clementi) off the shores of the Seine River and the two begin a most unusual affair.

As implied earlier reviewing a film such as Sweet Movie presents all sorts of issues for ambitious writers who must be careful in providing an accurate description of what the director has created. In this specific case it is nearly impossible to create an adequate picture of what Makavejev intended as visually his film is indescribable in simple words. From the ridiculous to the hilarious to the shocking all of the imagery in Sweet Movie practicaly excludes a logical read.

Perhaps the sense of confusion Sweet Movie instigates has plenty to do with precisely what Makavejev intended - a twisted, absurd new view of all things cultured, all things political, all things human. As such Sweet Movie undoubtedly succeeds.

After the initial shock one is bound to experience the bizarre world Makavejev's protagonists belong to becomes much more predictable, perhaps even easier to understand. Yet, the only certainty about Sweet Movie is that it definitely creates a reaction. Hate, shock, amusement, disgust, admiration, these are reactions that arguably capture the spectrum of emotions viewers have admitted after seeing Makavejev's film.

I also had a difficult time grasping everything, if that should be possible, Sweet Movie wants to tell its audience. Frankly, I am not even convinced that a single viewing entitles me to critique such a challenging work. In fact, pretending that I understood what I saw in its entirety would only make me sound like an elitist fool. So, instead of explaining Makevejev's work to you I leave you with a warning: this film is most definitely not for the prudish!

Presented in its original aspect ratio of 1.66:1 and enhanced for widescreen TV's the print provided by Criterion appears to be in healthy condition. Contrast is very convincing, the color-scheme appears accurate, while edge-enhancement does not appear to be an issue. A few minor specs are present but overall the print is in great condition. The film is also progressively transferred and there aren't any conversion issues that I could detect. Overall, this is a good presentation of a cult film which I doubt has ever looked this well.

Presented with a Serbo-Croatian mono track and bits of English and French the audio treatment is on par with the video presentation. The dialog is very easy to follow and I could not detect any issues you should be aware of (hissing/dropouts). The optional English subtitles are very well done without any grammatical errors.

In addition to the extras Criterion have supplied for this film the DVD arrives with a nicely done booklet containing a critical essay by Prof. David Sterritt who is a chairman of the National Society of Film Critics and an emeritus professor of theater and film at the Long Island University. The essay focuses on the controversial nature of the film as well as its history drawing interesting parallels with Makavejev's other works while at the same time partially explaining the film's controversial agenda. On the same booklet there is also a second essay titled "On Makavejev's Sweet Movie" by Stanley Cavel, professor emeritus at Harvard University. The essay partially deconstructs Makavejev's controversial film while drawing notable parallels with other difficult to analyze works (Lars Von Trier's Dancer in the Dark, Groundhog Day, Robert Altman's Nashville, etc).

The true gem here is the inclusion of a marvelous interview by Prof. Dina Iordanova, a Balkan film scholar, which offers a detailed look at the bizarre world of Makevejev. I strongly encourage you to watch this piece as it certainly deconstructs the message(s) behind Sweet Movie in a very convincing fashion. Finally, there is also a second interview with Anna Pruschal in which she recalls her collaboration with Makavejev while also reflecting on the film's complex nature.

I don't know whether or not this review will provide you with an adequate summation of Dusan Makavejev's Sweet Movie. The element of controversy here is stronger than anything I have seen previously and therefore my reading of the film is likely to be in discord with what others might think of it. As a result it is appropriate that I avoid providing you with my final words.