Argentine soldiers have landed on the islands and are preparing to defend what they consider to be an integral part of their country: the Malvinas. Men are running around, hectic orders are being followed, final preparations are being made.

Off the coast of Argentina Royal Navy ships are carrying British fighter jets that will soon enter the Malvinas air space. Backed by NATO and a neutral US government the British are poised to defend what they see as an invasion of British territory. Prime Minister Margaret Thatcher and her ministers have given green light to the use of military force.

Back on the Malvinas three friends - Vargas (Pablo Ribba), Esteban (Gaston Pauls), and Juan (Cesar Albarracin) - are longing for the days when they made love to their wives. This is not their war! They are scared, cold, and unsure what the future holds.

In a matter of hours all hell breaks loose. The Royal Navy unleashes a sea of bombs. The Argentine troops are pushed back towards the island's high hills where their commanding post is. British forces are dispatched to the ground.

Soon, the Argentine generals are told that the British have considered the use of nuclear weapons. The end as it seems is near. Capitulation is inevitable!

A tour-de-force full of gritty action Tristan Bauer's Iluminados por el Fuego a.k.a Blessed by Fire (2005) brings to life a bitter memory from the not so distant past: the Falklands War. Told through the recollections of an Argentine war-veteran who must cope with the suicide of his best friend this is a film that shows how incredibly manipulative politics can be, on both sides: the Argentine military government attempting to prolong its life amidst fears of a civil war, the conservative cabinet of Margaret Thatcher desperately attempting to survive an inevitable electoral defeat (for Thatcher's government the Falklands victory did indeed translate into electoral win). 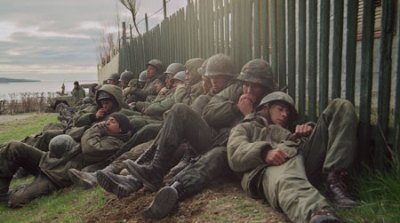 It is hard not to feel for those who became involved in this most ludicrous war (the Vargases, Estebans, and Juans shown in this film are all over Argentina). It is even harder not to feel, though this must be a different kind of feeling, for the governments that let their people exterminate each other in the name of a noble cause - the British justifying their imperialistic interests by claiming "invasion of UK soil", the Argentine abandoning diplomacy in exchange of dubious "sovereign interests".

Above all however this Argentine picture comes as a lesson! Of the best kind! Iluminados por el Fuego revives a tragic conflict which many I am convinced will be surprised to learn remains unsolved: the British continue to claim the Falkland Islands a British territory granting British citizenship to all Faulklenders, the Argentine government maintaining the Malvinas remain an integral part of our country.

Presented in its original aspect ratio of 1.85:1 and enhanced for widescreen TVs the print provided by Koch Lorber Films is quite good. It is progressive, properly converted, with the delicate color-scheme the picture boasts not manipulated. Damage is nowhere to be seen while edge enhancement is kept under control. The only area of this presentation that lacks a bit when compared to the Spanish disc (already reviewed at TALK) is contrast - there is a notable softness of the image particularly during the night scenes which isn't noticeable on the R2 disc. In addition, detail is slightly stronger and more convincing on the Spanish disc. Regardless, this is one very good looking disc which those of you locked in R1 land should certainly consider.

Unfortunately the disc produced by Koch Lorber Films does not offer the thunderous 5.1 mix found on the R2 release. What we have here is only a Spanish DD track which noticeably lacks the intensity of the 5.1 mix. In fact, in my review of the R2 disc I made it clear that a DTS track would have not improved substantially the initial presentation. Sadly, this is not the case with this R1 disc - not having the excellent 5.1 track is a major letdown. With optional yellow English subtitles.

The only supplemental materials here are a "Behind the Scenes Footage" where the cast and crew are seen in action and the original theatrical trailer. The only extra missing from the Spanish disc is the music video (Para La Vida).

Excellent film! Named Best Narrative Feature at the 2006 Tribeca Film Festival this is indeed a production that forces you to think how the more things change the more they stay the same. If region-free and looking for the best version of Blessed By Fire the Spanish disc comes highly recommended, if R1 capable-only then by all means add this disc to your collections.