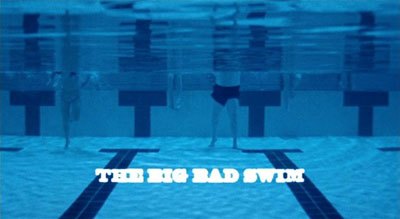 A popular feature on the 2006 Independent Film Festival circuit, The Big Bad Swim is a charming ensemble comedy that tells the story of an adult swim class at a local recreation center. While each of the individuals enrolled in the class has a different reason for being there, they all share a common desire for companionship and the need to make positive changes in their lives. Clocking in at just over 90 minutes, the film blends subtle comedy with authentic human emotion to present a wonderful slice-of-life character tale that's bound to make you smile and feel good inside.

Paget Brewster stars as Amy Pierson, a Calculus teacher on the downside of a messy divorce with another teacher at the same high school. Since her husband is tenured, it's likely that the conflict will result in her losing her job, and like many people going through a divorce, she doesn't have a lot of adult friends of her own with whom she can just hang out and be herself. With so much uncertainty and frustration in her life, she decides it's time to finally conquer one of her greatest fears and learn how to swim.

Amy soon befriends Jordan Gallagher (Jess Weixler), a beautiful younger woman who does not fear the water at all, but simply grew up in an environment where there was no access to a pool or a beach. She works as a dealer at the Mohegan Sun Casino and supplements that income in the evenings by dancing at a nearby strip club, yet she's largely just drifting through life without any real purpose or direction. These two women who are at differing stages of their lives form an unlikely friendship that is the driving force for much of the film. 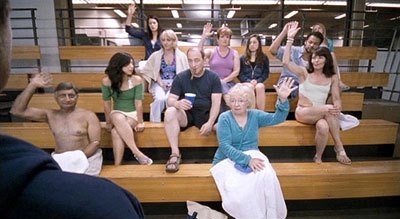 In these two roles, Brewster and Weixler are excellent. Paget Brewster never fails to deliver a great performance, and this independent film is no exception. The character of Amy is both beautiful and awkward, strong yet vulnerable, and she's completely believable as that hot teacher who seems to have her act together but is really just trying to find her way like everyone else. Weixler too crafts a subtle performance that steers clear of the depressed stripper cliché and provides a character with whom the viewer can genuinely identify.

Teaching the class is Noah Owens, played by daytime soap veteran Jeff Branson. After a fluke injury destroyed his pursuit of diving in the Olympics, he has been struggling to find meaning in his life. Outside of working at the recreation center and seeing a therapist for depression, he has almost nothing going on in his life and barely finds the desire to get out of bed in the morning. What's nice about this performance is that he's not overtly mopey and suicidal. He shows up to work on time, puts on the happiest face he can muster, and does his best to help these adults learn to conquer their fears; he's just lost emotionally and slowly trying to find his way back into the world.

As I type about these characters, I realize that it doesn't sound like a particularly funny film, but that's the beauty of The Big Bad Swim. It finds the inherent comedy within the mundane, the humor that can arise from a commonplace situation. There is nothing artificial about these characters' lives, no seemingly manufactured situation designed to create an unlikely comedic circumstance, no wacky McGuffin driving these people to some ultimate destination. It's simply a small slice of their lives, taken in context with the experiences and relationships they share at their adult swim class, and it is very effective and entertaining. This style and tone are evident in an early scene where the new adult students have to stand on the sidelines awkward and embarrassed as all the kids half their size confidently trot by to clear the pool for the nighttime class. 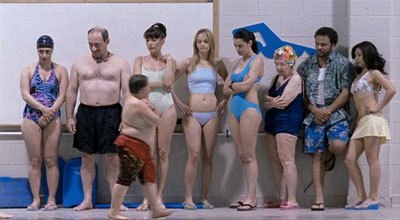 In addition to the three main characters, veteran funnyman Todd Susman provides some great material as a near-retirement husband who built a pool in his backyard and figures he should probably learn to swim now that he has it. Also hilarious are Matt Servitto, the nervous and clumsy Principal Milwaski at Amy's school, and Ricky Ullman, who plays a cocky student in Amy's class who has a crush on Jordan and uses the guise of a documentary film to get closer to the object of his affection.

The Big Bad Swim provides exactly what I want from an independent film of this nature. The characters are interesting without being over-the-top, the situations are funny without feeling artificial, and the dramatic emotion is genuine and authentic and identifiable. When the credits rolled, I found myself wanting to spend more time with these individuals and follow them to their lives beyond this limited swim class, but if we saw too much of that then the film might not be the effective and enjoyable piece of entertainment that it is.

The Big Bad Swim is presented on a single disc in a standard case. The cover art is incredibly misleading, with an airbrushed swimsuit hottie bending over in the water akin to the shameless promotion you'd see with a film like Into the Blue. It has nothing to do with the movie, and I question whether the type of person swayed by such marketing is even the target audience for this wonderful little film.

The video is presented in a 16:9 widescreen ratio with anamorphic enhancement, and it looks quite good for a low-budget production. There are a few scenes where there is a high level of grain on the print, but it's far from being a major distraction. The transfer to DVD is clean, and aside from some highly compressed previews that lead the front of the disc, there are no problems with edge enhancement or artifacting.

Audio is provided in English only with DTS and Dolby Digital 5.1 and 2.0 tracks. That does seem a bit of overkill for a dialogue-driven piece like this, but it sounds perfectly adequate, and I have no complaints. No subtitles are offered in any language, but there is Closed Captioning on the feature presentation. 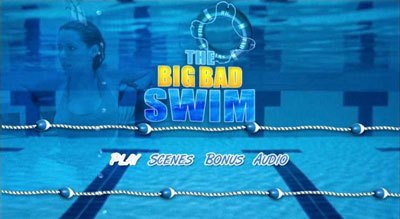 The bonus features on this disc turned out to be a real treat, and I had a fun time watching them. The first is The Making of The Big Bad Swim (25:27), a mini-documentary of sorts on numerous aspects of the production of the film. What's nice about this piece is that it doesn't have that high-budget promotional flare you often find on DVDs and felt like it was put together by people who were intimately involved with the creation of the film itself.

Cinematographer's Video Journal (13:13) is a completely unexpected delight. Josh Silfen is credited on the film as the cinematographer / director of photography, and this featurette is ostensibly a video journal that chronicles his experiences scouting locations and lighting shots so they look their absolute best in the final product. In reality, though, almost no cinematography is discussed, as Silfen is completely preoccupied with his pursuit to have a line in the film as "Guy Who Says Boo" in a scene at a bar. The whole experience is absolutely hilarious.

Extended Uncut Pool Party Scene (7:19) shows the uncut single-shot version of one of the film's more important sequences. Watching this, it's clear why it was not used this way in the final cut, but it is still interesting to see how the shot was staged. Ricky Ullman Gag Reel (3:31), as appropriately named, is a gag reel featuring only material from Ricky Ullman's comedic performance. And On the P.A. with Principal Miwalski (2:40) is a fun compilation of all the nervous announcements Matt Servitto recorded to be used during the high school scenes.

Finally there is an Audio Commentary with director Ishai Setton and writer Daniel Schechter. I always enjoy commentaries where both the writer and the director are together, because each of them can provide a different perspective to the filmmaking process, and this one makes for a good listen if you enjoyed the film.

I was surprised how much I enjoyed The Big Bad Swim. It was just some random DVD I agreed to review because I find Paget Brewster to be a talented and underappreciated actor, and I'm very happy that I made the selection. Following the experiences of a disparate group of adults learning to swim for the first time, the premise of the film offers a great source of comedy in and of itself, but the characters created through standout performances and authentic writing make for a very enjoyable piece of filmmaking. I don't know how much this small film will appeal to others, but I thoroughly enjoyed it, and if you tend to like these low-key slice-of-life types of movies, I recommend you give this one a chance.