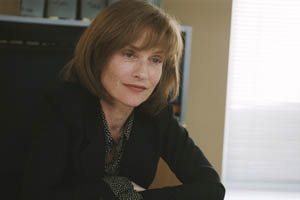 Inspired by a high-profile case known simply as the Elf Affair suspense-master Calude Chabrol's latest picture La Comédie du pouvoir a.k.a Lust for Power (2006) walks its audience into a highly-compromised corporate system infested with dubious characters. Here the focus of attention is Judge Jeanne Charmant-Killman (Isabelle Huppert) whose desire to reach to the bottom of a shady offshore deal throws her into a powerful political vortex with strong antagonistic forces.

Finding entertainment value in events other directors will likely dismiss with an ignorant aplomb Chabrol's latest picture isn't easy to embrace! The director's foray into the higher echelons of corporate business is dry, mechanical, and at times slightly confusing.

Interestingly enough even though Lust for Power is structured as a thriller where a sizeable crime has been committed (embezzlement is only a fraction of what Charmant-Killman is after) Chabrol never truly appears concerned with it. On the contrary the picture deconstructs the philosophy justifying the existence of crime amongst those who must be as transparent in their business activities as possible.

The presence of Huppert naturally provides the film with plenty of finesse and somewhat surprisingly grittiness. The manner in which Charmant-Killman methodically questions her clients isn't shocking yet her overly dismissive attitude is! CEO's, banking officials, businessmen, and colleagues are exposed to a side of the judge's character which is, to put it mildly, intimidating. Cold, precise, and very demanding Charmant-Killman gradually destroys those accustomed to having their voices heard! Not surprisingly the clash of egos is by far the film's most inquisitive asset.

Huppert's overpowering performance however, together with the sluggish pacing, might well be what keeps this film from gaining wider critical acclaim. The absence of a counter-force, a secondary character that strongly opposes Charmant-Killman, leaves the viewer notably unsatisfied. Certainly given how impressively cynical the judge is towards her marks she isn't challenged, her will isn't tested. Yet, to the amusement of those who have endured her professional eccentricity Charmant-Killman collapses when it counts the most!! 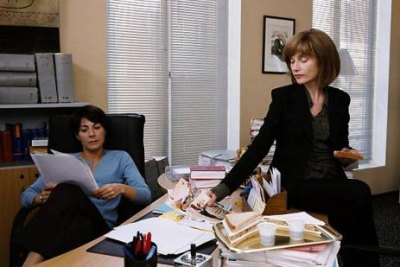 Presented in its original aspect ratio of 1.85:1 and enhanced for widescreen TVs this Canadian release by Mongrel Media appears to have been sourced from the same master the US disc by Koch Lorber Films was. Unfortunately, the Canadian release appears to be a direct PAL-NTSC port which produces plenty of "ghosting" in addition to a distractingly muted color-scheme (for the record the Koch Lorber Films disc does not suffer from the "ghosting" mentioned above). This being said the rest of the print is also in a somewhat shaky condition. Contrast, which is quite delicate to begin with, has been noticeably affected by the improper conversion and as far as I am concerned reaching the "unacceptable" mark. There aren't any marks or damage to be noted but the overall condition of this presentation is substantially less impressive when compared to the disc produced by Koch Lorber Films. With this in mind I must strongly recommend that you opt for the US version should you have interest in owning this film.

Presented with a French 5.1 track and optional English subtitles the audio presentation is good. There aren't any drop-outs of hissing(s) and dialog is very easy to follow. The English translation is very well done lacking grammatical errors.

Unfortunately, aside from the original theatrical trailer there is nothing else to be found here.

Those familiar with Chabrol's style will find his latest work well-worth a look. As expected Huppert is fabulous! With this in mind I must strongly recommend that you opt for the US version of Lust for Power by Koch Lorber Films given the unfortunate treatment this Canadian disc has been graced with (please note that the US disc is distributed under Comedy of Power).