Based on Jordi Galceran Ferrer's play The Gronholm Method Argentine director Marcelo Pineyro's The Method (2005) tells the story of a group of job applicants as they struggle to win a top position at a major firm in Madrid. Evoking parallels with James Foley's Glengarry Glen Ross (1992) the film offers an unconventional look at corporate culture and its impact on those looking to become part of it.

In a high-rise in downtown Madrid seven applicants, five men and two women, are asked to sit around a large conference table. Each one of them faces a blank computer screen attached to a moveable base. They smile, chit-chat, and discuss an advanced testing practice used by a North American corporate giant.

Dialog-driven and devoid of flashy camera work The Method delves deep into corporate culture caricaturing the must-haves one is expected to possess in order to win the job. Set entirely in a chic building with an impressive minimalistic design pic maintains a steady tempo building slowly toward a breathtaking finale with a post-apocalyptic feel.

Relying on an impressive cast of young Spanish actors (Eduardo Noriega, Eduard Fernandez, Najwa Nimri, Pablo Echarri, etc) Pineyro's camera tends to observe the main protagonists rather than "expect" their actions. The story progresses as a theater play would, gradually, allowing the viewer to entertain different possibilities as well as unlikely scenarios inviting plenty of "what ifs".

Ultimately however it is the issue of morality that drives The Method, that of those willing to win the job of their dreams no matter what the cost as well as that of a corporation whose ambition to acquire the best candidate initiates a string of extreme events. 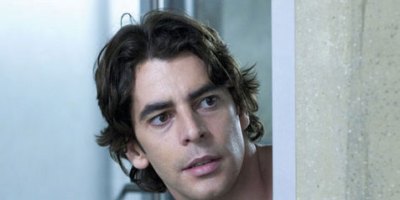 Presented in its original aspect ratio of 2.35:1 and enhanced for widescreen TVs this Palm Pictures produced disc suffers from a great deal of "ghosting" which we typically associate with improper PAL-NTSC conversions. Regrettably the color-scheme is also weak while contrast appears less than satisfying. In fact, those of you with high-end TV sets will quickly notice how unnaturally soft and blurry the image appears - a byproduct of the above-mentioned conversion issue. On a positive side the print is in pristine condition: there aren't any scratches, dirt, or disturbing marks. Still, this certainly is a disappointing release particularly given some of the top-notch transfers Palm Pictures have delivered on the US market.

Provided with a Spanish 5.1 track and optional English subtitles the audio treatment is substantially better than the video treatment. Dialog is very easy to follow and there aren't any disturbing drop-outs and/or hissings. Furthermore, the English translation is devoid of grammatical errors.

Aside from a standard "Making Of" which offers some behind-the-scenes comments by the cast and crew and a theatrical trailer there is nothing else to be found here. As these appear to be the exact same extras found on the R2 Spanish DVD I have no complaints whatsoever.

Despite of my affection for Palm Pictures and their catalog of films this time around I am forced to recommend that you seek the R2, English-friendly, disc of The Method should you desire to own this film in your libraries. I am disappointed to report that Palm Pictures have opted for something their name is rarely associated with: a cheap PAL-conversion. Regrettably, I must recommend that you only rent this exceptionally well-made Spanish production.