French director Tony Gatlif offers a healthy dose of Gypsy folklore in his latest film Transylvania (2006) which is yet to be released on DVD in the United States. A road-affair, as was the director's previous effort Exils (2004), pic once again relies on a colorful cast of European actors and the impressive eye of cinematographer Celine Bozon.

Italian beauty Zingarina (Asia Argento, Queen Margot) has come to Transylvania with her friend Marie (Amira Casarto, Anatomy of Hell) looking for her gypsy lover Milan (Italian popstar Marco Castoldi). When the two meet Zingarina tells Milan that she is expecting his child. Shortly after Milan rejects her.

On the way back to France Zingarina and Marie part ways. The Italian dresses as a gypsy and embarks on an emotional journey through the back roads of Transylvania. Along the way she meets the charismatic dealer Tchangalo (Birol Unel, Head On).

Sensual and poetic Transylvania offers an unpolished look at a country devastated by years of totalitarian dictatorship. Poorly dressed children begging for food, old women selling their family relics for pennies, cold and unfriendly roads roamed by big-hearted musicians provide an almost surreal look to this Cannes screened production. Pic's largely improvised dialog suggests that what Gatlif was attempting to capture through his camera was an atmosphere, a feel for a culture unshaken by adversity.

Unlike Exils however where ethnic music was an inseparable part of the story in Transylvania the cheery gypsies and their songs aren't as vocal. It is Zingarina's misery and consequently her friendship with Tchangalo that take precedence over everything else. As a result pic feels more intimate than Exils even though its ending is rushed, far less convincing.

The mix of spoken languages on the other hand (Romany, Italian, French, English, German, and English) is likely intentional as to underline the open nature of gypsy culture - borderless and glorifying music. The large portions of near-documentary footage throughout the film further enhance Gatlif's agenda: bringing publicity to the struggles of Romany people and their culture. 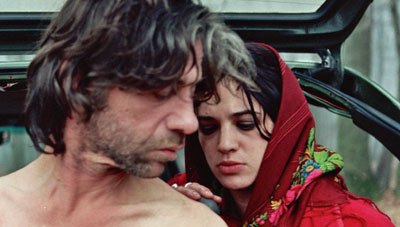 Presented in its original aspect ratio of 2.35:1 and enhanced for widescreen TVs this Canadian produced disc appears to have been sourced directly from the French TF1 Pal print. Unfortunately, this has provided the disc with mild "ghosting" which we associate with such conversions. On the positive side the actual print appears in an extremely healthy condition - there isn't any dirt/damage at all, contrast is quite manageable, and colors are indeed convincing. Sharpness is obviously affected by the improper conversion as during specific scenes some of the back scenery is a tad blurry. To sum it all up if this print had been converted properly Transylvania would have looked absolutely phenomenal.

First of all the system allows you to set up your menu either entirely in French or English. This being said, the disc offers a 5.1 mix and a 2.0 mix of the original soundtrack (a colorful mix of Romany, German, Italian, English, and French) with optional French and English subtitles. The audio is very well mixed and the gypsy music is given plenty of attention without affecting the clarity of the dialog. I also could not detect any audio drop outs or intrusive hissing(s).

The only supplemental material on this disc is the original theatrical trailer.

A fine film with exceptionally strong performances by Asia Argento and Birol Unel Transylvania has finally arrived to North America. Aside from the improper conversion which may irritate some of you the quality of the print is in fact very strong. Understanding that this is the only English-friendly release of this production in any of the five regions: Recommended.