Home Vision Entertainment // Unrated // July 10, 2007
List Price: $26.99 [Buy now and save at Amazon]
Review by Stuart Galbraith IV | posted August 24, 2007 | E-mail the Author
Though overlong at 135 minutes, Hana & Alice (Hana to Arisu, 2004) is another intriguing effort by its jack-of-all-trades filmmaker, Shunji Iwai, who not only wrote and directed the film, but also produced it and wrote its fine score. (He probably could enjoy a prolific career doing just that.) Near the forefront of a very short list of promising 40-something Japanese directors, Iwai has won a well-deserved following for such films as Love Letter (also known as When I Close My Eyes, 1995), Swallowtail Butterfly (Swallowtail, 1996), and All About Lily Chou-Chou (Riri Shushu no subete, 2001). For those unaccustomed to Iwai's work, Hana & Alice is a lot like Terry Zwigoff/Daniel Clowes Ghost World (2001), minus the suffocating smugness of that film's main characters, and with a decidedly Japanese take on its title protagonists, two 15-year-old girls. 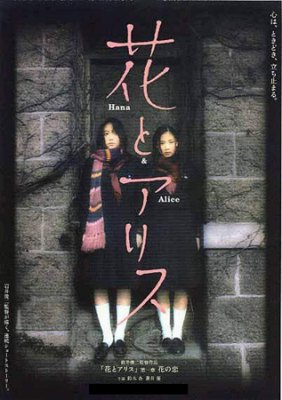 Childhood friends Hana Arai (Anne Suzuki) and Tetsuko "Alice" Arisugawa (Yu Aoi) are about to enter high school. They spend much of their free time together and even attend the same ballet class after school. Hana especially becomes obsessed with a high school senior, an introverted, pouty-faced teenager with the unfortunate name of Musashi Miyamoto (Tomohiro Kaku), the type who reads books while walking. It is while he's walking, book in hand, that Musashi hits his head on a shop's metal shutter, an injury that leaves him dazed and confused. Witnessing the accident, Hana takes advantage of Musashi's state by insisting that he's her girlfriend, that he's suffering from some kind of selective amnesia.

Musashi has his doubts, but fast-talking Hana gradually sells him on the idea and the two date as the "couple" Hana insists they've been for some time, bolstering her claims by coaxing Alice into pretending to be Musashi's bitter ex-girlfriend. The problem is that in trying to reclaim a lost memory that never was, Musashi can't reconcile his attraction to Hana while wondering why he ever "dumped" Alice, a girl he begins to like.

Hana & Alice resonated with Japanese teenagers, especially teenage girls, and the film was a big commercial success in Japan, earning about $20 million against what was probably a budget of just a few million dollars, if that. (A behind-the-scenes documentary reveals that the crew Iwai took with him on location consisted of no more than two dozen people, and maybe closer to half that.) Most contemporary Japanese films of this type are either extremely broad and improbable, often weighed down with syrupy sentiment (e.g. Swing Girls, Always - Sunset on Third Street) or pretentiously adapt the deadpan, minimalist style of western filmmakers like Jim Jarmusch and Zwigoff, whose work remains hugely influential in Japan (particularly with performers-turned-filmmakers like Naoto Takenaka and "Beat" Takeshi). Iwai leans more toward the latter, but his visual style is much less affected and intrusive than most of his contemporaries.

His characters are also richer and more authentically real than just about everything else coming out of Japan's struggling film industry. Though Musashi remains enigmatic throughout, the two girls - particularly in the way they interact with one another - plays as genuine. Throughout the film are little moments that delicately express coming of age angst and the difficulty of teenagers trying to relate to the outside world. Alice, for instance, lives with a mother (Shoko Aida) too busy trying to recapture her youth to pay much attention to her daughter; they live in the kind of singularly Japanese house common throughout the country but rarely shown in movies and TV dramas, one overwhelmed with stifling clutter. A gift of ballet slippers by Hana and Alice's teacher (Tae Kimura) to her students burdens them with the kind of kari ga aru (personal obligation) impressed upon Japanese children from an early age. In this case, for example, the implication is clear: don't quit dancing.

Probably the film's best scene involves a visit by Alice's father (Sei Hiraizumi), estranged from Alice mother and who perhaps works in China. He gives her a fountain pen, explaining that he realizes that she probably won't ever use it, and what a pain it would be to have to always refill it, but that even if she sticks it in the back of her desk drawer, every so often she'll stumble upon it and in that way it will serve as a memento of the time they shared that particular day.

Tellingly, Alice adapts this monologue into her imaginary past with Musashi, along with other elements from her relationship with her distant father. Indeed, throughout the film, Iwai ties events and relationships together, drawing parallels in subtle and obvious ways. Hana (whose name means, literally, "flower"), lives in a western-style house that resembles an egregiously overrun flower shop. Alice, like Lewis Carroll's heroine, journeys through a looking glass of sorts after being "discovered" by a modeling agency. Entering the topsy-turvy world of pop advertising, at one point Alice is seen working as a stand-in for Mika Kano, a grotesque self-parody of femininity, a kind of Japanese Anna Nicole Smith. The visually arresting appearance of Tetsuwan Atom, "Astro Boy," in the form of a giant parade-style balloon peering in through a classroom window as Hana and Musashi have it out may also be referencing Alice, whose real name is Tetsuko, albeit with a different Chinese character.

The film abounds in eccentric characterizations that, thankfully, never cross the line into broad caricature. Hana joins a rakugo (traditional Japanese comic storyteller) club to be closer to her beloved Musashi, but the two are dominated by the group's only other member, a highly-strung animated geek with professional aspirations. Iwai, formerly a music video and television commercial director, gleefully pokes fun at that world as Alice moves from audition to audition, in scenes populated by well-known Japanese stars playing themselves and various directors and photographers. He similarly pokes fun at another Japanese cinema phenomenon, the trend toward Hollywood-style high-concept blockbusters, in an audition scene for some kind of disaster film, where everyone but Alice overacts in the style this film so strenuously avoids.

Hana & Alice was shot on digital video though it doesn't look it all, with excellent cinematography throughout that's very film-like. The 16:9 enhanced image is very strong, presented at 1.77:1 to approximate its original 1.85:1 release. The Dolby Digital 2.0 Surround is also up to contemporary standards. The (yellow) English subtitles are good, though there is a lot of paraphrasing, and the credits are entirely in English, and possibly were prepared in Japan.

Supplements include a brief TV Spot and, more significantly, Filming H&A: Uncut Version, a 64-minute, cinema verite-style piece that, like the film itself, is interesting but overlong. A three-page essay by Facets Cinematheque film program director Charles Coleman speaks in generalities but touches on Iwai's main assets, also comparing the work to Jacques Rivette's Celine and Julie Go Boating (1974).

Because of the dearth of strong talent in today's generation of Japanese filmmakers, it's easy to overrate Shunji Iwai's talents: he has precious little competition, but his talent is genuine, and Hana & Alice is a strong from a fast-evolving filmmaker. High Recommended.