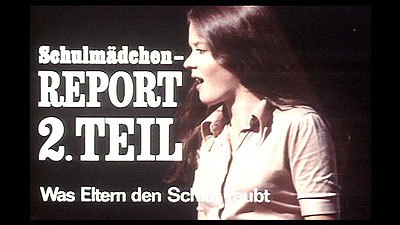 
The Story So Far...
Based on Guenther Hunold's books, the Schoolgirl Report films were mock documentaries looking at the sexual exploits of school-age girls in Germany. With a great deal of nudity and, at the time, sensation stories of debauchery and explotation, the movies were a huge hit in Germany from 1970-1980, and across the world as well. The first volume was released in April. DVDTalk has a review here.

The Movie
Back in my hedonistic college days, it was not unusual for me and my friends to seek out bad films for entertainment (and perhaps some minor titillation.) I remember one evening when myself and the world-famous Matthew J. McCue hit up the local (and now deceased) Virgin Megastore in search of something fun to watch. While Herr MJM showed some kitschy taste in selecting Ed Wood's "classic" Dance of the Dead, I went straight-up trash and bought the relatively unknown Country Hooker (starring Rene Bond.) Both were bad, both were silly, and both VHS tapes are probably lost to history at this point.

Now, the medium is DVD, but the appeal of bad movies remains the same, which is why Schoolgirl Report No. 2 has been unearthed from some obscure German film vault, ready to amuse (and perhaps titillate) another generation of midnight movie fans. Of course, those fans had better be big Hasselhoff fans or be willing to read subtitles.

After a bit of set up from old friend Frederick von Thun, the host of the first volume of SR, we can get right into our very academic exploration of morality and sexuality. As von Thun explains, the response to the previous film was so overwhelming that they were "forced" to do a sequel (and eventually 13 films in all), with stories taken from those who responded in writing to the first film. If you thought long enough, you could probably come up with every one of the scenarios the film explores, as they are the usual "girl in trouble" material you've seen again and again. 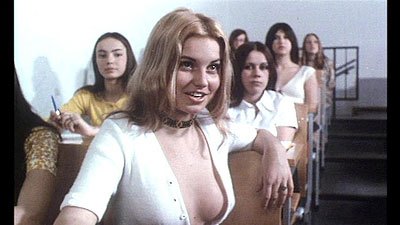 Wrapped in "official" comments from experts on youth culture, psychology and sexuality; and interviews with women on the streets of Berlin, these nine sketches are suppose to show how German schoolgirls behave in terms of their sexuality. The tone of the scenes vary wildly, from playful Benny Hill-style sketches to dramatic afterschool special material, along with a final scene that's so different than anything else in the movie that it is actually jarring. The dangerous moments are more plentiful, which makes the fun bits stand out more, including one in which a rather alien-looking fellow gets fooled in the woods.

While the unique fashions, fantastically dated music and silly over-the-top situations are amusing, it's the dialogue that will earn the most laughs, including classic lines like "Do me. Do me several times." Sure, something might be lost in translation, but I can't imagine top-notch writing became Harlequin-quality simply by moving from German to English. More likely, the filmmakers were just more focusing on getting the girls naked, whether it was because they were hippie chicks forced to screw for a place to stay, slutty 15-year-olds trying to blackmail their teacher or nude models trying to pay for a new wig. Despite the plentiful female flesh, which is very '70s, including little topiary work, there's nothing all that sexy about the movie. Part of it may be the faked sex, which looks more like a naked epileptic fit, or the fact that the situations have nothing inherently sexy about them. You have to think a good amount of the people checking out this film are/were looking for a hot time, and they will be/were disappointed. 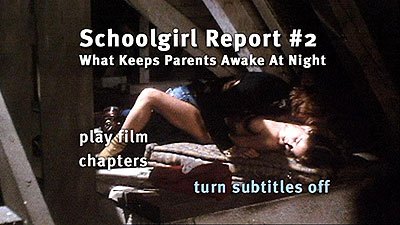 The DVD
A one-disc release packed in a standard keepcase, the DVD has a static anamorphic widescreen menu with options to play the film, select scenes and adjust the subtitles. There are no audio options, while subtitles are available in English. There is no closed captioning.

The Quality
The anamorphic widescreen transfer looks like it's from 1971, with washed out colors, excessive grain and a soft overall image. The level of detail isn't that bad, but there's a great deal of dirt and damage, including old-school cigarette burns. It looks like an explotation film, so the quality works, the way the damage in Grindhouse (well...at least in Planet Terror) worked. Some digital artifacts are noticeable if you look for them, especially during the man-on-the-street interviews.

The Dolby Digital 2.0 soundtrack is pretty clean, but it's not like it's a challenging track, with some light music, and a good deal of talky German dialogue. Nothing dynamic, nothing special. Just solid. 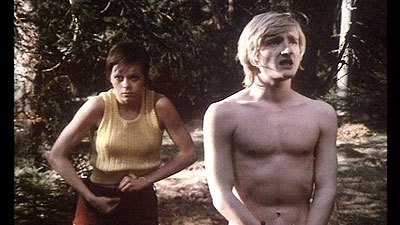 The Bottom Line
You have to be in the right mindset to enjoy a flick like Schoolgirl Report Volume 2, and even then, it's not quite clear what the point is. Is it supposed to be a sexy good time? Then why the depressing moments interspersed throughout? Is it supposed to be a parody of PSAs like Reefer Madness? Then why the blatantly humorous sketches? The whole film doesn't quite come together as a cohesive effort, but there are some interesting scenes here and there that will entertain the cult/exploitation fanbase, thanks in no small part to the "newly translated" subtitles, which often represent some of the worst dialogue ever "spoken." The presentation is simple and nothing that will add to the film, with no extras and decent quality. If you enjoy laughing at old movies, simpler times and exploitation filmmaking, this is a good one to check out, but it's unlikely to resonate enough to require purchasing.