Between the two world wars German produced some of the greatest films in the history of the medium, and nurtured several incredibly talented directors.  Hollywood just couldn't compete artistically with the German studios.  Subscribing to the old adage "If you can't beat 'em, join 'em" Hollywood imported the cream of German directors.  Fritz Lang worked for MGM starting in 1934, F.W. Murnau went to Fox in 1926, and Ernst Lubitsch was hired by Mary Pickford in 1922.  One other notable director was also brought to America at this time; Paul Leni.  He was hired by Universal in 1926, and though his movies are just as strong as the other prestigious German directors, today he is largely forgotten.  Much of this has to do with his limited output.  He only made for films in America, and tragically died of blood poisoning in 1929. 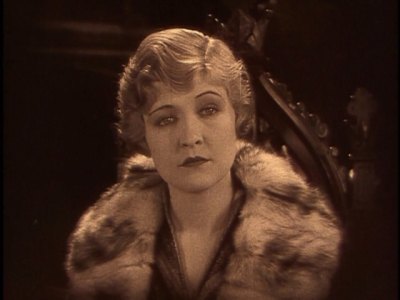 The Cat and the Canary was Leni's first American movie, and this expressionist influenced film shows Leni at his height as an artist, creating striking visuals and creating a spooky atmosphere, while also putting in some comedy that actually works quite well.  The film was released on DVD by Image in 2005.  That disc featured a restoration by David Shepard and Film Preservation Associates that looked excellent.  Now Kino has released this classic film with an image restored by England's Photoplay Productions.  This new disc looks just as good as the first with a clear, detailed image and a new orchestral soundtrack.

Twenty years after Cyrus West's death, his relatives gather late at night in his old mansion to hear the reading of his will.  Cyrus' lawyer reveals that Annabelle West (Laura La Plante) inherits the fortune, but only if she can pass a psychological examination that night to prove that she is sane.  If not, another of the jealous group is to get the estate.

Strange things start happening almost immediately.  The lawyer disappears while talking to Annabelle and a guard from the local asylum announces that he's tracked an escaped lunatic to the West house's grounds.  With a madman on the loose, can Annabelle survive the night, much less stay sane? 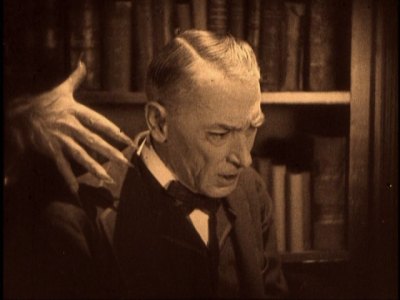 With bodies falling out of closets, secret passages, and disappearing corpses this movie contains all the elements of haunted house movies that will eventually become clichés.  They don't seem trite in this movie however; they are used to great effect.  Leni was a master at creating atmosphere, he started out as a set designer, and he works his magic with this film.  The images of curtains billowing the length of a deserted hall or the shadow of a maniac's hand passing over the face of a young girl all serve to give the film a chilling aspect.

The movie is not all eerie stalkings though; it would be hard to keep the tension up for the whole length of a feature.  To break up the suspenseful elements, Leni incorporates a fair amount of humor in the movie.  The scene where a man is hiding under a bed, only to discover that it belongs to a woman and her daughter who then proceed to bar the doors against entry, is light yet fits in well with the plot.  The humorous aspects of the film don't detract from the serious parts.  Something that is very hard to accomplish. 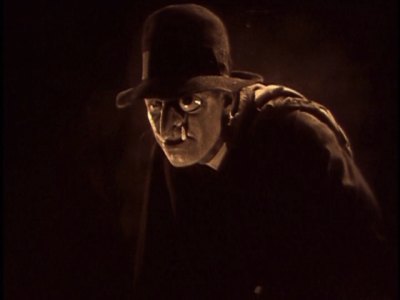 Leni's Expressionist background serves him well in this film.  There are a lot of images that have that German touch.  Near the beginning of the film, a silhouette of Cyrus West's mansion dissolves into a series of medicine bottles: illustrating what the old man's world had become.  Leni also uses a hand held camera to illustrate what the intruder who is loose in the building sees, a very modern looking set of shots.   The director also pays tribute to his German roots with an inside joke: The doctor who comes to examine Annabelle looks very much like Dr. Caligari.

This influential film which set the tone for haunted mansion stories for decades to come (not to mention at least half of all the episodes of Scooby Doo) holds up to the test of time very well.  The acting is solid without being overdone and the story, though not as surprising as it must have been in 1927, is still interesting.  A very well made film from an excellent director.

This disc comes with an orchestral score composed by Neil Brand and performed by the City of Prague Philharmonic.  I always enjoy full orchestrations and this one is very good.  The only real complaint I have is that the Theremin (an early electronic instrument) was overused in parts.  It's a small complaint however.  Being a recent recording there are no audio defects.

This is one of the relatively few silent movies that had a score composed for it, and I was disappointed to find that the original music, penned by James Bradford for the 1927 release, wasn't present. 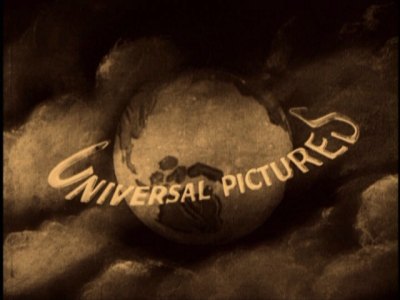 This movie has been restored by Photoplay Productions from original nitrate prints.  I have yet to be disappointed in one of their projects and this is no exception.  The movie looks great.  The sepia tones image has a wonderful amount of detail and great contrast.  The picture is sharp and the blacks are solid.  There is some print damage present, a few scratches and some dirt, but these weren't a distraction.  That's the good news.  The bad news it that this appears to be a PAL to NTSC transfer, and there is some slight ghosting in a few scenes and the film runs 4% faster because of it.  It's a shame because it mars an otherwise beautiful restoration.

The only extra included on this disc is a photo gallery of production stills and advertising for the film.  There are 16 images altogether.

Which is better; this Kino edition or the previous Image release?:

The two releases of this movie both look very good.  They represent two different restorations and they are just about equal in quality.  The Image version features a restoration by David Shepard and Film Preservation Associates and it has a bit more grain in the picture than this Kino version, and is slightly darker in places.  The Shepard restoration is tinted however, and the image is just a tad sharper than the Photoplay release.  The Image release also has more information at the top of the picture.  If it wasn't for the PAL to NTSC conversion on this Kino disc and the flaws related to that, I'd say that the two discs were of similar quality.


As far as the scores go, I have to give the advantage to the Image release.  It includes the original score as well as a modern composition by Frank Stover and performed by the Mont Alto Orchestra.  Both are very good and enjoyed the Stover score a bit more than Neil Brand's on this disc.

In the extra category the Image disc also comes out ahead.  While the few behind the scenes production shots included with the Kino disc are nice, the Image disc comes with the Harold Lloyd two-reeler, Haunted Spooks.

Though it has no bearing on which disc has the better presentation, one interesting thing to note is the back cover copy on this new Kino disc.  To be polite, I'll say that it borrows heavily from the liner notes written by Richard Peterson for Image's 2005 release.  Some excerpts:

Image (2005):  The Cat And The Canary is so clever and stylish that it would appear to be the wellspring of all "old dark house" mysteries. But when it was filmed by Universal in 1927, John Willard's play was already a theatrical warhorse, along with other popular melodramas such as The Bat, The Monster and The Gorilla.

Kino (2007):  So clever and stylish that it would appear to be the wellspring of all "old dark house" mysteries, THE CAT AND THE CANARY was in 1927 already a theatrical chestnut among similar popular melodramas.

Image:  Even so, The Cat And the Canary was a milestone of the American horror film, thanks to the ingenuity of its German director, Paul Leni. One of the first of several film artists imported from Germany by Hollywood, Leni invigorated this stage-bound genre with expressionist flair, transforming conventional material into a visual feast.

Kino:  Even so, THE CAT is a milestone of the American horror film, thanks to the ingenuity of its director, Paul Leni. One of the first film artists imported from Germany by Hollywood, Leni invigorated this stage-bound genre with expressionist flair, transforming conventional material into a visual feast.

Another rather strange thing about the cover copy is the legal warning on the back.  It reads in part:  "The program in this videocassette is licensed only for private home use."  Kino's actually been using that wording on most (all?) of their DVD releases since they started putting out video discs.  Isn't it about time to update the warning?

This film is a great example of Leni's work, a director who is all but forgotten today.  He created a creepy film that was so effective and impressive that aspects of it have been copied countless times.  While this disc does not surpass the version that Image released a couple of years ago, that doesn't make it any less impressive.  Recommended.