Boss of It All, The

Danish director Lars Von Trier introduces yet another story of human dysfunctionality, this time around with a quirky comedic vibe, slamming on corporate culture and most things modern.

The Boss of it All tells the story of a disillusioned actor (Jens Albinus) who is hired to pose as the CEO of an IT company in transition. His contractor (Peter Gantzler), a smarmy staff-pleaser with an agenda, is secretly planning to sell the company to an Icelandic tycoon with a great deal of anger for most anything Danish. But when the actor begins to take his executive position too seriously things become complicated.

American audiences can finally relax! After dedicating most of his time to caricaturing American values (Dogville) and morality (Manderlay) with The Boss of it All Lars Von Trier may have fianlly found a subject where he is as effective as I believe he could be. Sarcasm, comedy, and satire are perfectly mixed here into a great piece of cinema with a distinctive Danish flavor.

With plenty of grey and blue filling up the screen the mood of The Boss of it All quickly counters pic's otherwise energetic pacing. As if to produce confusion between those unsure about Von Trier's intent the main protagonists are also seen struggling with some unconventional dilemmas which not many comedies would pick to build upon. What this adds up to is a story with great twists and wild jabs solidifying my conviction that Von Trier is indeed one of the most innovative directors with a style impossible to mimic.

On the technical side of things The Boss of it All is just as wild. The camera is mostly static with the actual framing of the film likely to produce plenty of head-scratching. Why? Because on a number of occasions Von Trier cuts off or simply drops some of the main protagonists as they speak, move, or gesture. The effect is unusual to say the least given how the story generally lacks fluidity.

In the larger scheme of things however all the eccentricity does not bore, it actually enhances the spirit of the film. In fact, I could hardly think of any other approach that could have had a similar positive effect. And I certainly like the new snappy, reinvigorated, and to-the-point Von Trier much more than the politically-obsessed radical who directed Manderlay. 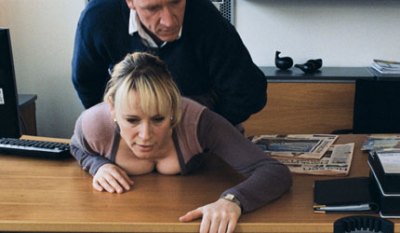 Presented in its original aspect ratio of 1.85:1 and enhanced for widescreen TVs the print provided by IFC Films looks lovely. Fine color gradation, very convincing contrast, practically no edge enhancement to be concerned about is what we have here. Furthermore, the print does a fine job with the delicate nature of film: grain and low-light night scenes are very well addressed. I could not spot dirt, damage, or any other degrading factors either. The progressive-print is especially convincing when blown through a digital projector maintaining a tight look without any momentary breakdowns.

Presented with its original Danish mono track and optional English, Spanish, and English HOH tracks the audio is on par with the video presentation. Dialog is easy to follow (it should be noted that Von Trier once again has avoided music) and I could not detect any dropouts, hissing(s), or unnatural distortion.

In addition to the theatrical trailer the DVD offers some great supplemental material. "The Actors (and the Journalist) of it All" offers a selection of comments from those involved with the production of this film and specifically Von Trier's decision to have a computer determine the scene selection (the process is described as Automavision wchih basically consists of pre-fabricated visions). Next, is the "Foreigners of it All", which just as the piece above is a mockumentary with some laughable comments from Jean-Marc Barr (asked to compare the Big Blue to Von Trier's project) and the two Icelandic "imports". In addition, there is a standard Making-Of which practically follows the cast and crew in action as well as a revealing interview with Von Trier where he talks about the unusual structure of the film as well as his overall desire to create a simple, less rabble-rousing feature. Finally, "Automavision: The New Dogma" concentrates on the technique used for the production of this film and the manner in which it compares to the championed by Von Trier Dogme movement.

Witty, well-scripted, and quite unpredictable The Boss if it All reveals a less-controversial side of Von Trier. One that I also find much more complete, more convincing! The DVD by IFC Films is of exceptionally high-quality well-deserving of our HIGHLY RECOMMENDED mark.