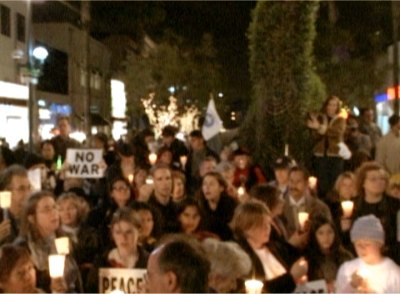 This isn't exactly a new statement, but all films---documentary or otherwise---are subjective. It's impossible to craft a series of images, words or abstract ideas without applying some degree of personal bias, though some films do a better job of hiding it than others. As evidenced by its title, of course, Robert Taicher's Rush to War (2004) makes no attempt to remain neutral. We're led around during this series of interviews almost forcefully; talking head after talking head remind us of the precarious spot we're in as a result of America's occupation of Iraq. The information is presented passionately...but in a completely one-sided manner, preventing those who need to hear it from actually listening.

To get my own personal bias out in the open (and to give the film a fair shake in the process), I agree with the bulk of what Rush to War spits out. The American public were obviously lied to when the war machine's wheels starting turning. Our country has not occupied Iraq for the sole purpose of "bringing Democracy to its people". This information hasn't changed during the last three years, of course: our soldiers are still knee-deep in conflict, while the government keeps pouring in money to fan the flames.

Such statements, of course, won't win over "the other side"---and they have even less chance of doing so when repeated ad nauseum. To the film's credit, it undoubtedly packed more punch in 2004, when the bulk of its content was still fresh and new. However, times have changed (or rather, times haven't changed): our situation hasn't gotten much better since that time, so Rush to War can't help but feel a bit late to the party. This is most certainly an attempted call to action, yet the three-year gap between then and now hurts it greatly...again, no matter what side you're on.

Oddly enough, the film features a curious mix of participants, ranging from the appropriate (former Senator George McGovern and journalist Robert Scheer) to the head-scratching (Ain't It Cool News founder Harry Knowles and director Alejandro Jodorowsky, who doubles as Taicher's mentor). To be fair, all speak candidly and passionately about their beliefs, though some of the words carry considerably less weight than others. Ultimately, it's up to the viewers to decide where we stand---but unlike more level-headed documentaries, Rush to War attempts to aggressively draw such conclusions for us.

It only took three years to arrive on disc, but Echo Bridge's DVD package doesn't support the film a great deal. Though most will find no issues with the technical presentation, the bonus material is limited and only loosely ties in to the main feature. The film's outdated feel could've easily been remedied with a more recent director's commentary, but no updates are to be found anywhere. Let's take a closer look, shall we?

Presented in what appears to be the film's original 1.33:1 aspect ratio, Rush to War looks passable for a low-budget documentary. As expected, some of the source material is a bit lacking, but the entire production is watchable and without any major digital imperfections. The audio, presented in a fairly straightforward 2.0 mix, combines clear dialogue and sound effects with more robust music cues. Optional subtitles have not been provided, but Closed Captions are included during the main feature only. 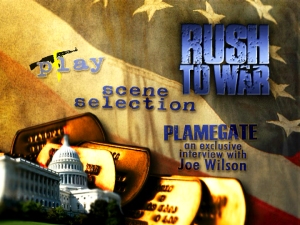 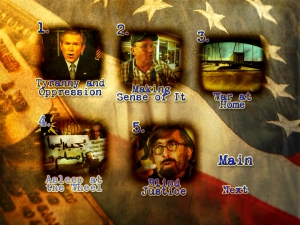 Seen above, the plain-wrap menu designs are basic and easy to navigate. The 85-minute main feature has been divided into 15 chapters, while no obvious layer change was detected during playback. This one-disc release is housed in a standard black keepcase and includes no inserts of any kind.

Bonus Features
The only supplement included here is an lengthy Interview with former Ambassador Joe Wilson (44:16), husband of outed CIA Agent Valerie Plame. Wilson speaks quite frankly about the situation that broke the secrecy of his wife's job, loosely grouping it as part of the current administration's agenda. It's as scathing and one-sided as most of the main feature; in other words, supporters of Rush to War should know what to expect. A recent audio commentary or interview with the director would've been helpful, but no such luck.
Final Thoughts

It's been three years since the release of Robert Taicher's Rush to War---and by now, the scathing documentary can't help but feel painfully dated. Most of the information presented here is common knowledge, though the film's second half provides a few relevant details and information. Still, the bulk of Rush to War is reserved for stinging verbal attacks that grow tiresome; ultimately, this film will either preach to the choir or fall on deaf ears. Echo Bridge's DVD package is a relatively barebones affair, combining a decent technical presentation with one mildly appropriate supplement. Rush to War won't be of interest to anyone sharply in tune with current events, but other interested parties may want to give it a once-over. Rent It.