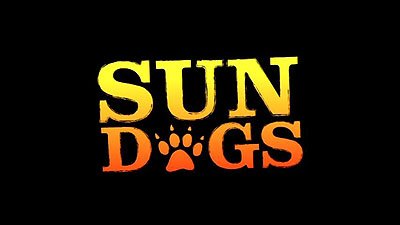 
The Movie
If you look at the box for Sun Dogs or read the description on the package, you'd probably think the movie is about a sleddog team in the very sled-unfriendly country of Jamaica. Well, yeah, the sleddogs on the cover are at the center of the film, but the movie is certainly not about dogs, sleds or anything vaguely winterish. Instead, the film performs a bit of cinematic bait-and-switch, using the cute pups to draw you in before hitting you with a look at how the Caribbean country suffers financially, despite its popularity as a vacation spot. It's like watching a Disney film only to find out you're in social studies class.

OK, maybe I'm exaggerating...a bit. There is a decent amount of time spent on the efforts to form a team from dogs rescued off the streets and the stories of the people behind the team, but in the big picture, they serve mainly as a way for the film to show the troubles that affect Jamaica and the symbolic hope and public relations goal the team stands for. Several local experts get to chime in on how Jamaica found itself in its current plight, and the film puts you on the ground to experience the area second-hand, while the same locals talk up the good things about the country. Much like the Jamaica Bobsled Team before them, the mushers and dogs are ambassadors trying to spread the word about a land known mainly for reggae music. 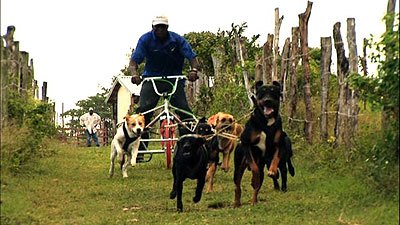 On top of the dogs and the economics lesson are scenes from an animated Sun Dogs story that either the sleddog team wants to make or has made, and which somewhat mirrors the storyline of the real team. I would have liked to have seen more of this, as the animation isn't bad and the characters, a gang of anthropomorphic Jamaican sleddogs, are cute and pretty funny. Unfortunately, when you mix this light-hearted content with the semi-dramatic tale of the team and the serious plight of the country, it gets a bit uneven in terms of the storytelling, though I guess in the end, it gives the film some balance as well.

For a documentary, the film is very stylish and quite well edited, maintaining a good energy throughout, even when tackling decidedly unsexy topics like potholes and education. The film is particularly effective when it comes to telling the smaller stories inside the overall documentary. A crisis within the team, the history of sledding, singer Jimmy Buffet's involvement with the team...they are all neatly compartmentalized chapters effectively folded into one movie. It's just that this movie isn't the one the box seems to offer, one most viewers would want to see. 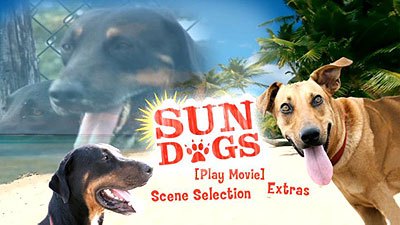 The DVD
A single-disc release, the DVD is packed in a single-width clear keepcase with a double-sided cover that has chapter-stops listed on the inside. The DVD features an anamorphic widescreen animated main menu with options to watch the film, select scenes and check out the extras. There are no audio options, no subtitles and no closed captioning.

The Quality
The anamorphic widescreen transfer on Sun Dogs is quite solid, with the film having been shot on HD video. The colors are extremely vivid, and the level of detail is rather high, while the image is very sharp. Though there's some aliasing at times along sharp edges, there are no noticeable digital artifacts, and the animated segments are crystal clear. Overall, it's a very nice looking disc.

The sound is available in a Dolby Digital 2.0 track that does what it needs to do, presenting a strong musical presence and clear dialogue that helps make some of the thicker accents easier to understand. There's nothing dynamic about the mix, but you rarely expect a complex audio delivery from a documentary.

The Extras
The bulk of the bonus material arrives in the form of four short featurettes. First up is a closer look at Buffett's involvement with the dogsled team, which runs about four minutes. Mainly, it focuses on how he was asked to support them, with footage of him visiting the team's kennel. The 6:42 "How to Teach Your Dog to Pull in Harness" is just that, as it explains how to train your own dog. My schnoodle will probably not be signing up for this class.

The third featurette is about two and a half-minutes long and has more info about the Jamaican dogsled team, updating on their more recent exploits. It's followed by "The JSPCA at Work" which spends about six minutes on the animal rescue group's mission and efforts. Each of the featurettes points you to a web site to learn more, giving them the feel of an "very special" TV episode from the '80s. The featurettes are joined by short text bios of the dogs on the team, which are certainly cute.

The disc wraps with previews of other Palm Pictures releases. 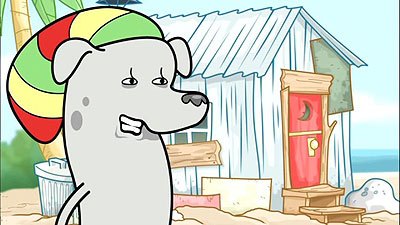 The Bottom Line
I have plenty of praise for this movie, but trying to pass off a fine documentary about the economic and cultural challenges facing Jamaica as a fun family film, the way the packaging seems to do here, was not the best move, as it's likely to frustrate, rather than educate. It's too bad that many might feel that way, since the film is well-made and entertaining, and gives some insight into areas that aren't too well-known. The DVD looks and sounds very nice, though the extras could have impressed more, instead of coming off as a collection of PSAs. If you know what you're getting, this is a nice, relatively light documentary, but if you're expecting a fun time ala Cool Runnings, go back and rent that one instead.