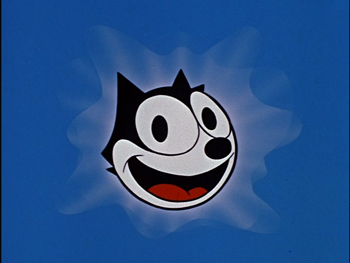 After my unlucky experience revisiting Woody Woodpecker on DVD, I was a little worried about tackling Felix the Cat: The Complete 1958-1959 Series. Also billed as the "Golden Anniversary Edition," the two-DVD set houses the 31 episodes from the early television series. A child of syndication, I recall seeing these on a local children's program, interspersed with other cartoons (perhaps even Woody) as some sort of block of miscellaneous shorts. A fan of tricksters, I enjoyed Felix's antics because he had an actual Bag of Tricks, from which anything could be extracted. With its catchy theme song ("Felix the cat, the wonderful wonderful cat..."), the show inspired a kind of Pavlovian response when these 'toons popped up in the mix. I recalled that they often connected, making me all the more eager to see what was coming next.

Hitting "play all" on DVD 1, I was instantly surprised. I was in a time capsule, sitting on the floor in front of my family's giant, wood-framed television, eating cereal and dreading my mother coming in and telling me it was time to go to school. Do I really have to write this review? Can't I just watch cartoons all day?

By the time Felix had hit television for original programming, he had already had a long run in comic strips and in theatres. The 31 segments here are a bit more happy-go-lucky than the old-school Felix, geared more towards children. The cartoons are all around seven minutes in length, resembling the classic theatrical shorts of the big animation studios. I am not sure how this was structured for the original airing. I noticed that many of the segments had a fade a couple of minutes in that looked like a commercial break. The shorts are somewhat serial in nature, though not dogmatically so. For instance, in the first cartoon, "The Magic Bag," Felix runs afoul of the mustachioed Professor for the very first time, creating the dynamic for the rest of the shows where the scientist tries to steal Felix's bag. At the end of the short, Felix has won and the Professor uses a homemade spanking machine, the first of his many deranged self-flagellation contraptions, to punish himself. Cartoon 2, "Into Outer Space," opens with Felix sitting in the middle of the same lab, with the Professor spying on him and concocting a new plan to launch the cat into orbit, dispensing with any need for real plot development. This cartoon ends with Felix having landed in Alaska, where we find him yet again in #3, "Abominable Snowman." And so on.

This classic serial feeling is enhanced by the fantastic musical score. Played almost entirely on a pipe organ in the early episodes, it sounds a lot like what we'd expect accompanying a western or space-age cliffhanger series. (Eventually, a more standard orchestral score would become the norm.) In essence, stringing these cartoons together has the effect of making them like one long skirmish between Felix and the Professor, even if they don't always end and begin in the same exact spots. Adding to the quality of how these cartoons sounded, the voices for the show at this time were done by Jack Mercer, most famous for his long-standing gig as Popeye.

Truth be told, the stories are incredibly simplistic, and outside of some smart puns that might go over the heads of kids (Eugene O'Neill references weren't big at my elementary school), the gags aren't terribly sophisticated. The appeal is really in how genial and easygoing the cartoons are. They make me happy, like a quick dose of lithium from a sunset. I'd say 75% of that happiness, though, is the look of the cartoons. The shows were produced by Trans-Lux and oversaw by Joe Oriolo, the man who had taken over the comics from Felix's creator Otto Messmer. While they could have been hamstrung by the limited budget and technique of early television, the animators used the imposed shortcuts to their advantage. Employing bright colors and bold shapes, they turned the simple nature of the backgrounds into a style choice, finding a space between the children's book style of Mary Blair and the more surreal pop art of Maurice Noble (even if, frankly, not up to their caliber). Though there are often huge blank spaces behind the characters, what objects do appear are evocative and worthy of their own showcase. Likewise, contrivances like the Professor's mouth-covering moustache give the Felix the Cat series its own odd touch. It's like some kind of über-cartooning. (Plus, the artists would occasionally go all-out for some spectacular effect, like the crackling radio gadgets around the Professor in "The Money Tree.")

These pleasures maintain their joyous hold through the full year of shorts. The stories still rely heavily on the Professor creating new schemes, gadgets, and disguises to steal Felix's bag, but the situations become more absurd as we go. Felix on a pirate ship? You bet! Felix in the Old West? Okay! Explanations are for far more subtle cartoons. New characters are also added. Some a new nemesis, such as underworld underdog Rock Bottom, who starts tangling with Felix in "Detective Thinking Hat," a debut that casts the criminal canine as a satirical strawman for arguments about how "society made me do it." Master Cylinder, the King of the Moon, shows up near the end of the season in a cartoon named after him and establishes himself as a repeat player. The Professor's nephew Poindexter starts appearing in "The Flying Saucer," and he becomes a sidekick of sorts. (Sadly, no Vavoom, the loud-voiced Eskimo who I thought was so hilarious when I was young.)

Even with all that said, I will issue the caveat that all 31 cartoons are a lot to take at once. Since the shorts collected on Felix the Cat: The Complete 1958-1959 Series are lacking in narrative complexity or laugh-riot gags, they are better portioned out over time than shotgunned through all at once. These aren't the kinds of classics I will revisit time and time again like the high-end Warner Bros. collections. I could see myself pulling the set off the shelf when I am sick and just want to veg' out more than Felix is ever going to be the choice of a lackadaisical afternoon.

Still, that's more of an explanatory note than a criticism. Everything in its right place, and all that, and in Felix the Cat: The Complete 1958-1959 Series's right place, I enjoy myself quite a bit, remember what it's like to be a kid, and partake in a few belly chuckles with my pal Felix. 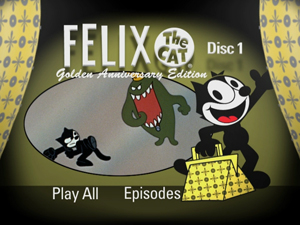 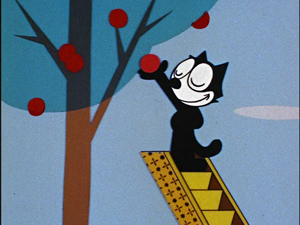 The full list of cartoons on DVD 2:
The Money Tree * Oil and Indians Don't Mix * The Glittering Jewels * The Gold Car and County Fair * Sheriff Felix vs. the Gas Cloud * Felix's Gold Mine * How to Steal a Gold Mine? * Private Eye Felix and Pierre Mustache * The Gold Fruit Tree * The Flying Saucer * Felix Baby-Sits * Instant Money * Master Cylinder - King of the Moon * The Invisible Professor * Venus and the Master Cylinder

Video:
All of the cartoons here are full frame, as they were originally made for television. For the age of these shows, the picture quality on Felix the Cat: The Complete 1958-1959 Series is surprisingly good. The colors are all very nice, and the picture mostly clear. At times, you will notice some flickering, some spots (though some of these are textural to the original animation cells, not a transfer hiccup), and very rarely, soft line quality. These are very small problems, though, and Classic Media and Genius Entertainment should be given credit for producing a package that is competitive with the much larger studios in terms of cartoon preservation. They clearly found some solid source material rather than relying on old syndication prints.

Sound:
The audio is very clean, free of crackles, pops, and hiss. The basic mono soundtrack preserves the sound effects and music very well. There are no subtitles.

Extras:
There are three bonus features on DVD 2 of this collection, and they are as follows:

* Original 1920s Feline Follies Film Short (4 minutes): The very first Felix cartoon. This silent, black-and-white short subject is presented here with music and a nicer picture than the version on Warners' Popeye the Sailor: 1933-1938.
* Interview: Through the Ages with John Canemaker (9 minutes, 15 seconds): A talk with the author of a Felix history book about the origins of the character and how he changed from the 1920s to the version represented here. Quite interesting.
* Archival Promo Reel (2 minutes, 40 seconds): A collection of commercials advertising the show, along with the theme song in Spanish and another language I'm ashamed to say I did not recognize.

I really like the packaging of Felix the Cat: The Complete 1958-1959 Series. Put together like a hardback book, the box opens to reveal the DVDs each on their own separate, facing plastic tray. The graphics on the cover and on the inside are poppy and uncluttered, very attractive. A single-sheet insert gives a list of cartoons along with sluglines revealing their plots.

FINAL THOUGHTS:
Boy, Felix the Cat: The Complete 1958-1959 Series was sure a pleasant surprise! Though maybe too simplistic for sustained adult viewing, these early television cartoons offer unadorned fun for those willing to seek it. Boasting an excellently efficient animation style, this surreal serial has an old-fashioned charm that still holds up on this carefully packaged two-disc set. The character of Felix, always on the run from those who would steal his magical Bag of Tricks, is a genial soul who makes friends with every viewer he meets. I felt like a kid again. Recommended. 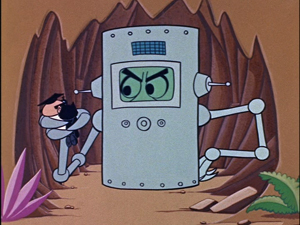 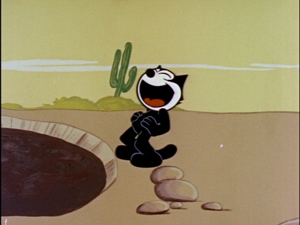