Cautiva (2003) is an unsettling Argentinean film about a 16-year old girl who slowly comes to terms with her unfortunate past. Shot with utmost precision and an impressive sense of composure pic is likely to gather plenty of support amongst North American art-house aficionados.

Cautiva opens up with historic footage from Argentina's victory over Holland in the 1978 World Soccer Cup. The country is ecstatic, the national pride at all time high. In the days to follow the Army would take control over the state initiating the "dirty war".

The main protagonist here is a young girl who undergoes a tremendous emotional shock when a high-ranking state official reveals the identity of her true biological parents. Slowly overcoming the initial shock the girl begins to reconstruct a past she never knew existed.

Cautiva certainly is an intriguing hybrid of a film. Even though the audience is introduced to a plausible story with a good dose of suspense the main protagonist is never the focus of attention. Yes, there are fragments of the story where Gaston Biraben appears concerned only with the girl's inability to assimilate the avalanche of shocking news. Yet, in its very core this is a film with a universal message, a cry for justice in a land where crime has remained unpunished.

The feeling of anger oozing from the screen however is undeniable. It is powerful, in-your face, and unforgiving. Pic's message is well-calculated and for obvious reasons pointing a finger at facts Argentina's democratic governments have chosen to neglect.

In the grand scheme of things Cautiva compares well to Luis Puenzo's Oscar-winning The Official Story (1985). The raw footage from the opening scenes as well as factual info supplied at the end bring a sense of authenticity which holds the story together. The audience is allowed to read between the lines and the political motivation behind the story never affects pic's convincing tone.

The technical presentation is equally impressive. The camera work is complementing of the main protagonists and their actions but notably reserved allowing emotions and feelings to be easily absorbed. The original soundtrack by Jose Luis Castineira de Dios is truly powerful matching well the spirit of this film. 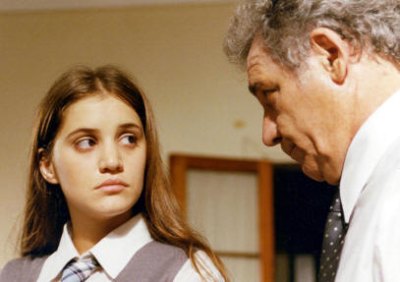 Presented in its original aspect ratio of 1.85:1 and enhanced for widescreen TVs the pirnt provided by Koch Lorber Films is mostly in good condition. Contrast is slightly less impressive than what I expected with occasional dust marks popping through out the film. The color scheme varies quite a bit as during selected scenes it appears that the director has opted for a particular "muted" effect which is sync with pic's nostalgic aura. Edge-enhancement is indeed present occasionally but I was not overly distracted by it. Finally, this does appear to be a progressive print so those of you with advanced home systems should be satisfied by the overall look of this disc.

Presented with a Spanish DD track and optional English subtitles the audio presentation is without major issues. The dialog is easy to follow while music is well balanced throughout. I did not detect any disturbing pop-ups or hissing(s).

Unfortunately the only extra bit you could find here is the original theatrical trailer. It is somewhat of a letdown to find that there is nothing else to compliment this film given how potent its story is.

A great film! Well-executed, intelligently-scripted, with a powerful message! The presentation by Koch Lorber Films is acceptable while far from the studio's best work. Based entirely on the strengths of the main feature: RECOMMENDED.