Winner of the Barcelona Film Award for Best Screenplay (Albert Espinosa) Tu Vida en '65 a.k.a Your Life In 65 packs enough humor and drama to persuasively confuse the viewer as to what its true agenda is. Likely to surprise domestic aficionados with its realistic take on social dysfunctionality pic could become an unexpected hit.

Dani (Javier Pereira), Francisco (Marc Rodriguez) and Ignacio (Oriol Vila) discover that an old friend of theirs, Alberto, has passed away. They decide to attend the funeral where they meet Carmen (Nuria Gago), Dani's ex-girlfriend, and Alberto's sister Cristina (Tamara Arias).

During the ceremony the boys realize that Alberto isn't their friend and quickly walk away. In the meantime Dani falls for Cristina and has a difficult time expressing his feelings. He is also unsure whether or not to tell Cristina that he and his friends never knew her brother.

A dialog-driven feature with strong and believable characters Your Life in 65 bears some notable resemblances with Cedric Klapisch's Russian Dolls (2005). Uncertainty and maturation (the protagonists are slightly younger in 65) appear to be the leading themes here countered by the notion of right vs. wrong.

Pic is divided into two parts with the second piece holding more of a dramatic feel for the story. The plot benefits from never-ending complications which gradually transform the main protagonists, the roles they are seen playing during the opening scenes. By the end, careful analysis is needed to make sense of it all.

In the grand scheme of things pic has a slightly more serious tone than what one would expect. The dilemmas the main characters are faced with are too complicated to address, especially given their age. On the other hand this is one of pic's strongest assets, negating meaningless humor Hollywood is fascinated with.

Your Life in 65 benefits from a trendy soundtrack with a notable presence of The Cure's In Between Days. 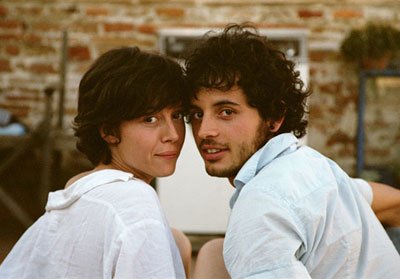 It is very unfortunate that Strand Releasing bring so many great films to the US market yet they all wind up being marred by mediocre presentations. This DVD isn't an exception to this unfortunate trend.

Presented in its original aspect ratio of 1.85:1 but not enhanced for widescreen TVs the print provided by Strand Releasing appears to have been sourced from a PAL master. There is plenty of "ghosting" here, lack of detail, and an annoying amount of color-fluctuations. Contrast is quite mediocre and for the most part really far and away from what I suspect this film looked like in theaters. In fact, the overall look of the film is uncomfortably dull and notably detracting from its charm.

Presented with a Spanish DD track and imposed English subtitles the audio presentation is somewhat acceptable. Dialog is easy to follow but the soundtrack isn't served justice. A more elaborate mix certainly could have been the more logical choice. Overall, given the video treatment I am not surprised with the quality of the audio presentation.

Aside from the original theatrical trailer and trailers for other Strand films there is nothing else to be found on this disc.

Yet another great film delivered by Strand Releasing and yet another unfortunate presentation is what we have here. It makes me feel sad knowing how diverse the company's catalog is and how little care the films they own receive. If nothing else at least an anamorphic transfer should be the norm. Rent It.