Arriving as a double DVD set Fabio Montale offers three episodes: Total Chaos, Chourmo, and Solea. Episode 1 and 2 appear on the first disc while episode 3 is on the second disc.

All three episodes focus on a murder, or a mystery as the creators of the series like us to believe, which presents the character Delon plays with difficult to solve dilemmas.

In Total Chaos Fabio encounters a childhood friend who has flown back to France from Miami to set the record straight with a local mobster. When he is killed Fabio finds himself in the middle of a much more complicated affair.

Chourmo evolves around the fate of Fabio's cousin Guitou. During a passionate rendezvous the cousin witnesses a brutal murder. His girlfriend leads Fabio to a social-worker who is consequently shot. Shortly after it becomes obvious that local police officials might be involved in the crime.

Solea transports us to the time when Fabio has finally retired. After a loud party Fabio discovers the woman he has been celebrating with killed - an anonymous voice then asks him to eliminate a nosy reporter who has become a threat to the mafia. 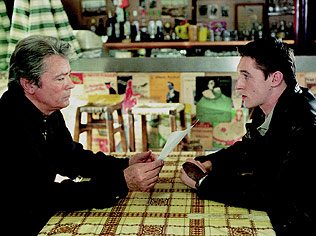 Produced in 2001 Fabio Montale is far more mature of an effort than what I expected. The three stories are well-scripted, with fascinating protagonists, and intelligently produced. Delon plays the tired and disillusioned cop to perfection, often keeping silent, contemplating the past. With a bit of imagination one could surely guess that this was the man who played Le Samourai.

Each of the three stories is also well-balanced. A crime is committed, a possible suspect is identified, and a small twist is later on introduced. The mystery-element however mentioned earlier in this review is far from being a true enigma. It is rather a key lead linking the crime to the killer which has been intentionally left out.

Technically Fabio Montale is also quite impressive. Cinematographer Jacques Boumendil does a stellar job in capturing the spirit of Marseille - long continuous shots, focus on detail, a sustained rhythm are his forte.

I am unsure how these series will fare amongst American TV-fans. More often than not each of the three episodes feels as an individual feature. If not for Fabio's reappearance these episodes could have successfully been advertised as independent films and chances are they would have gathered plenty of good reviews. Of course, the main selling point here is Delon who hardly ever commits to a serious project anymore. Fans of his work would certainly want to give this set a chance.

Presented in an aspect ratio of 1.78:1 Fabio Montale has not been enhanced for widescreen TVs. Even though the back cover of this disc states precisely the opposite. The actual print appears to have been sourced from a PAL-print, most likely the available double French DVD set, as there is enough evidence here suggesting improper conversion. "Ghosting" is prevalent and for the most part quite distracting, the color-scheme is anything but convincing, and contrast is only at the "acceptable" mark. Edge-enhancement is also an issue, especially on Solea, and I suspect that those of you with more sensitive home set-ups will be annoyed by its presence. As far as I am concerned what Koch Vision have done here is simply copied the French disc improperly thus granting their release plenty of the issues we attach to such conversions.

The discs arrive with a French DD track and optional English subtitles. Dialog is easy to follow and music appears well-balanced with the rest of the audio information. I did not detect any disturbing drop-outs or hissings. The English translation is quite well done and without notable omissions from the French dialog.

There are no supplemental materials to be found here.

I enjoyed the three episodes in this double set quite a bit. They are a much more mature effort than what I suspected they might turn out to be. Alain Delon is as impressive as ever and fans of his work should definitely give these series a chance. The presentation by Koch Vision is lacking a bit but I suppose this is the best they could do given the limited market audience this set is likely to attract.