An edgy tale about an aging social worker and her obsession with a younger boy first -time German director Angelina Maccarone's Verfolgt a.k.a Punish Me (2006) is likely to gather plenty of momentum amongst those looking for bold and unconventional cinema.

50-year old Elsa (Maren Kroymann) is responsible for troublemaker Jan (Kostja Ullmann). She follows his progress at the local center for delinquents and even gets him a job with her partner. But Jan has an unusual interest in Elsa. The unlikely duo embarks on a controversial S&M affair.

Shooting a film where the main theme is a torrid S&M affair between an older woman and a significantly younger boy isn't the easiest of tasks. Certainly one is likely to gather plenty of criticism for overstepping the boundaries of "serious" cinema. For a good reason? Not unless you have a very narrow definition of what "serious" cinema should entail. Yet, I know that just by reading the synopsis for this film many would grimace, shake their heads, and quickly disregard it. I am certain of it.

And many will be missing on a great, incredibly well-acted film!

Shot in provocative black and white and notably devoid of flashy camera-work Punish Me offers an inside look at a lifestyle moralist watchdogs love to attack. Pain as a premise for a lasting relationship indeed isn't the most common of reasons people cite when building a union. Yet, there certainly are exceptions.

Depending on whether or not one is willing to accept that such a union is actually capable of surviving Punish Me could be an intriguing experience. In fact, pic's flawless examination of the two worlds the main protagonists belong to is far more interesting than the "technical" side of the S&M affair--the events leading to Elsa and Jan's friendship is where pic's strength is. 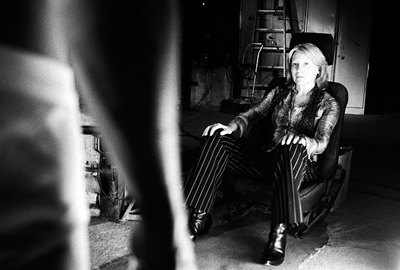 There are two aspects of Punish Me which more than likely will force me to rewatch it in a near future. First, it is the character transformation Elsa is seen undergoing -- the rapid exchange of moods before the submissive acts is unbelievable. Second, it is the incredible performance by Kostja Ullmann which de facto controls the tempo of the film. The youngster's acting is so convincing that a number of times I felt as if someone had placed a thousand pound concrete block on my chest.

Presented in its original aspect ratio of 1.85:1 and enhanced for widescreen TVs the film looks exceptionally good. The black and white texture is very impressive, the grainy look in particular matching pic's aura flawlessly. Contrast is also handled exceptionally well with the indoor scenes in particular revealing a near-documentary look. The overall state of the print is also impeccable - progressive, properly converted, without scratches, dirt, or debris. Edge-enhancement was not an issue of concern either. To sum it all up this, as expected, a very well-produced disc well in tune with PictureThis Ent and their previous body of work.

Presented with a German 5.1 and 2.0 tracks the film sounds great. Dialog is very easy to follow and I did not detect any disturbing drop-outs or hissings. The optional English subtitles are very well made preserving the integrity of the actors' speech.

Aside from three different trailers for the film (two North American versions) and a gallery of trailers for other PictureThis Ent. product there is nothing else to be found on this disc.

Bold, sensual, and perverse Punish Me is a daring exploration of a world we rarely see addressed in mainstream cinema. The film is incredibly well-acted delivering a degree of nervousness I have not experienced since Christophe Honore's Ma Mere. Highly Recommended.