Every morning Ahmad (Ahmad Razvi) drags his large metal cart to a busy corner of an unknown New York City street. He sets the coffee and tea aside, arranges the donuts, and gets the paper cups stacked next to the sugar. Then he sells. Occasionally Ahmad would exchange a word or two with his customers - - they would smile, he would wish them luck, and hand back the change.

Man Push Cart is first time writer-director Ramin Bahrani's venture into the realms of independent cinema. Gritty, with a great sense of composure, and surprisingly poetic pic meshes race, prejudice, pain, anger, and hope in a memorable collage of images evoking parallels with the work of the Italian neo-realists (De Sica's Bicycle Thieves).

The focus of attention here is a middle-eastern immigrant whose life is portrayed as a never-ending struggle to remain truthful to a spiritual credo in harsh disagreement with reality. A former rock-star whose wife has tragically died Ahmad is forced to endure an avalanche of classist jabs, humiliation, and ill-treatment.

Man Push Cart is an incredibly quiet film filled with sorrow. The sense of loss is remarkably well spread out as even during moments of joy and affection (Ahmad's encounter with a Spanish girl working at a nearby news stand) there is a nagging feeling of doom and torment. The sporadic memory flashbacks seen throughout suggest that an unspeakable tragedy is the reason why Ahmad suffers.

What really strikes as unusual however is how well Bahrani manages to capture the desperation in Ahmad's soul. He is played with, "befriended", and eventually rejected for various reasons which analyzed carefully provide a very telling look at the American perception about different. A sad one.

Bahrani's film was finished in 2005, exactly four years after the September 11 tragedy. Times have changed, the country has changed, people have changed. Many believe that on that tragic day something precious was lost. We all became more or less suspicious of each other, ignorant of each other's personal struggles. We stopped caring. 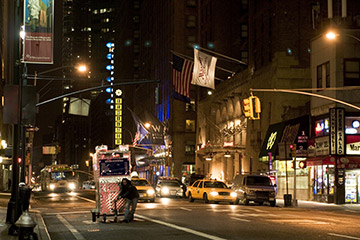 Ahmad's story is very much a testament of what has been lost, where our country is headed. It is an intimate story of survival, pain, and a desire to remain human. As cliché as it may sound it is also a story about what has become of the American Dream, and those who come to this country to seek it.

Presented in its original aspect ratio of 1.85:1 and enhanced for widescreen TVs the print provided by Koch Lorber Films is in good condition. It is clean, with good color gradation, acceptable contrast, and notably devoid of edge-enhancement. This being said one should keep in mind that this is a low-budget independent film. Even though contrast and lighting are addressed with proper care the overall look of the film isn't crisp, glossed over. There is a certain raw effect to it which is in perfect synch with pic's agenda. To sum it all up the transfer is incredibly strong leaving little to be critiqued, if at all.

Presented with a DD track, a mix of Urdu and English, the disc sounds very well. Dialog is very easy to follow and I did not detect any audio drop outs or hissing. Once again it is evident that this is a low-budget film which has received a low-budget treatment but the overall clarity of the sound is very impressive. I truly have no reservations here. With optional English subtitles.

In addition to the original theatrical trailer and two short films (Bad Reception and Dogs), the second one shot in Greece and quite well done following the fate of homeless dogs, there is a great audio commentary with Ramin Bahrani, cinematographer Michael Simmons, assistant director Nicholas Elliott, and actor Ahmad Razvi. The group goes in great detail about the history of this project, its message, and how everything was made possible even though it appears that most of the time they are arguing about their personal film preferences (Antonioni's name is mentioned more than a few times). I would indeed recommend that you listen to it if the film moves as much as it moved me.

One of the best independent American films I have seen during the last five years, if not the best one, Ramin Bahrani's Man Push Cart is a breath of fresh air in a sea of pseudo-independent pictures, often of questionable quality. Honest, incredibly well-scripted, and perfectly executed this film is everything independent cinema should be. I could not recommend it highly enough.