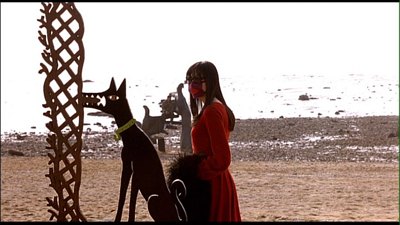 Kim Ki-Duk's films have made me squirm before, but never in the very first scene. His latest North American release, Time, opens with some rather gruesome footage of a plastic surgery operation that is not for the faint of heart. If, like me, you hit the "next channel" button as fast as you can whenever you see that E! is showing an episode of "Dr. 90210," be prepared.

You'll be okay after that, though. Ki-Duk gets it all out of his system in one go. The rest of Time is less visceral, making it a bit of a departure for the Korean filmmaker as far as his non-spiritual pictures are concerned. The writer/director spends the movie ducking and weaving around our expectations. This can make Time a little slippery at times, but it never fails at being interesting.

Seh-Hee (Park Ji-Yeon) is convinced that her boyfriend, Ji-Woo (Ha Jung-Woo) is growing bored with her. They've been together for two years, and she sees him looking at other girls. Rather than risk being dumped, she goes to a radical plastic surgery clinic and has her face entirely redone. Over the six months that her scars heal, she keeps an eye on Ji-Woo, interrupting any date he might have and scaring off his potential new girlfriends. She can't see him yet, but she wants to make sure that he doesn't forget her.

Once her new look has solidified, Seh-Hee returns as See-Hee (Sung Hyan-ah) and gets a job as a waitress in the coffee shop she and Ji-Woo used to meet each other in. Slowly, she insinuates herself back into his life, and the two become romantically involved. He even takes her to Sculpture Park, an amazing beach full of giant statues that Kim Ki-Duk makes great use of. Visually, it's a wonderful place to shoot a movie, and it even subtly fits with the overall theme of Time. What if Seh-Hee could be like one of those statues and forever freeze her emotions in place?

At this point, I was fairly convinced that Time was going to be a psychological thriller of the Single White Female-variety, but Ki-Duk has other questions to ponder. With Ji-Woo back in her arms, Seh-Hee/See-Hee is surprisingly unsatisfied. While she likely expected to prove that love goes beyond one's physical appearance and is about what is inside a person instead, she doubts Ji-Woo's reactions. Is he in love with who she really is, or the face of the woman she is now pretending to be? Is it okay for him to move on from the old version of her so easily? Or has she made it impossible for him to ever love the new version of her because the original still lingers?

After a series of tests to see what happens when the prospect of Seh-Hee's return is introduced, Ji-Woo discovers that the two women are the same and the lengths Seh-Hee has gone to make her paranoia flesh. Here again Kim Ki-Duk's script swerves. I assumed that Ji-Woo's motives were pure, that his next move was a tender one where he'd finally prove himself to the insecure girl. This is not the case, and without giving too much away, he turns the tables on Seh-Hee, forcing her to contend with an even higher level of doubt, something akin to the cruel trick she played on him.

Seh-Hee becoming unhinged is a common move for Ki-Duk, something he's done before in movies like The Coast Guard. It actually works in the context of Time, and I have no fault with the script on the face of it (no pun intended). I liked Time a lot, but can't help thinking I would have liked it better had he stuck with what I thought was Ji-Woo's original intentions. This would have landed Time on the side of one of Ki-Duk's more humanistic films, an affirmation of the union that could be achieved between two people a la 3-Iron. Instead, he goes for something more cynical and alienating.

Which is fine. I can handle being cynical and alienated. (Hell, I've very nearly made it a way of life.) It's really my fault as a viewer for wanting Kim Ki-Duk to zig when his instinct was to zag. If nothing else, that means that Time always kept me guessing, and there was never a point when I didn't want to know what was around the next corner. Time, like any of Kim Ki-Duk's other thirteen films, is provocative through and through, a film that leads you along its twisted narrative even as you try to wrangle it to fit your own concerns. 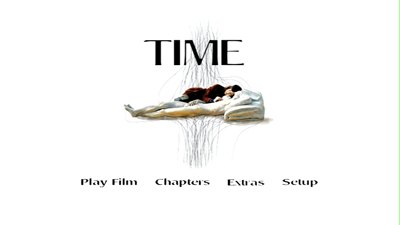 Video:
The 16:9 anamorphic transfer of Time is fairly average. It mostly looks good, but there are moments where the colors run hot and the edges are a little soft. I didn't spot any combing or artifacting, however, and the dark scenes looked good.

Sound:
The original Korean soundtrack is mixed in 5.1 Dolby and has nice atmosphere, with background effects in both the front and rear speakers. The subtitle translation in English was well written, but the letters themselves were a little hazy.

Extras:
The main bonus on Time is forty-five minutes of raw on-set footage, showing the cast and crew at work. It is cut in chronological order without commentary. Interest in this will vary. I found it a tad boring.

The original Korean theatrical trailer is also included. Be forewarned: it gives away most of the plot.

FINAL THOUGHTS:
Recommended. Time is an intriguing feature from Korean auteur Kim Ki-Duk. Though not as openly provocative as some of his other movies, it wins with more subtle psychological twists. By following an insecure girl through her extreme makeover measures, the writer/director is able to pose questions about beauty and the ways we fall in love. While I'd have preferred the film stay on a more emotionally tender path in the final act, Time still doesn't disappoint. It keeps the audience guessing right up until the very end, even letting a few threads continue dangling to ensure we don't get Time out of our heads any time soon. 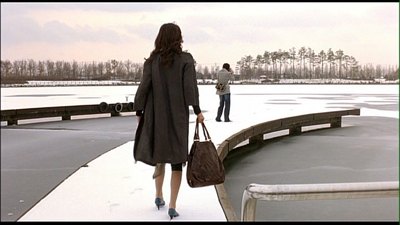