Doll /Ernst Lubitsch in Berlin, The

In 1919, the same year that The Cabinet of Dr. Caligari was released, Ernst Lubitsch filmed The Doll a movie that has many of the aspects that would later be associated with "The Lubitsch Touch."  The part of their 'Lubitsch in Berlin' series, Kino has now released this wonderfully comic film with a new documentary of the important director appropriately titled Lubitsh in Berlin. 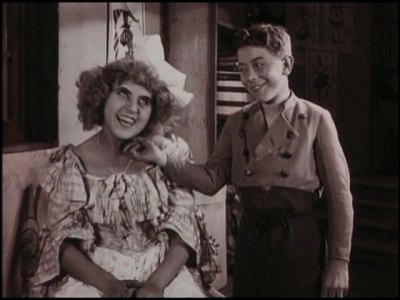 The Baron of Chanterelle (Max Kronert) is worried that he'll be the last of his line.  With no direct descendents, his only hope of keeping the family name alive is his unmarried nephew, Lancelot (Hermann Thimig).   The only problem is that Lancelot is deathly afraid of women.  When 40 maidens arrive at the Count's home in answer to an ad he placed in the newspaper, poor Lancelot jumps out of the window and runs in terror.  Eventually he makes his way to a monastery where he takes refuge with the overweight monks.

Lancelot is contented there, but the brothers are running out of money since they all eat so much.  When the Count places another ad in the paper promising Lancelot a small fortune if he marries, the monks come up with a plan:  a local toy maker, aptly named Hilarius (Victor Janson), has come up with a robotic life-sized doll.  Lancelot can marry it, get the money, and give it to the monastery.  With some fast talking the monks convince Lancelot of the plan and off he goes.

Hilarius has indeed made a life-like doll that is controlled by a panel and crank on its back, but just before Lancelot arrives a young apprentice breaks it.  Luckily the doll was modeled after Hilarius' daughter, Ossi (Ossi Oswalda), so the young girl puts on panel and crack and stands in for the automaton.  When Lancelot sees The Doll/Ossi, he thinks it's the answers to his problems, buys it, and eventually even marries it, never realizing that it's actually a real person.  Ossi is infatuated with Lancelot however, and she has no problems becoming a Countess. 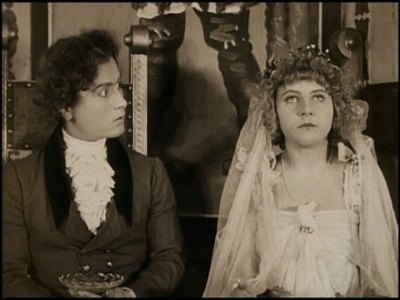 This is a really funny film.  From the opening scene, viewers know they're in for a unique film.  Luitsch himself starts the movie by taking pieces of a set out of a toy box and setting them up.  He places two dolls in the scenery.  The camera then cuts to a close up of the toy set, but the dolls have turned to actors and the movie begins.

The whole production has an unreal, fairy tale-like quality to it that actually accentuates the humor.  All of the sets look like cardboard cut outs, and in a particularly inspired scene, the horses that pull the carriage that takes Lancelot and The Doll/Ossi to the Count's home are men in a cheap horse outfit.

The film doesn't limit itself to sight gags either.  The intertitles are often hilarious such as when Lancelot tries to take off The Doll/Ossi's clothes.  She bats him away and he asks if she can change by herself which earns him a robotic nod.  As the young man walks to the door he stops and exclaims in wonder "That must be one complicated mechanism."

This is a charming, unpretentious, and funny movie.  With many comic scenes and some wonderful acting on Oswalda's part, it's a true gem.  The only real complaint that I have is that the font for the intertitles, which duplicates the one originally used, is to extravagant and hard to read in parts.

This film comes with a stereo piano score composed and performed by Jon C. Mirsalis.  This is a humorous film and the music Mr. Mirsalis plays accents the mood of the film without being overbearing.  The themes are airy and light without ever being farcical or silly.  This is a very nice soundtrack that adds to the enjoyment of the film.

The full frame, sepia toned image looks very good, especially for a film this old, but not outstanding.  The level of detail is fine but the contrast isn't great.  Whites tend to be too bright which causes highlights to be lost.  The doll's dress when Hilarius is paining the smile on its face is a good example of this.  Details also tend to disappear in dark areas, which makes men wearing black suits appear very flat and two-dimensional.  Aside from that the picture is fine.  There aren't any compression defects and print that was used, while there was some slight damage and a couple of missing frames, was fairly clean. 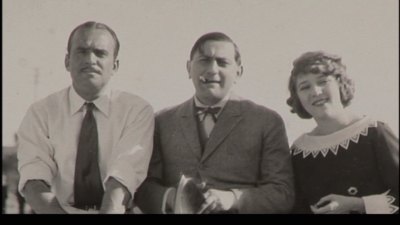 In addition to the Lubitsch fim, there is also a feature-length documentary on the filmmaker's early years:  Ernst Lubitsch in Berlin.  This documentary runs nearly an hour and 20 minutes and features interviews with his niece, daughter, and granddaughter, along with film makers and critics who all discuss the director's time in Germany.  The beginning of the documentary is pretty slow.  They had a lot of footage of a film festival that was presented in Berlin to mark Lubitsch's 100th birthday, and they used too much of it.  Watching a life-sized statue of Lubitsch ride around town in the back of a car just isn't that exciting.

After that slow beginning, things pick up a bit.  The program discusses his childhood, his service in WWI, and joining the famous Max Reinhardt troupe afterwards, and his start in film.  His early films are discussed and illustrated with clips, and the documentary follows his evolution as a filmmaker until 1922 when he leaves for America.  This is a nice overview of these films, and while the documentary is a little 'talky' in places it is a good look at an important director.  It should be noted that much of this film is in German and it has burnt in English subtitles.

A great film that clearly shows Ernst Lubitsch's talent, The Doll is still as funny today as it was nearly 90 years ago.  The documentary that's included with this disc is a nice bonus and while it does drag in parts, it has a lot of information about the famous director.  One of the strongest entries in the Lubitsch in Berlin series, this disc is highly recommended.