Real-life couple Jennifer Lopez and Marc Anthony star in El Cantante (2006), a film based on the life of salsa legend Hector Lavoe. Brisk, flashy, and graced by a beautiful soundtrack pic goes the extra mile in telling what many in America have known for years: Lavoe's music will be remembered forever. 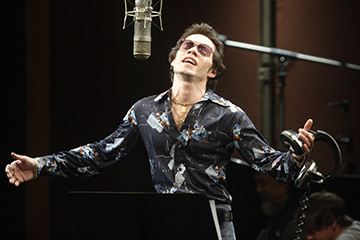 It is easier to criticize than praise what Jennifer Lopez has achieved in cinema. A weak and mostly disappointing streak of films where she played questionable characters with even more questionable lines certainly explains why. Even better, a larger than life ego and a phenomenal success in the pop biz to top it off...what better excuse for the masses to spare a jab or two at the Latina.

Now put aside whatever issues you might have with the image Lopez has earned and look pass the constructive criticism. Try to forget the diva and her success for a minute.

So, here we are. The 70s, the salsa explosion, the wild New York nights, the drugs, the music, the scene. A rising star by the name of Hector Lavoe (Anthony) has moved from Puerto Rico to the States looking to make it big. Endless parties, more drugs, sex, and one woman to put everything together: Puchi (Lopez). Love and plans of having a family are rocked by more drugs, unexpected hits at the Billboard charts, and eventually a painful break up. AIDS claims what the drugs couldn't.

El Cantante is as much of a film about music and musicians as it is a story about drug addiction and convalescence. A blinding mix of color, sound, and lyrics pic is as enticing to behold as it is impressive to listen to. More importantly it is truthful and indicative of a time when excess was king.

And so was Hector Lavoe. In his own, unique, way the charming Puerto Rican immigrant embodied everything the dark side of greatness has to offer: pain, anger, alienation, all shrouded in music people would never guess originated from a disappointingly weak yet astoundingly gifted man.

Despite the sea of negativity towards Lopez and her involvement with El Cantante I found this film to be surprisingly good. The chaotic approach to crucial events from Lavoe's life where his talent and vice(s) are seen battling an uneven fight works incredibly well. As a result from the opening scenes to the final credits El Cantante comes off as a wild rollercoaster of emotions some viewers may find difficult to rationalize.

Lopez's impersonation of Puchi is arguably her best performance to date. Determined, cocky, and madly in love with her man Puchi is often the center of attention, she is as big as Lavoe. Naturally, the couple is seen struggling to overcome their differences, fighting over asinine arguments, almost completely ignoring their son. The gradual erosion of trust between the two leads to some tragic events. 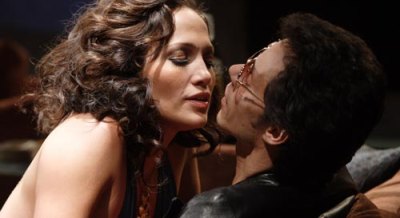 El Cantante is a sincere effort at retelling the life of a man with controversial legacy. Its universal message though familiar is as strong and uncompromising as is show business, those who belong to it. It is also telling about the personal demons superstars must confront and the toll they end up paying. Sadly, pic's high-powered cast appears to have instigated more negativity than genuine interest in its subject.

Presented in its original aspect ratio of 1.85:1 and enhanced for widescreen TVs the print provided by New Line is in top notch condition. Wild and lush colors, great contrast, and excellent detail is what we have here. The intended heavy grain during some selected scenes is addressed flawlessly, it is neither too heavy nor being glossed over. Edge-enhancement is also hardly an issue, aside from a few scenes during the second half where I noticed its presence overall the print looks fantastic. Furthermore, New Line have done an excellent job of converting this print progressively - the image quality is fabulous.

El Cantante offers a rich and vibrant soundtrack with plenty of Lavoe's hits. Fortunately enough New Line offer an English/Spanish 5.1 mix and a DD track both of which deliver the goods. The 5.1 mix truly brings the atmosphere from Lavoe's live shows to life with an excellent and somewhat unexpected crispness: the brass section and Lavoe's voice are balanced incredibly well. The dialog is mostly in Spanish and English, continuously overlapping, with the relevant Spanish bits offering English subtitles (I must note that the Spanish text of Lavoe's songs is also translated). With optional English, HOH, and Spanish subtitles.

In addition to the original theatrical trailer and a short deleted scene titled Say No To Drugs the disc offers two commentaries, one with director Leon Ichaso and a second one with writers Todd Anthony Bello and David Darmstaedter. I ran both of these commentaries in their entirety and suffice to say they are both revealing, truly supplemental bonus that will assist you in understanding what takes place on the screen. Mr. Ichaso's commentary appears a bit more personal and obviously more telling about the technical merits of this production. He spends a great deal of time addressing the period element in his film (why certain images are being composed in a certain way, the people who were involved with Lavoe daily, the locations where the team shot most of the footage). The second commentary has a substantially more relaxed tone. The two writers focus on the history behind this project (which was in fact initiated back in 2000) as well as how it was all made possible by the parties involved - Lavoe's manager, Puchi, etc. What I found beneficial here is the two writers' constant desire to expand on events the film does not address adequately (Lavoe's antics in particular).
Next, there is lengthy interview by Puerto Rican recording artist Nydia Caro with the producer of the film David Maldonado where he addresses the production as well as Lavoe's legacy.

El Cantante is a surprisingly mature-looking film investigating Hector Lavoe's controversial persona immaculately. Director Leon Ichaso's approach to the subject is well-calculated and convincing, very much recreating the sense of chaos that overtook the salsa legend's personal life. Jennifer Lopez is equally impressive, at least as far as this reviewer is concerned, proving that with the right script in hand she could be a pleasure to behold. Highly Recommended.