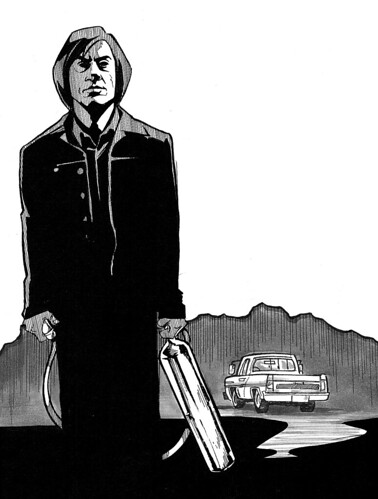 There is a dread that lingers long after No Country for Old Men has gone through its closing credits. Long after Tommy Lee Jones speaks his final lines, long after you've realized that this movie is not about what you thought it was, but about something else entirely. That dread is what another character, the El Paso sheriff that shares a meal and some wisdom with Jones, calls "the tide." It's not one thing that changes the world for the bad, he says, but the whole tide of things that will overwhelm you.

No Country for Old Men is adapted from the 2005 novel by Cormac McCarthy. It has been brought to the screen by the Coen Brothers, and despite the fact that they worked with their long-time cinematographer Roger Deakins, it doesn't really look like a Coen Bros. movie. It doesn't feel like one either, it doesn't move like one. In fact, had you played me this movie cold and told me nothing about who was involved, I wouldn't have guessed in a million years. I'm a big fan, too. I even liked The Ladykillers, which most people rip on pretty freely. It's been three years since that movie was released, and No Country for Old Men suggests that the famous filmmaking duo thought long and hard about how they would return to the Cineplex after that failure. For two guys whose early reputation grew fat on stylistic innovation, this quiet reinvention of what they are about is no less than astounding. Gone are the visual tricks and the hyperactive cameras, and in their place is something mannered, complex, and foreboding.

The plot of No Country for Old Men revolves around a satchel of money. While out in the Texas desert hunting, straight-laced welder Llewellyn Moss (Josh Brolin) happens upon the remnants of a drug deal gone bad. He finds the $2 million in cash that was intended to be the buy money and makes a rash decision to take it home, leaving the lone survivor of the bloodbath to die on his own. Feeling guilty, he returns to the scene in the middle of the night, only to be spotted by bad guys who want their money back. Barely escaping alive, Llewellyn sends his wife (Kelly Macdonald) off to her mother's and goes on the run.

Too bad for him his pursuer is a one-stop death machine. Anton Chigurh, played with a seething menace by Javier Bardem, started his killing spree before he even got to the mess in the desert, so Llewellyn is just going to be another notch in his belt. The simple act of filling up his stolen car with gas is like an existential exercise in flexing his muscles. There is nothing Anton does that won't end in someone bleeding out on the floor.

Add to the mix Tommy Lee Jones as the local sheriff and you have the three main ingredients in this Texmex recipe. Though no one would blame you for thinking Jones is once again playing the same role he's been playing for the last ten years, it's been a long time since he's been this good. His take on Sheriff Bell could have been just another run-through of the actor's good humored cynicism and cornfed homilies, but Jones rightly sensed that he was the true emotional center of No Country for Old Men, the spiritual avatar of its deeper themes; as a result, he sheds the skin of easy comfort that he's worn through most of his recent films and let's his soul back out. Just as the Coen Bros. appear to be blazing new trails for themselves, dropping their old tricks for serious storytelling, so Jones seems to have wearied of his homespun image and has decided to put that weariness on film.

Essentially, No Country for Old Men is a four-pronged chase picture. Bardem is on the trail of Brolin, the money men and dealers team up to chase them both, and Jones is chasing all three. When they do catch up with one another at different times in the picture, the results are unexpected and harrowing. Yet, each twist of the plot strides in on a very comfortable gait. The Coens don't rush it when it doesn't need to be rushed, and they never inject a scene with an inflated sense of peril. There is time enough to get where they are all going.

Or so it would seem. The ironic thing about the pacing of No Country for Old Men is that ultimately, despite the lack of panic, time is running out. It's a eulogy for a particular way of life, a lament for dying values. Anton Chigurh, with a name that sounds like the sweetest confection, is a force of nature that has come seemingly out of nowhere, and he represents the future less than he represents the divide. He twice lets his victims gamble on their life, the call of a flipped coin determining if they win or die. The old sheriff is heads, a thinker who follows a code and predetermined ideas, whereas Llewellyn Moss is tails, running on instinct, making choices that his counterpart would never make.

Even with all the dead bodies that litter the road these men travel, the most devastating part of No Country for Old Men has nothing to do with blood, guns, or any of that stuff. Those are not the things that linger. Hell, most of the more surprising bends in that road (and there are several near the end) eschew those elements altogether. The true brutality is the passage of time, in our awareness of it, and in the inevitability of the countdown. Like Chigurh, it can't be stopped. Not by pure stubborn action, not even by the capriciousness of chance. Perhaps it's better to be like Llewellyn and try to remain ignorant of what lies ahead, because when it's all down to the wire, there is no comfort in acceptance.