In 1922 F. W. Murnau burst onto the international film scene with his horror masterpiece, Nosferatu.  Though Murnau's films had been noticed before this one, none of them had achieved the critical success as this study in terror. This important film, one of the most widely know silent classics, has now been restored in high definition and released on DVD by Kino.  This same company put out a version of this film in 2002, but this new release, entitled "The Ultimate DVD Edition" looks much better and is worth the upgrade. 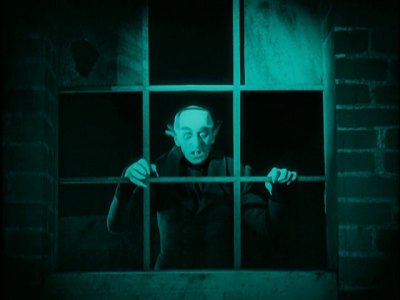 Most people familiar with silent films have heard the origins of this film.  When the creators did not want to go to the expense of purchasing the right to Bram Stoker's Dracula, they changed the names and made it anyway.  They did pare the novel down to its core essentials, but at its heart, it is still Dracula.

Real estate agent Thomas Hutter (Gustav von Wangenheim,) is sent to the Carpathian Mountains to finalize the sale of an estate to Count Graf Orlok (Max Schreck.)  Laughing off the locals warnings, Hutter travels to Orlok's castle, but soon stops laughing when he sees the eerie looking Count.  After completing the sale, Orlok sees an image of Hutter's wife, Ellen (Greta Schröder) and departs for her town of Bremen by boat.  When the boat arrives, all the crew are dead, and rats flee the ship.  Orlok wants to feed on Ellen, but her husband realizes the danger she is in and is hurrying back to protect her. 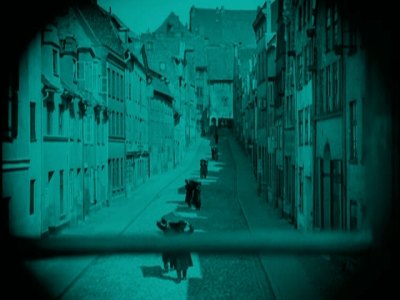 This film is a masterpiece of horror and of German Expressionism filmmaking.  The more often you see this film, the more amazing it gets.  The low camera angles, sharp contrasts, and dreamlike atmosphere all come together to form a distortion of the real world.  This distortion makes the movie oddly unsettling, and the introduction of Count Orlok greatly adds to the eeriness.

The acting was superb all around, but Max Schreck was simply amazing.  His portrayal of Graf Orlok was both horrifying and intriguing.  You couldn't look away from his odd appearance.  This vampire was no suave, elegant gentleman like Bela Lugosi portrayed him. Schreck's character was a ghastly dead creature, more rat than man.  The talon like finger, large deep set eyes and unnaturally long ears made him look inhuman.  His acting accentuated the evil in his character that matched the decaying exterior. No one would ever play the lord of vampires so effectively again. 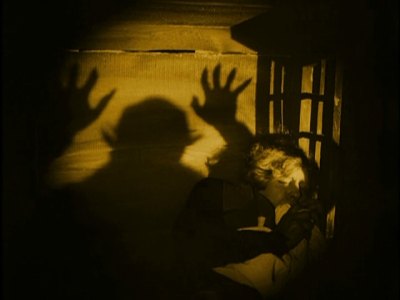 What this all boils down to is that this is a fantastic movie.  It works on many levels; it is artistic, innovative, and even beautiful.  There are images in this movie that will stay with you long after the film is finished:  Orlok rising out of his casket on the ship, his shadow moving up the stairs, and the row of coffins being carried down the street, just to name a few.  Murnau's use of shadow is masterful, creating eerie scenes with only light and darkness.  Of all the adaptations of Dracula that would come after this, Nosferatu is still the best.

After the movie was released, Stoker's wife sued, and eventually won a court settlement that included the burning of all copies of the film.  Luckily, there were prints that escaped the flame in other countries.  It is ironic that Florence Stoker wanted the film destroyed, since many film historians note Nosferatu's popularity as a reason that Dracula was turned into a stage play and the later a movie, thereby giving eternal life to her husband's greatest work.

This "Ultimate Edition" DVD presents the movie twice:  Disc one has the film with English intertitles and disc two has the original German titles with optional English subs.  All of the extras are found on disc one.

The disc comes with the Saarbrucken Radio Symphony Orchestra performing Hans Erdmann's original 1922 score for the film in both stereo and a 5.1 mix.  The surround mix was nice and really filled the room with sound, and the orchestra did a wonderful job with the score.  The only problem was that the music didn't fit the movie very well.  Even though it was specifically written for this movie, a lot of the music seems inappropriate.  When Hutter gets in the phantom carriage for the rapid sprint to Orlok's castle, for example, the music starts out rather slow and sedate and never accents the terror of the ride.  It was a little overpowering in parts too.  Even so, I've heard worse audio tracks to silent films and I am glad that they included this track so that film buffs can hear what it would have sounded like in 1922.

The video quality looks very, very good.  The tinted full frame image has been restored in HD, and looks significantly better than the earlier Kino release.  The level of detail is fine, and the contrast is very good.  There are still some sections were the image will go out of focus for a second, such as when Orlok's carriage first appears as it comes to collect Hutter.  This is presumably because they used inferior copies of the film to fill in missing frames.  This isn't too distracting however.

In comparison with the earlier Kino release, this version has a more natural look.  The 2002 disc had the sharpness boosted a bit too high in parts, and this restoration corrects that.  The image on this version has a warmer, more realistic look to it, but there is a small amount of detail that has been lost.  A bit more of the frame is shown this time around too, with more information at the bottom and sides.  There are significantly fewer scratches and dirt spots on this version also.  The print has been cleaned up to a large extent and the tinting isn't as dark and these factors make this film even more enjoyable.

While this is an excellent looking DVD, it's not quite perfect.  The highlights still tend to be washed out, and the image is a bit soft in places.  These are minor defects though, and barring the discovery of another print, I doubt that this film will look much better than this.

The set comes with some nice extras.  First off is a 53-minute documentary:  The Language of Shadows.  This covers Murnau's early years and is quite interesting.  The film discusses his earliest films and even includes clips from some of these that are now lost.  With images from surviving notes and scripts, viewers can get a feel for what some of these films might have been like.  Of course the creation of Nosferatu is covered in depth.  The filmmakers search out the streets and exteriors that were used in the film and quote from production diaries and written accounts of the shooting.  The film's reception and how the art director Albin Grau had turned to occultism a few years after he finished working on Nosferatu.  A very good look at Murnau's early work.

There is also a three-minute look at the restoration process (in German with English subtitles) and a scene comparison which presents an excerpt from Bram Stoker's novel, Henrick Galeen's screenplay and the finally the filmed sequence.  Eight film clips from Murnau films are included, which run between 3 and 11 minutes each, and a nice photo gallery rounds out the extras.

This is an excellent film, one of the all-time classics of silent cinema.  This new restoration improves on the earlier release, which didn't look bad at all.  With the new documentary about Murnau and the improved image, this disc is worth getting even if you have the earlier disc that Kino put out.  Highly Recommended.