Faithfully adapted from E.M. Forster's 1908 lushly romantic novel contrasting Edwardian England's repressive upper-class with "improper" British free-spirits and unpretentious working-class Italians, A Room with a View (1985) was not the first Merchant-Ivory production (the company dates back to the early-1960s) but its unexpected international success established the company's esteemed reputation worldwide. Produced on a modest budget of about $3 million, the film caught the fancy of American viewers, grossing nearly $21 million in the United States alone and ultimately winning three of its eight Academy Award nominations. 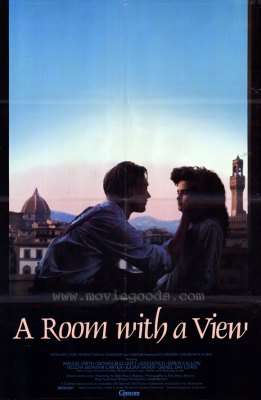 Lucy Honeychurch (Helena Bonham Carter) is on holiday in Florence, Italy with her spinster cousin Charlotte (Maggie Smith) acting as her chaperone. Charlotte is a fussy, manipulative woman, and when she complains over dinner that they had been been promised a room with a view, English tourists Mr. Emerson (Denholm Elliott) and his son, George (Julian Sands), who have an excellent view but no real want of one, freely offer to exchange rooms with the women. However, Charlotte sees such a bold offer from such unconventional strangers as extremely improper, rather than a simple act of kindness.

The room-swapping is awkwardly resolved, but soon the brashness of George's growing affection toward Lucy attract and repel her. Later, at the Piazza della Signoria, the two witness a brutal murder of a local man just a few yards away and George catches Lucy as she faints. Later, in the barley fields of Fiesole, George and Lucy meet accidentally, and out of the blue he passionately kiss her. This supposedly scandalous behavior sends Lucy and Charlotte scurrying back to England.

There Lucy becomes engaged to Cecil Vyse (Daniel Day-Lewis), a professional aristocrat, a passionless stiff who resembles a foppish undertaker. But, as fate would have it, the Emersons have moved into a nearby cottage, ironically recommended to them by Cecil. Rushed into her unlikely engagement by her confusion over her feelings for George, Lucy now must choose between them.

Though Merchant-Ivory's Howard's End (1992) remains their definitive E.M. Forster adaptation, A Room with a View's lighter and certainly far more optimistic story and less critical attitude toward upper-class stuffiness resonated with audiences. Bonham Carter is perfectly cast, baby-faced yet already on the verge of becoming an old woman through the repressiveness of British societal obligations. The film's title underscores the most obvious of the film's many contrasts: those like Cecil who lock themselves away with their possessions (of which his intended bride clearly is regarded as a prized acquisition) in their ornately decorated "rooms" with the passionate, beautiful, and occasionally dangerous outside world, which the Britsh tourists straddle in their "views" of the Italian countryside.

The ensemble cast is marvellous, aided by Ruth Prawer Jhabvala's exquisite screenplay, which hands them telling, delicate dialogue. The richest characterizations come from the supporting players: Maggie Smith, whose Charlotte feigns helplessness and selflessness to manipulate others to get exactly what she wants; Elliott's Mr. Emerson, a Joe Gargery-like character of charming unpretentiousness; Judi Dench as novelist Eleanor Lavish, whose self-declared, affected worldliness is merely another form of British imperiousness; Simon Callow (in his second film, following Amadeus) as the very British Reverend Arthur Beebe, the type of character one finds in an Ealing comedy.

This BBC Video release is a minor revelation and vastly superior to A Room with a View's 35mm prints shown in America. I remember seeing the film in a shoebox-sized art-house theater and how grainy the film was and general blahness of the color. Though shot in standard 35mm for 1.66 theatrical exhibition (the HD DVD is 1.78:1), the resolution on this release is quite strong for a film of this era, so much so that in this HD DVD release one can just make out anachronistic automobiles in the distance in one long shot, and television antennae in another. (The reviewer watched a 65mm Ultra Panavision film earlier in the day, and was expecting to be comparatively disappointed with this HD DVD. I wasn't.) The colors generally are outstanding (original lab work and U.K. prints by Technicolor London), with especially strong greens and blues, all of which lends a travelogue-like quality to the film's Florence scenes lost in its original release, a quality comparable to David Lean's use of Venice in Summertime (1955). The negative sourced shows remarkably little damage, just some very minor speckling during the titles and at the 43-minute mark one shot is a little wobbly, as if the camera negative wasn't quite secured to its gate. The credits, incidentally are slightly window-boxed to avoid damaging their delicate composition.

The disc is an HD DVD 30 in 1080p, with a DTS HD High Resolution 5.1 soundtrack. Originally a standard Dolby Stereo release, this almost exclusively benefits the film's score, which heavily (and helped repopularized) quotes from Puccini. The audio as far as the score is concerned is full-bodied though the dialogue has all been centered and there's very little directionality in the sound effects track save for a few environmental effects. Optional English, French, and Spanish subtitles are included.

Also included is a batch of archival BBC material, all in standard-def 480p. There are short interviews from the period with Callow and Day-Lewis (with a shaved head) on a morning talk show as innocuous as American ones, and a story on the film's popularity in America (the latter segment does not identify the interviewees; presumably these were supered in the studio live). The longest of these pieces is a fascinating tribute to E.M. Forster that aired shortly after his death in 1970. It runs about 25 minutes and features interviews with Richard Marquand and Christopher Isherwood, as well as an archival interview with Forster himself circa 1960.

A regrettably short Film '96 Profile on Merchant-Ivory interviews both men, as well as Carter, Hugh Grant, and Greta Scacci, and offers clips from many of their films up to 1996. Extra features conclude with an unimpressive slideshow photo gallery of images that come nowhere close to matching the clarity of the feature presentation.

While A Room with a View isn't exactly the film to show off your HD player and sound system to friends, the presentation is impressive on its own level, bettering 35mm theatrical prints first shown in America. Made at a time when Dolby mixes and print stock were a lot more basic than they are now, the HD DVD looked much better than I had expected, though the audio was and is stuck in a very mid-'80s mix.

More importantly, the film itself is a minor masterpiece; at a time when the vast majority of available HD DVD titles are high-concept blockbusters of minimal aesthetic interest beyond their effects and production design, the delicate, low-key nature of this title is like a breath of fresh air. Highly Recommended.