BCI Eclipse // Unrated // October 16, 2007
List Price: $39.98 [Buy now and save at Amazon]
Review by Stuart Galbraith IV | posted November 21, 2007 | E-mail the Author
Bounty hunter Josh Randall (Steve McQueen) and his 1892 Winchester "Mare's Leg" are back for Wanted: Dead or Alive - Season Three, the show's last year. Just three years earlier the fledgling young actor bit the bullet by appearing in the infamous low-budget sci-fi thriller The Blob, but by the 1960-61 season McQueen's star was rising fast. He had received good notices for his supporting part in John Sturges' Never So Few (1960), and when that director invited McQueen to co-star in The Magnificent Seven the 29-year-old wanted that part, badly. The famous story is that he feigned an injury by deliberately crashing his car into a tree, and during his "sick leave" from Wanted: Dead or Alive snuck off to Mexico to shoot The Magnificent Seven. However, that film was in production during March-April 1960, about the time Wanted would presumably have been between seasons production-wise. 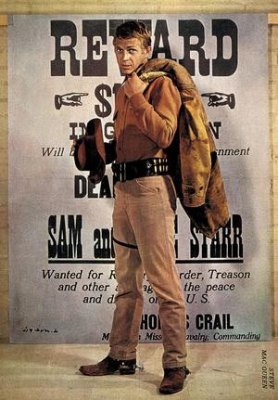 In any case The Magnificent Seven opened that October, about the time the sixth episode of the third season was airing. By then McQueen wanted out; he was sick of the grind of weekly television and with good reason. Quasi-anthology TV Westerns like Wanted: Dead or Alive all but required that their leading characters be as unchanging as the Rock of Gibraltar. Consider Matt Dillon on Gunsmoke: over 20 seasons poor Matt barely even gets to hold Miss Kitty's hand. McQueen had pretty much exhausted the possibilities of his TV character during the show's excellent second year. He's not exactly walking through his scenes during Season Three, but he is coasting. He must have missed the wrap party considering that his next film role, the now forgotten The Honeymoon Machine, his first starring role in a major studio picture, was in theaters by early-July 1961, barely three months after the last episode of Wanted aired.

Another problem is that there seems to have been a gradual lightening of tone to the series; there are too many flyweight episodes. After the okay season opener, "The Trail," in which Josh's latest catch is essentially kidnapped to stand trial in a kangaroo court for alleged Civil War crimes, the next episode is "The Cure" (it's listed on the box as "The Healing Woman," but that was the name of a second-season show) a more typical third season entry. In that show Josh's job is to help alcoholic friend Harry (Harold J. Stone, in a too-broad performance) stay on the wagon until his supposedly teetotaling brother (Thomas Browne Henry) rides into town. In most of these shows Josh is more the amused if put-upon observer to other people's problems.

The one shot in the arm the season gets comes in the form of a new director helming a batch of shows near the end of Wanted's run: 30-year-old Richard Donner (Superman, Lethal Weapon), who began directing episodic television earlier in the 1960-61 season. From the get-go Donner has an obvious affinity for the genre, yet in his six Wanted shows he exhibits a strong desire to break away from the increasingly visual blahness of TV Westerns, a blahness exacerbated on shows like this when they moved more and more out of backlot streets and into obviously phony soundstage Western towns with their harsh lighting and painted backdrop buildings.

On the series' very last show for instance, "Barney's Bounty," Donner took his crew to somewhere in or near Malibu. Unusual for a Western, the show takes place on the Pacific Coast, and Donner takes full advantage of the location, shooting much of it from unusual angles, like a gunfight on the beach shot looking down in long shot from the cliff tops.

Wanted: Dead or Alive - Season Three presents all 26 third season episodes over four single-sided discs, with seven-eight shows on each of the first three discs, and the last four on Disc Four, which includes all of the special features. BCI has licensed the show from New Line and Studio Canal, and as before one must wade through several minutes of studio logos to get to the shows. Episodes are about on par with Season Two; the transfers are a tad soft compared with Paramount/CBS's releases of the same period (Perry Mason, The Untouchables, etc.) but overall look quite nice. They're in their original black and white and run 25-and-a-half minutes, and don't appear to be time-compressed or speed-up from PAL. Shows include the original third season opening, a vast improvement over previous seasons, with Josh's Mare's Leg blazing through a dark doorway. The English Dolby Digital mono is strong; a French audio track is included.

The supplementary features are, to put it mildly, incredibly irritating when not downright amateurish. There are seven featurettes, totaling about 65 minutes. All have been given faux 4:3 widescreen treatments, with the image matted, but also everything is presented with a kind of PIP (picture-in-picture) framing, so that interviews, clips and such from the show are in this tiny frame within the fake letterboxing borders, and up against a "Wanted: Dead or Alive" graphic while a blurred, moving background shambles along behind the clips. It's all patently ridiculous, with action centered on a full-frame image about half the size that it should be. What's more, the same drearily generic Western-style guitar music is heard over-and-over again to the point of madness.

Some of the segments, The Art of the Replica and The Autry National Center for instance, play almost like extended ads, contributing nothing to one's enjoyment or understanding of the show. Other segments offer interminably long clips from various episodes, occasionally interspersed with not very interesting observations from an unseen narrator. One segment, "The Matchmaker," features interviews with Neile Adams, who's misidentified as "Girlfriend of Steve McQueen," even though they were married between 1956-72; and McQueen's manager, Hillard Elkins.

Accompanying the discs are handy episode summaries on the slim cases which also note air dates, director and writers, as well as guest stars. These are helpful, though I found numerous typos throughout.

Fans of Wanted: Dead or Alive will want to complete their series sets, of course. Others curious about the show are better off starting with the second year (given the appalling first season transfers) and if they're still stuck on the show continuing on to the end. It's an above average series; not great, but entertaining. Recommended.