Rykodisc // Unrated // November 13, 2007
List Price: $24.95 [Buy now and save at Amazon]
Review by Stuart Galbraith IV | posted November 23, 2007 | E-mail the Author
The second of three Legends of the Poisonous Seductress films produced by the Japanese studio Toei in the late-1960s, Quick-Draw Okatsu (Yoen dokufuden - Hitokiri Okatsu, 1969) is not the proto-"pinky violence" film that its predecessor was, but rather a very conventional chanbara melodrama. (It's obviously also not a Western, despite the goofy title.) Though star Junko Miyazono and a few other actors from the first film are back, there's no connection between the two films. By program picture standards it's entertaining enough, and the transfer is excellent, as are Synapse/Panik House's extra features. 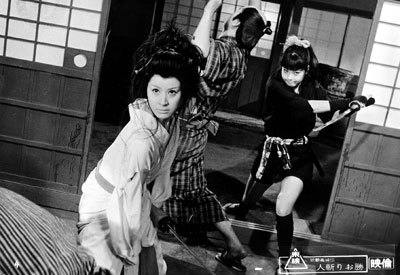 This time Miyazono is Okatsu Makabe, the adopted daughter of a strict, widower dojo master (Ko Nishimura). Okatsu is a fencing expert, much more so that her weak-willed brother Rintaro (Masaomi Kondo), who wants to run off with his pregnant girlfriend Saki (Yukie Kagawa) and forsake his samurai ways to become a simple farmer.

Meanwhile, city Commissioner Shiozaki (Kenji Imai) is robbing local townsfolk blind with their crippling taxes, and the film opens with the massacre of peasants reluctant to cough up. Shiozaki has his sights on Okatsu, but Master Makabe sees Shiozaki for what he is, a corrupt, minor politician with delusions of grandeur. With the help of ambitious assistant dojo master Samonji (Tetsuya Yamaoka), who frames Rintaro for a crime he didn't commit, Shiozaki imprisons Master Makabe and Okatsu, torturing the former to death. Meanwhile Rintaro, on the run with Saki, is likewise betrayed by former retainer Jinkuro (Harumi Sone) and his demon of a wife Okiwa (Toshiko Sawa).

As is the norm for such pictures, the last third is devoted to Okatsu's bloody revenge against Samonji and Shiozaki for her father's murder.

Quick-Draw Okatsu is perfectly average, though average by Japanese studio standards of the 1960s almost always meant that even a film as humdrum as Quick-Draw Okatsu can boast visually dynamic cinematography, taut editing, an evocative score, etc. The first film in the series, Female Demon Ohyaku had been directed by a former assistant to Nobuo Nakagawa (Jigoku); Quick-Draw Okatsu is helmed by Nakagawa himself, though for most of the film his classicism here is pretty indistinguishable from dozens of other directors. One sequence stands out, however: set at a two-storey brothel, in long takes Nakagawa captures the whole building in a single long shot, with the audience watching the action move from room-to-room through open windows. (Like a lot of this plot-hole-filled picture, this doesn't really make sense: the story takes place in winter and snow is frequently seen, so what are all these windows doing open?) Jerry Lewis did the same thing much more elaborately in The Ladies Man eight years before, though it's hard to imagine the 64-year-old Nakagawa looking to Jerry Lewis for inspiration. It's the same basic concept, however, and the most memorable thing about the film.

Though bolstered by the addition of color (the first film is in black and white) and very slightly better production values, one senses that Toei didn't have a lot of faith in Miyazono's star power to carry the film. As an actress she's just fine, but unimpressive in the swordplay scenes; she manages the choreography okay, but she doesn't have the timing or athleticism of, say, Etsuko "Sue" Shihomi, Toei's biggest female action star of the 1970s. Probably for this reason the film awkwardly provides her with Rui (Reiko Oshida, later the star of Delinquent Girl Boss - Worthless to Confess), a mysterious, sexy martial arts master who comes to Okatsu's rescue at the most opportune moments. As in the first film, Miyazono is described as an incredible beauty, but while Miyazono is reasonably attractive, she's not at all exotically gorgeous. An attempt at some typically Japanese studio synergy by giving her a song to sing over a montage (and reprised for the film's coda) similarly fails to impress: Miyazono's voice is noticeably off-key much of the time.

Conversely, character actress Sawa is as she was in the first film deliciously evil: totally without scruples and unhesitatingly wicked. In the course of the film she beats women, sells them into bondage and casually performs unasked-for abortions. An Akemi Negishi type, Sawa's career in films, mostly in roles like this, was limited to a 10-year period from the middle '60s through the middle-'70s (though she did appear in 1997's Time Leap), a shame because she gives the film's best performance by far (though Oshida is eminently likeable). As with the first film, Tomisaburo Wakayama makes a brief but memorable guest appearance, this time playing a sympathetic bounty hunter.

Once again, the region-free transfer (mastered in high-definition) utilized by Synapse/Panik House is outstanding: 16:9 enhanced, the Toeiscope screen shape is retained with the opening titles windowboxed. The image is extremely sharp and the colors accurate. The mono audio is likewise strong, and the optional titles good and unobtrusive. This is as good as standard DVD gets for this type of film.

Filmmaker, Japanese cinema historian and programmer Chris D again provides an expert audio commentary as well as liner notes, some of which repeat the text of the first volume. D knows the genre inside-out, and his commentary is full of the kind of insight one only gets after seeing and studying virtually every example of the genre of its era, which he clearly has.

Also included is a Nobuo Nakagawa poster gallery and biography, a carryover from the label's Snake Woman's Curse, 16:9 and English-subtitled trailers for all three films in the series, and a neat little reversible cover with the original Japanese poster artwork one can display.

As stated earlier, Quick-Draw Okatsu has more than its share of plot holes and ludicrous dialogue (favorite line: "I've seen this kind of sword wound before...") but it's okay, and the presentation is so outstanding that even casual fans of Japanese movies might enjoy this DVD. Recommended.