It isn't difficult to tell why Shane Meadows' This is England won the highest prize at the British Independent Film Awards. Urgent, well-scripted, and with a zesty sense of black humor pic goes a long way in proving that you don't need a big budget to tell a powerful story.

Set in Thatcher's England pic tells the story of 12-year-old Shaun (Thomas Turgoose) who struggles to find his place in a world full of bullies. The lad has lost his father in the Falklands war and is daily being picked on, beat up, and humiliated by fellow classmates. There is no one around to defend little Shaun...but a gang of skinheads who quickly shelter the angry misfit. Soon Shaun is introduced into a world where populism, fists, and poverty rule.

This is England reminded me a lot about Danny Boyle's Trainspotting. Structured as a dark comedy with an alarming message pic is far more real than I expected it to be. Instead of drugs, however, the key word here is racism. And once again, as it was the case with Trainspotting, poverty is credited as the major motivator.

The humor from the opening scenes is quickly countered with gloom and drama past the half hour mark. Once Shaun is accepted in the gang reality sets in and tragic events take place. The youngster finds it impossible to resist the commanding words of his superior friends and eventually sides with the most extreme and vociferous of zealots. As a result the gang is split, friendships are broken, and feelings are hurt. The end comes in quickly.

Films about racism aren't easy to make. They either tend to culminate in tedious moralistic lessons (American History X) or, more often than not, focus on a single theme which fails to adequately explicate why people succumb to it (The Believer). Occasionally, some would trace the agony racists endure while serving the cause (Pariah) and thus offer an intimate look at their world but only a few would manage to tell a story which convincingly explains why racism thrives (Savages). This is England offers a credible account of the social, political, and cultural ingredients racism feeds off before it becomes potent. 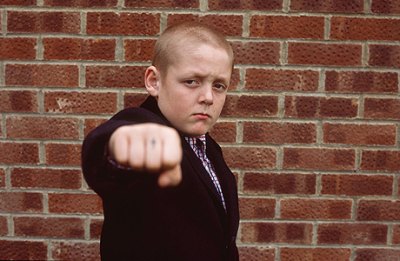 Perhaps because of the fact that the film is very much influenced by Meadows' personal involvement with the skinhead movement the emphasis on detail is exceptional. The costumes, lingo, and soundtrack are addressed with utmost precision allowing the viewer to immerse in a period when Thatcher's government had a solid grip over 10 Downing Street. The opening scenes showing archival footage from the miners' riots and the rise of the Malvinas conflict create an atmosphere which pic sustains in a flawless fashion by resorting to the music of Ludovico Einaudi (Nanni Moretti's April).

Presented in its original aspect ratio of 1.85:1 and enhanced for widescreen TVs the film looks solid. Once again IFC Films/Genius Entertainment have delivered a convincing presentation where contrast is delicately addressed (intentional grain as well as the interesting "dated look" are preserved), colors are convincing, and edge-enhancement is hardly an issue. I did not see any print damage either - scratches and debris are nowhere to be found. The progressive treatment nicely transforms into a solid picture quality which I have every reason to believe replicates the one Meadows intended.

The disc offers an English 5.1 mix with optional English, Spanish, and HOH tracks. The audio quality is excellent as dialog is very easy to follow while the beautiful soundtrack appears to be incredibly well balanced with the actors' speech. There isn't much activity in the rear channels but the overall sound fluidity is quite impressive. Lastly, I could not detect any disturbing audio dropouts/hissing.

There are a number of extras on this disc. In addition to the original theatrical trailer there is a short interview with writer/director Shane Meadows where he recalls his first exposure to the skinhead movement. Next, there is the Making Of where producer Mark Herbert talks about the evolution of this project, some of the technical challenges, as well as the accuracy of the info provided. Shane Meadows also contributes with short comments addressing specific aspects of the story. Next, you will find a full-blown commentary where the director, producer, and lead actor collaborate in a truly revealing discussion. I urge everyone to listen to this track as it addresses much of the director's personal experience during the troubled 80s, the message the story is meant to convey, as well as some quite well done parallels between Britain's past and present. Next, there is a collection of seven deleted scenes which the producers have left on the cutting floor. Most of these are short and hardly relevant to the overall flow story. Finally, you would find two text-only essays by Darrel Buxton: Skinhead Culture-Cropped, Braced and Booted and The Falklands-A Pathetic War which further elaborate on the two main themes the film is built upon. 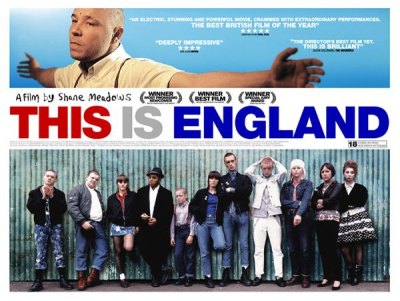 A flawless look at Britain and its not so distant past This is England is Shane Meadow's best film to date. Aside from Ken Loach and Mike Leigh and their raw yet often hilarious takes on poverty and crime there is hardly another film director from recent years who has been so convincing in ridiculing the ugliness of reality. DVDTALK Collector Series.