Lady Constance Chatterley (Hands) lives a monotonous life with older and handicapped Sir Clifford Chatterley (Girardot). She shares his uneventful personal life but intentionally avoids his business matters. Her relaxing trips in the countryside are, ironically, the only excitement keeping the young woman's mind at peace. Until she meets Parkin (Coullo'ch), the local gamekeeper and the two embark on a torrid sexual escapade.

Clocking in at approximately three hours Ferran's adaptation of Lady Chatterley is a softer, gentler, and less vulgar take on the notorious love story. Told with intent to reveal the mechanics of sexual pleasure rather than rush the audience into an explicit salvo of images without addressing the main protagonists and their feelings pic takes its time to prepare the audience for what is to come. Constance's frustration with Sir Clifford is built gradually and her involvement with Parkin arrives naturally.

The casual approach Ferran favors however quickly muddles the literally tone of the film. The build up to the sexual rendezvous is notably protracted and instead of enhancing the sense of realism many critics have praised Lady Chatterley for I felt it unnecessarily distanced the viewer from Constance and her carnal desires. It is rather strange of a feeling indeed as the more time one spends with Constance the less intimate her involvement with Parkin looks.

The unique perspective Ferran brings to this adaptation is nevertheless undeniable. The script allows for long portions of silence where Constance is seen wandering around the country side or left alone with her thoughts enhancing the suggestive element this recent adaptation favors. Unlike previous takes on D.H. Lawrence's story the explicit footage isn't essential, it is subdued, almost too elegant.

The gorgeous cinematography and emphasis on detail are also impressive. The period look pic strives for is well addressed, often exceeding what previous adaptations have achieved. 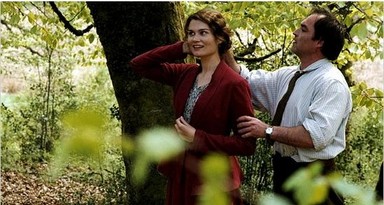 Unfortunately, I was never as emotionally involved with Ferran's adaptation of Lady Chatterley as I desired to be. I did not feel that the transition from sex to love was so convincingly irreversible that the couple was meant to be together. Portions of Constance's frustration were expected and hardly as crucial of a motivator for the affair as the script suggests. If I did not know any better I would have assumed that Parkin was the lucky one, not the one.

Presented in its original aspect ratio of 1.66:1 and enhanced for widescreen TVs KINO's version of Lady Chatterley is what I expected it to be: an improper PAL-NTSC port. The colors are rich but not lush and convincing, contrast is notably inconsistent throughout (with a softer, lacking definition look for pic's great cinematography), and occasional edge-enhancement to further degrade the image quality. On a positive side the print appears to be in healthy condition lacking any disturbing scratches, dirt, and/or debris. To sum it all up this disc offers what KINO are now known for, nothing more, nothing less.

Presented with a French DD track and optional English subtitles the audio treatment is underwhelming. Given the rich soundtrack, with a notable presence throughout the film, it is disappointing that the only track here is a basic 2.0 mix. The dialog is easy to follow and I did not encounter any issues with music to speech balance but nevertheless I feel somewhat cheated that the music score is de facto annulled.

The only extras here are the original US and French trailers and a gallery of stills.

Lady Chatterley scored plenty of lavish reviews overseas in addition to some impressive awards. Yet, I am anything but impressed with this most recent adaptation by Pascale Ferran. The acting is excellent, the cinematography great, the soundtrack fantastic yet the final product left me cold. I felt as if I was rereading an old book with a different, slightly more elegant cover. Rent it.