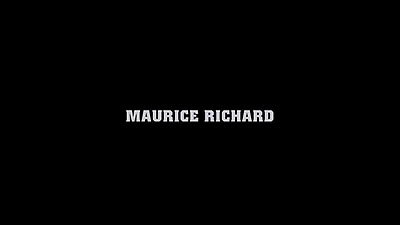 
The Show
If hockey enjoyed the popularity in America afforded to baseball, Maurice Richard would possibly be eligible for sainthood, or at least, be on a handful of stamps. He certainly would be in the same pantheon as your Ruths, Mantles and DiMaggios, as one of the driving forces of the NHL's version of the New York Yankees, the Montreal Canadiens. As the first player to score 50 goals in 50 games, and the scoring leader for several Stanley Cup championship teams, "The Rocket" played with a blend of skill and determination rarely seen in sports.

Though he was extremely successful on the ice, his life was hardly the ideal you'd expect for such a legend, a point the film makes impossible to miss, chronicling his humble beginnings through his humble career. Despite a number of injuries, a lack of size, and a need to work when not playing, Richard's desire to play and desire to win overcame most obstacles in his way, including the unapproving father of his girlfriend Lucille (Lindsay Lohan-a-like Julie La Breton.) But there was one obstacle that was more formidable than any of the opponents he faced on the ice. 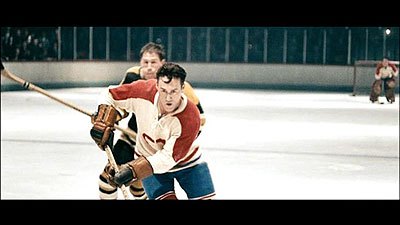 It's hard to believe today, when the captain of the Canadiens, or Habs to the locals, can be piloried for not being fluent in French, that French-Canadiens were treated badly in Montreal, but that certainly was the case for Richard, who spoke halting English, and suffered for it, getting poor treatment from fellow players and league officials. With the fame he achieved as a hockey player, he had a voice with which to argue for change, and the grit to back up his cause when needed. Under attack on the ice for his success, and off the ice for his unwillingness to accept his treatment, he changed everything in the land of the Habs.

Though the film mines Richard's home life for plenty of drama, and the French-English conflict for social significance, what you'll likely remember long after the film ends are the beautifully filmed hockey scenes, directed with a sure hand by Charles Biname. With Roy Dupuis (who looks like the Canadian Bruce Campbell) in the lead skates, you have no problem believing that Richard could not be stopped by conventional means, as his strong jaw and steely eyes are intimidating even on film. Utilizing some stylish camera work, a dramatic color palette and a cast studded with NHL players like Vincent Lacavalier and Mike Ricci, the filmmakers recreated the wartime NHL with excellent detail, coming off as a pitiless mix of Fight Club and Cinderella Man. Using current NHLers worked brilliantly, as the hockey action is realistic, yet the players aren't out of place when acting. (Plus, NHL ass Sean Avery's scene as New York Rangers goon Killer Dill is a wonderful bit of fun for anyone who's ever hated the punk.)

Though a bit long and rambling at points, thanks to subplots of questionable value, like an ongoing quest for Habs tickets by Richard's brother-in-law, the film manages to keep a good balance between game action and drama, though one montage involving The Rocket's barber was a bit too cute for comfort. When the drama and hockey intersect, it's handled as well as any hockey movie this side of Miracle, mixing fine details and big-picture action expertly to tell the story with the game.

Writer's note: In the rating explanation for The Rocket, part of the reason for the PG rating is "some historical smoking." That's got to be one of the most ridiculous ratings element I've ever seen. What does it even mean? 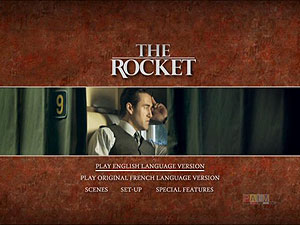 The DVD
The one-disc release arrives in a clear single-width keepcase, with a double-sided cover that repeats the cover art in all its unadulterated glory. The DVD has a stately animated full-frame menu with options to watch the film, select scenes, adjust languages and check out special features. Audio options include English and French Dolby Digital 5.1 tracks, while subtitles are available in English, along with closed captioning. Let me suggest that you watch this film in French with subtitles, as the all-English track negatively affects the impact of the language storyline, since the only real difference between Richard and his teammates is a slight accent. Also, the dubbing on the English track is not even close to what you'll get out of the English subtitles, in terms of quality. Frequently, the English track has the emotional appeal of an old Kung-Fu movie.

The Quality
The anamorphic widescreen transfer on this film looks pretty old, but that's entirely intentional, as the movie attempts a very distinct look, with grainy, somewhat washed out game footage, and very cold, dark scenes away from the rink. On both counts, the film succeeds, but especially on the ice, as the incredible details of the players, including sweat, blood and scars (look for a stitching scene that captures all three brutally), come through crisply, without any dirt, damage or digital artifacts to be seen. As an artistic work, it's a winner, existing in a world of hyper-realism, giving a true story the feel of a fable.

The audio doesn't bowl you over the way the visuals do, as everything maintains a neat order, with the dialogue flowing from the center channel, and music getting a boost from the surrounds, but it all sounds solid, with nothing negative to note. I expected a bit more from the crowd noise though.

The Extras
The biggest extra is the subtitled French-language "A Tribute to Maurice Richard, The Rocket," a 22-plus minute featurette that combines behind-the-scene interviews with the cast and crew, with remembrances of the man himself from a variety of proud Quebecois, including NHLers Lecavalier, Ian Laperriere and Stephane Quintal and, somewhat oddly, Celine Dion's husband Rene Angelil. It's a nice supplement to the film, giving background to the film's concepts and stories from people to whom it means a great deal.

Six minutes of deleted scenes with subtitled French commentary by someone, likely the director, are a nice touch, as the voice focuses on why the scenes didn't make it to the final film. Unfortunately, they aren't available without commentary, so you can't just watch them.

The extras are wrapped up by some trailers, including the U.S. preview for The Rocket. Beware, because it might be the most saccharine trailer ever, barely relating to the film at hand, and coming off like a parody in the vein of the internet-sensation "Shining." 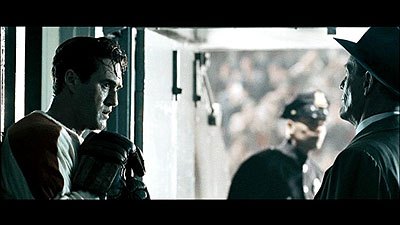 The Bottom Line
You don't need to be a hockey fan to enjoy The Rocket. Being a fan of underdog stories wouldn't hurt though, as Richard battles the odds at every turn, getting by on pure willpower in this gorgeously-filmed tale. The DVD looks and sounds terrific, and the select few features are worth a look. Of course, fans of the coolest game on Earth will probably enjoy it a bit more than others, and the bleu, blanc et rouge faithful will be orgasmic.