Blame It on Fidel

Paris, 1970-71. In the middle of a sizeable political conflict 9-year-old Anna (Nina Kervel) is desperately trying to understand why her parents have changed. Her Spanish father Fernando (Stefano Accorsi) has become a radical communist and her French mother Marie (Julie Depardieu) has decided to support his decision. Mickey Mouse is now a fascist and Catholic School is no longer appropriate. Something has gone terribly wrong, but what?

Seeing the world changing through the eyes of a child whose understanding about revolutionary philosophies, social equality, and other high-powered subjects is, as expected, non-existent could be quite an amusing experience. One that also provides the opportunity to avoid overanalyzing, be less politically-correct, simply calling it as it is.

And in Julie Gavras' award-winning Blame it on Fidel! (2006) Anna is faced with a challenge which the more she attempts to rationalize the more she feels confused with. The answers her parents provide to her questions are neither logical nor acceptable. They are nothing but the words of adults whose minds have been affected by a mysterious bug.

What could be done to get them back to normal?

After a trip to Chile Anna's father announces that wealth must be shared, sacrifices must be made, a new world must be build. At first Anna is puzzled but then she understands precisely what her father means...and turns off the lights in the house. It is time to share.

Hilarious, thought-provoking, and stylishly executed Blame on Fidel! walks the fine line between being a charming comedy and a serious satire with some harsh words for political zealotry. With convincing characters whose positioning within the story allows for multiple viewing angles pic proves to be a major success.

Gavras, the daughter of Greek director Costa-Gavras (Z), reveals a preference for long, continuous, shots whose use throughout the story is very convincing. The camera follows closely Anna's struggle to comprehend the sudden change in her parents's behavior and as a result her face is often the focus of attention. The young actress is impressive in her management of different facial expressions - anger, joy, amusement, etc.

Pic is based on Domitilla Calamai's novel Tutta colpa di Fidel. The adaptation and film editing are both top-notch and as a result pic carries a distinctive literary feel - the actors' lines are well thought of, tempo is consistent, and finale logical. The adult section of the script isn't overly-moralistic or charged with political innuendo even though plenty of political slogans are channeled through a few of the supporting characters. 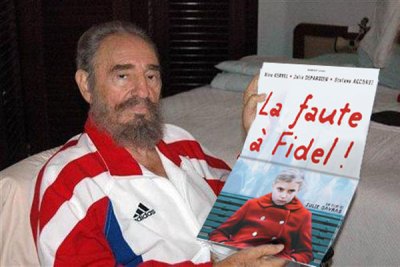 A certain fan of the film

Presented in its original aspect ratio of 2.35:1 and enhanced for widescreen TVs the print provided by Koch Lorber Films appear to be in healthy condition. It is clean, fresh-looking, and without any damage (scratches/debris). Edge-enhancement is occasionally noticeable but not of major concern. Contrast is convincing while the color scheme appears accurate. Especially during daylight scenes the transfer appears notably stable, undoubtedly quite pleasing. Finally, this is a properly converted print where I could not detect any sourcing issues.

Presented with a French DD track the disc presents the film in an adequate fashion, yet I could not help but notice that a more elaborate 5.1 mix would have enhanced the audio department quite a bit. There are some notable music bits that would have sounded lovely. As it is dialog is clear and easy to follow as most of the sound activity is focused in the front speaker. I did not detect any disturbing audio drop outs/hissings. The disc offers optional yellow English subtitles which as far as I am concerned address the French dialog accurately.

Aside from the original theatrical trailer this disc also offers a collage of deleted scenes personally addressed by Julie Gavras. None of those appear particularly important. Next, there is a Making Of which appears to be ported directly from the French disc produced by Gaumont. It is purely technical in nature as it focuses mostly on some "difficult" scenes and the manner in which the cast managed to pull them off (the violent demonstration in particular). Next, there is an intriguing screen-test, quite long in fact, titled "The very, very...Beginning" which recalls the history behind Nina Kervel's attachment to this project. It isn't necessarily an important piece but it is quite charming as it offers some raw acting and hilarious comments from the little girl. In "Piece by Piece" there is more behind the scenes footage where cast and crew are seen interacting. Finally, "Venceremos" is a short piece where as the title suggests a certain revolutionary song is given some extra attention.

An impressively thoughtful film with a variety of successful subthemes Blame it on Fidel! should appeal to a diverse group of viewers. Nina Kervel's performance is a pleasure to behold and more likely than not we shall hear her name again. The R1 disc by Koch Lorber Films is of very good quality and with an abundance of insightful extras. Recommended.