Law of The Weakest (Canadian Release), The

An interesting mix of neo-noir and social drama Lucas Belvaux's The Law of the Weakest is yet to be officially released in the United States. Fortunately, Canadian distribs Mongrel Media offer an adequate English-friendly version which can be easily imported.

A disillusioned forty-something (Robert, Claude Semal), a handicapped old timer (Jean-Pierre, Patrick Descamps), and a struggling young father (Patrick, Eric Caravaca) see no hope in their future. Playing cards, drinking beer, and struggling to make ends meet is the routine they follow daily. Their lives have become so miserable that even the most ridiculous of ideas occasionally sound logical.

When an ex-con (Marc, Lucas Belvaux) arrives in town Robert, Jean-Pierre, and Patrick decide that it is now or never. They befriend Marc and ask for his assistance in stealing a large amount of money from a nearby steel loading depot. 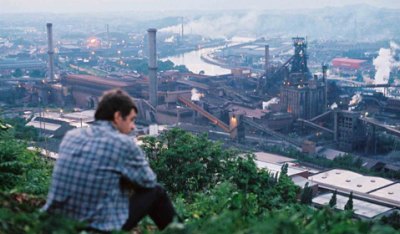 Nominated for Palme d'Or at last year's Cannes Film Festival Belvaux's latest will not disappoint those who found the Belgian director's acclaimed Trilogy (Apres la Vie/Un Couple epatant/Cavale) to be a fascinating view. Well-observed, stylishly executed, and with distinctive social overtones pic goes far in revealing the struggles of the poor and unprivileged.

The actions of the main protagonists are well calculated. They carry hidden messages which are easily deconstructed with crime hanging over their heads (confessions are made, accusations are fired). The depressing look of the city where the misfits reside is constantly an element of importance - the camera spends a great deal of time focusing on empty streets, cheap locales, and the cold morning hours when Patrick's wife (Natacha Regnier) heads to work. The emphasis on ordinary is crucial.

The occasional splashes of black humor do not detract from the overwhelming sense of doom and gloom in this film. Once crime enters the minds of the main protagonists it becomes painfully obvious that a happy-ending isn't on the horizon. Pic does not shy away from pointing precisely what resolution awaits Robert, Jean-Pierre, Patrick, and Marc. It is how and when that drive the story.

Certain aspects from Michael Haneke's minimalistic approach to filmmaking, Ken Loach's fondness for mixing social critique with humor, and Mike Leigh's sense of desperation are certainly noticeable in The Law of the Weakest. Yet, pic has an identity of its own.

Belvaux provides a closure that feels slightly awkward given the variety of sub-themes pic relies on. Contrary to Hollywood films The Law of the Weakest wraps up the action without glorifying or condemning those who have committed a crime. They simply face the consequences of their actions. 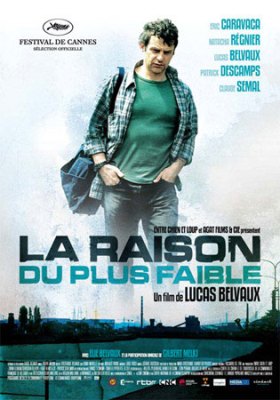 Presented in its original aspect ratio of 2.35:1 and enhanced for widescreen TVs this Canadian disc appears to have been sourced improperly from a PAL source. Hence there is a mild dose of "ghosting" which those of you with progressive sets are likely to immediately notice. This being said however everything else with the video treatment appears to be intact: colors are mostly vibrant and lush, contrast is very good, while print damage is practically non-existent. I have to conclude that had this R1 disc been converted properly this would have been one utterly impressive film to behold. It is a missed opportunity indeed but I must admit one that I could currently tolerate (currently I am not aware of another English friendly disc).

Boasting a French 5.1 and 2.0 tracks the audio here appears to be of notably good quality. The music score is well balanced with the actors' speech and dialog is very easy to follow. I did not detect any sound distortions or audio dropouts. There isn't much activity in the rear channels as this is a dialog driven feature. The optional English subtitles appear are well done (French subtitles are not present).

Unfortunately there aren't any extras on this disc.

An exceptionally strong film with superb performances by the leads Belvaux's The Law of the Weakest is not to be missed. The Belgian director's unique style of filmmaking has matured notably well reconfirming my conviction that he is a name to be followed closely. The Canadian disc herein reviewed does appear to be a PAL-port yet I must recommend it given that a US release is yet to be announced.