Originally released in the US over ten volumes in 2001-2002, Nadia: The Secret of Blue Water, is a popular anime that was created by Gainax, the same studio that was responsible for Neon Genesis Evangelion.  Collected for the first time in one set (there was an earlier release that split the series into two collections) ADV has placed the discs in slimpak cases and released them in a very nice looking tin case that holds all the volumes.  The story of young Nadia and her encounters with Captain Nemo is a lot of fun, and thought the story dips in quality significantly near the end, it's still worth checking out. 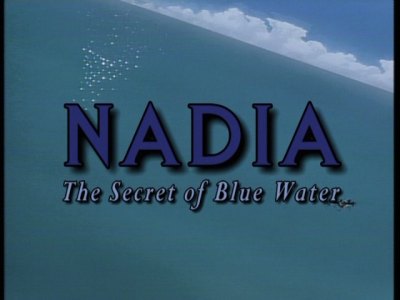 This show has an interesting history that begins years before the first drawing was done.  In the late 70's the Japanese movie studio Toho hired animation great Hayao Miyazaki to come up with some ideas for an animated TV show.  One of the ideas he came up with was entitled "Around the World Under the Sea" a show based on the literary work of Jules Verne.  The project never got off the ground, but Toho liked the concept.

Fast forward to 1989.  Animation studio Gainax is contacted about creating a possible TV series.  Gainax cofounder Hideaki Anno, who coincidently worked with Miyazaki on Nausicaä, goes over some of the ideas that Toho had been kicking around and selects "Around the World Under the Sea" as a project with possibilities.  They come to an agreement and the idea is retooled slightly.  Released in 1990, the show is met with great success.  Some would argue too much, as discussed below. 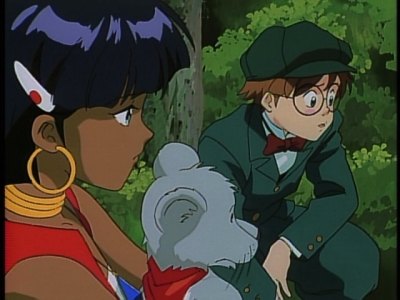 Although the beginning of every episode has a title card touting that this series is bases on Jules Verne's Twenty Thousand Leagues Under the Sea, it is in only the looses fashion.  The show takes place in 1889 and revolves around Nadia, a young girl of mysterious origins.  She doesn't know where she comes from or who her parents are.  At a young age she was sold to a circus and earns her keep as an acrobat.  The only thing she possesses, aside from her pet baby tiger King, is a beautiful blue gemstone, the Blue Water, which seems to have some unusual powers.

While visiting France to enter a plane he's designed in a flying show, 14-year old Jean, an orphan who's also a genius when it comes to inventing things, spots Nadia in the streets and becomes instantly smitten with the attractive girl.  Catching up with her he realizes that he doesn't really know what to say when Nadia is attacked by the Grandis gang, a trio of thieves who are after the Blue Water. 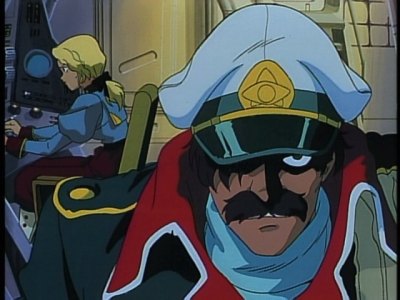 And the chase is on!  Using the flying machine he invented, Jean helps Nadia (and King) escape from Grandis, and then he decides to fly her to Africa, where she's hopeful she'll find her roots.  A mechanical failure lands the group in the ocean where they're rescued by Captain Nemo (who looks exactly like Captain Global from Macross.)  Added into the mix is a villainous group called Gargoyle, who are hoping to use Alantean Technology to destroy Nemo and his ship the Nautilus and then take over the Earth.  Just how is Nadia and her Blue Water connected to both Gargoyle and Nemo?

This is an uneven series.  It starts off really poorly, which usually doesn't bode well for anime, but picks up quickly. Grandis and her two henchmen come across as Team Rocket (of Pokemon fame) wannabes.  For criminals they're incredibly inept and their constant bickering, which is supposed to be comic relief, is more irritating than funny.  In the early part of the series whenever they're on screen the narrative screeches to a halt.  (They do become more palatable later in the series.) 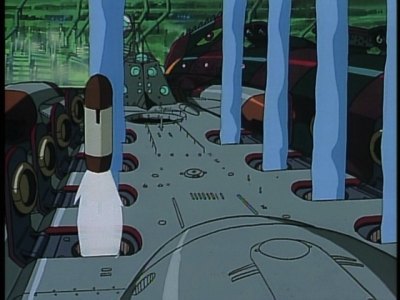 The sections with Nadia and Jean on their own are pretty exciting and even when they're on the Nautilus the story is very interesting.  It's only the frequent subplots that ruin the show.  When the shapely Grandis Granva falls in love with Nemo, for example, the show becomes idiotic.  However since these sections rarely dominate it's easy to overlook them.

With a good, sometimes intriguing story, mysterious events, and likeable characters (well, some of them) isn't not hard to understand why the show became so popular.  This popularity is also the show's biggest downfall.  It was originally plotted and scheduled to last 30 episodes, but when the ratings came in and they were strong, the network asked Gainax to extend the series.  They ended up adding nine more installments (episodes 25-34, the "island episodes") which are simply put, horrible.  The animation was farmed out to another studio and is markedly inferior, the plots during the sequence are idiotic and the show goes downhill really fast.  The original production team came back on board to wrap the series up in the last five episodes, but by that point viewers won't care.  It's hard to care about the show after those filler episodes, and it wasn't all that strong of a program to begin with.  Skipping them would make the series much stronger.

This set contains the entire 39 episodes of the series on 10 DVDs.  (Four episodes per disc with only three episodes on the final volume.)  The discs come in thinpak cases which in turn are housed in a nice tin box.  These seem to be identical to the original discs that were released as single volumes.  While the box is easily dented, it looks nice and doesn't take up nearly the room that the original volumes did.  I'm really disappointed that they didn't include the Nadia movie, something that would have made this set much more appealing.  There are also two audio CDs the ADV included with an earlier release of these shows.  It's a pity that they weren't included in this tin also.

The show comes with the original Japanese audio as well as an English dub, both in stereo.  After watching two episodes in English, I screened the rest of the series in Japanese.  I'm not a subtitle snob, and have really enjoyed some dub tracks on anime, but this one is unbearable.  The phony accents are so horrendous that it's actually funny at times.  The lead character, Jean, has a French accent that sounds like it came out of Monty Python and the Holy Grail.  Suffice to say, it's not worth bothering with the dub track.

The Japanese audio sounds much better, but being an old show it there's not a lot of deep bass and the few explosions don't have the impact they should.  There's limited use made of the front soundstage, but otherwise this is a serviceable track that does the job but not much more than that.

The program is presented in its original full frame aspect ratio and looks fine though not outstanding.  The source material is getting a little old and it shows.  There are occasional spots on the print, and the colors aren't as bright and vibrant as they could be.  The image was a tad on the soft side and there was some noticeable grain in a few places.  Other than that, this is a solid, if average looking transfer.

There isn't much in the way of extras included with this set, as was the case with the original releases.  Scattered across the ten discs are a clean opening and closing, some text interviews with the voice actors, text character profiles, and an assortment of preiviews.

This is an uneven series that hits a few bumps but is generally pretty good.  Unfortunately the nine filler episodes near the end of the show are abysmally bad and really hurt the show.  Anyone who's thinking about this series should just skip episodes 25-34.  The show would play much better than way.  This isn't a bad series, and though it has some problems is mostly enjoyable to watch.  The tin that these come in is attractive and a nice way to store the series.  Overall this gets a light recommendation, since I really don't regret watching it and the show did have its moments.