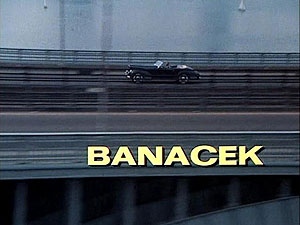 
The Story So Far...
Banacek (George Peppard) is a Boston-based freelance investigator, who solves disappearances for insurance companies in exchange for 10% of what they would have to pay out otherwise, which makes him independently wealthy and a magnet for a bevy of beauties who keep him busy when he's not on the case. A man of taste and refinement, he's aided by his driver Jay (Ralph Manza), and Felix (Murray Matheson), a rare-books dealer who serves as his analog version of Google. The Polish protagonist battled frauds and thieves on NBC in a series of 17 70-minute movies, aired between 1972 and 1974. Arts Alliance released the first season of the show under the TV Guide banner in May of 2007. DVDTalk has a review of the first set: Season One

The Show
In approaching this review, I really began to wonder what I would write about, since you could take any episode in the run and put it anywhere else, without messing things up. That's a strength for a show with a limited run, as you avoid the pitfalls of a serial drama and won't run out of interesting plots. But then, you don't get to know the characters all that well, and the depth of the stories suffers.

The second season of "Banacek" tries to build out the investigator's world with the addition of Carli Kirkland (Christine Belford) an insurance company-investigator trying to solve each case before Banacek does, saving the company from paying his fee. A very proper, attractive woman, she's not keen on Banacek's womanizing, but there's an undeniable mutual attraction at work as well. The fact that she can use her sexuality to her advantage certainly impresses Banacek, but she can't compare to him in the skills department. 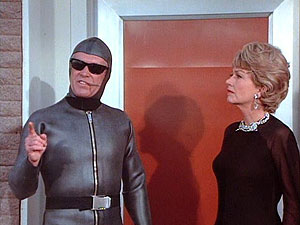 Not that he needs the help, as he capable proves in each of the eight cases he takes on in this set. Whether it's the disappearance of the world's smallest rocket engine or a three-ton statue. Each episode starts with a lengthy set-up that establishes the value of the insured items, including a Grecian bowl, a room-sized supercomputer and a race horse, and then makes them disappear, kicking off the investigation. If you pay enough attention, you get enough clues to somewhat figure out what happened, but the "who" should remain a mystery until Banacek explains everything to a roomful of suspects, like all good TV detectives should.

The addition of Carli was a welcome touch, as she adds a sense of competition and a healthy dose of sexual tension that doesn't put the show in any risk if/when they get together, as their rivalry isn't connected to how they feel about each other. the rest of Banacek's crew remains mostly static, though Felix' exploits with any number of pretty young things, under the guise of academic pursuits, are increasingly amusing this season. Jay, on the other hand, becomes increasingly grating, as he mugs more and more, coming off as practically vaudevillian at times.

The only negatives that exist are the same ones found in the previous season, namely the laughable fight scenes, the occasional bad acting and the sometimes plodding pace (in one episode, we actually watch as Jay removes a set of screws, one. At. A. Time.) But none of that can detract from the experience of watching Banacek work a case and work his charm on the ladies. 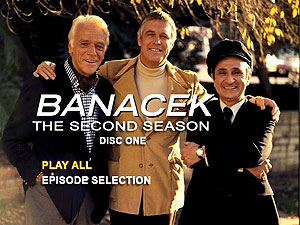 The DVDs
This time, the eight episodes are spread over three DVDs, instead of two, with three on the first two discs and two on the third. Not sure what the packaging is like on this set, since we only received screener discs, but it's worth noting that the TV Guide logo is absent from the discs, unlike last time out. The menus are static full-frame, with options to play all the episodes on a disc or select individual shows. There are no audio options or subtitles, though there is closed captioning.

The Quality
As with the first set, the full-frame transfers here look very good, but have a handful of defects, including dirt and damage throughout the set. The colors are probably the high point ofthis group of episodes, as they feature a rich, vivid palette, to go along with a decent level of detail and a lack of digital artifacts.

The Dolby Digital 2.0 soundtracks deliver the original mono sound from the show, which is straightforward and strong. A TV show from the early '70s isn't likely to blow anyone away aurally, but the sweet period score and well-recorded dialogue come across cleanly. The sound effects are another story, but that seems to be an issue with the way it was recorded.

The Extras
The only extra included in this set is the show's pilot episode, which is an excellent addition to the set. It's impressive to see how fully realized the Banacek concept was from the start, as the pilot is as good as any in the show's run, with all the important elements of the concept in place. The episode, which centers around a vanished armored car, shows the origins of Banacek's relationships with both Jay and Carli, making it a big part of the show's history. Despite the presence of Carli in the pilot, maintaining her same dynamic with Banacek, she didn't appear in the series until the second season, so the pilot doesn't quite fit the continuity of the series, but that's hardly a major problem. 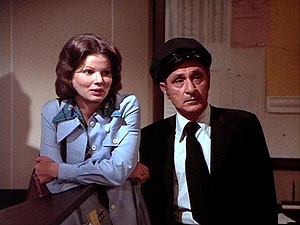 The Bottom Line
There's nothing on TV today like "Banacek, which is a real shame, considering how entertaining the series is. Sure, it's eminently sexist, frequently silly and utterly dated, but man, Banacek is simply the coolest detective ever to grace the small screen. This set completes the show's too-short run, with DVDs that look and sound solid, and the pilot that should have been on the first collection. Fans of the show will absolutely want to complete the collection, especially with the pilot now included, while anyone new to the Polish prince can jump right in and enjoy his adventures, something I suggest anyone who enjoys a mystery try.