Seven years after their last collaboration together, "Les Ames Fortes", Chilean director Raul Ruiz and John Malkovich reunite in a tempting but ultimately underwhelming biopic about Austrian painter Gustav Klimt. Presented in its shorter 96 minute version pic is more than likely to remain niche despite of a stellar cast and potent subject matter.

For much of the ninety minutes I spent with Ruiz's Klimt I could not help but think how incredibly beautiful everything in it looks -- excellent decors, plenty of naked bodies, plenty of color. Yet, I could not force myself to like what was a poor attempt at recreating the life of a man with a controversial legacy.

Written in French (Ruiz), adapted in German, and translated into English Klimt is a colorful mosaic of colorless lines with little meaning, if at all. It is fabulous to behold but empty and pretentious likely to annoy even the most strident of the Chilean director's fans.

Told in reversed fashion, with Klimt on his dying bed recalling the peaks of his life, pic stammers between being a truthful examination of the artist and his work and an entertaining fairytale with more style than substance. Occasionally freshened up by Malkovich's commitment to enhance the role of symbolism in Klimt's works and its transition from art to reality pic nevertheless remains chaotic, almost impossible to decipher.

If such was the effect Ruiz desired, to spur an emotion or feeling, impossible to rationalize with a logical read of the story, then by all means Klimt does not disappoint. The artistic spirit of Viennese culture is as prevalent in this film as one might have hoped...as it is confusing and misleading, quite similar to the Austrian painter's works --admiration, or enjoyment if you will, is possible to attain but not necessarily guaranteed.

The Art Nouveau opulence is countered with striking images of provocatively (un)dressed women who as the story progresses evoke an almost surreal feel. In sync with the temporary emotional blackouts Klimt suffers pic effectively, or disappointingly, depending on your tolerance for the director's warped artistic vision, mixes facts with fiction.

With editing being far less impressive than one would have hoped, not withstanding the fact that a longer version of this film is in existence, Klimt feels too self-absorbed of a production. And though Ruiz fittingly labeled it "phantasmagoria" the nuanced sophistication of Klimt's paintings is simply nowhere to be found here. It all feels empty, conceited, and misleading. 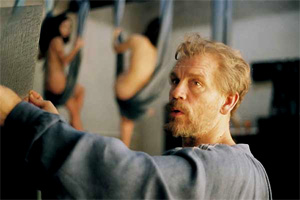 Presented in an aspect ratio of 1.78:1 and enhanced for widescreen TVs the print provided by Koch Lorber Films is in healthy condition. Colors are convincing, contrast is largely satisfactory, and damage is a non-issues. Edge-enhancement isn't something to worry about even though I was able to spot its presence a few times. In the grand scheme of things this isn't a stunningly looking, lush, print yet it is every bit as I expected it to be: getting all the basics right.

Presented with an English 5.1 track the audio is definitely on par with the video presentation. It is solid, without any substantial issues of concern to report, and perfectly complimenting the rest of the presentation. Disturbing drop-outs or hissings were not detected. Close-captions are optional.

Aside from the original theatrical trailer the only other extra material you will find here is a "making of" featurette which if anything is extremely honest about the film, its history, and its potential audience. The producers and cast lament that an international effort such as Klimt would never be possible to make in North America given the existing filming conditions. They are also quite honest that this is an art-house production which is likely to appeal to a selected audience well aware of the subject matter.

I would like to sum up my feelings of this film with a quote by Gustav Klimt himself which accurately reflects my thoughts on Raul Ruiz and his latest film:

Whoever wants to know something about me (Klimt) - as an artist which alone is significant - they should look attentively at my pictures and there seek to recognise what I am and what I want.