A family of felines walks into a talent agency. The Tom Cat says to the agent, "Boy, do I have an act for you!" 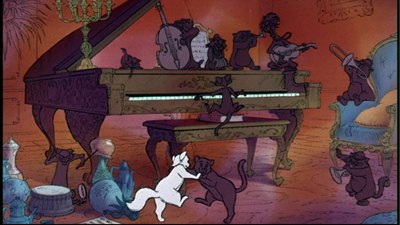 Disney's 1970 animated feature, The Aristocats, was their 20th. It has the distinction of being the last full-length cartoon greenlit by Walt, and the first completed after his death. Though there is a sense of deja vu in the way the film picks and chooses from previous Disney features ("Picture this: it's Lady and the Tramp meets 101 Dalmatians...but with cats!"), the new The Aristocats: Special Edition reminds us that though the movie plays with familiar toys, it's still one of the liveliest and most fun from the studio's vaults.

The Duchess (voiced by Eva Gabor) is the pampered pet of an aging French actress (Hermione Baddeley), perhaps the most sophisticated crazy cat lady that's ever been. It's the Madame's intention to leave her vast fortune to Duchess and her three kittens (Marie Antoinette, Toulouse, and Berlioz) upon her death, and provided that her butler Edgar (Roddy Maude-Roxbury) stays on to take care of them, he will receive the estate once the foursome have exhausted all thirty-six of their respective nine lives. Not content to wait, Edgar drugs the poor kitties and drives them out to the countryside. He would have drowned the family had he not been attacked by two French farm dogs with curious Southern drawls. No surprise, Napoleon and Lafayette were voiced by American character actors Pat Buttram and George Lindsey, better known as Mr. Haney from "Green Acres" and Goober from "The Andy Griffith Show." These are just two of the excellent casting choices that makes The Aristocats such a hoot and a holler (to quote a later Disney tune).

Stranded in the middle of nowhere, Duchess attracts the attentions of one Abraham De Lacey Giuseppe Casey Thomas O'Malley, but you can call him O'Malley for the sake of brevity. He is the kind of carefree Disney bachelor with commitment issues that was my favorite childhood archetype. (Which probably goes to explain why I am such a wreck today. This film also taught me, in the words of Toulouse, that "Females never fight fair." Can I sue Disney for emotional suffering?) Voiced by the expert on the "bear necessities," Phil Harris, O'Malley goes where his feet take him, living it up on a side of Paris that Duchess has never seen from her pampered seat on the posh end of town. Helping the family find their way home, O'Malley introduces them to his jazzy pals, leading to one of the more memorable sequences in the movie.

It's funny, because I actually went back to The Aristocats hinking that it was probably slightly hip for a Disney feature, what with its jazz-inflected score and Scatman Crothers as the bandleader. I figured it was probably from the early or mid-'60s, so kind of late to be jumping on the bebop bandwagon, but just in time to avoid the issue of rock 'n' roll. So, I was a little shocked to see it was a 1970 production and discover jazz truly came to Disney long after it had ceased being a scandalous fad. (Okay, yeah, ignoring Louis Prima throwing down in The Jungle Book, but you know what I mean.) While the multicultural collection of cat musicians may cause some cringes today for the kooky Siamese (as played by Tigger himself, Paul Winchell), credit where it's due, the "Ev'rybody Wants to Be a Cat" number is still pretty awesome. The animation is fun, and the choreography is amazing. Plus, anyone who has owned a Siamese knows they are strange creatures, after all.

Watching The Aristocats now, the choreography is actually the thing that impressed me most; especially, the body language of the cats. The communication between Duchess and O'Malley includes the obvious body brushes back and forth, but also nonchalant paw cleanings, rolling on their backs, and even hair in their ears (granted, not a communication detail, but a good detail nonetheless). My own cat spent the running time of the film in her usual begging lead-up to her regular feeding time, and I saw much of the same behavior. Fair warning, though, she didn't really care for my attempts to force her to jitterbug during "Ev'rybody." Undertake similar efforts knowing that the scratches you will incur will be taken at your own risk. 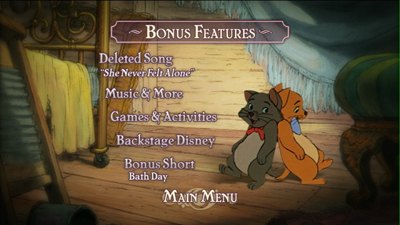 Video:
This is the second time The Aristocats has been on DVD. It was released in 2000 as part of Disney's Gold Collection (reviewed here), one of the company's many arbitrary distinctions for its multiple releases. As they do with all of their movies, they keep this one on a regular cycle of re-releases, so that 2000 disc went out of print sometime after its release, and this new 2008 DVD is the first time The Aristocats has been available for many years. I'm happy to say in this case the Special Edition is far more special than the Gold version, and the presentation has been vastly improved.

The 2000 DVD had a full frame transfer at 1.33:1, and the new The Aristocats: Special Edition upgrades the movie to its intended theatrical aspect ratio, giving us a lovely 1.75:1 anamorphic transfer. Good colors and a clean image make this a must-buy for animation fans. I know I was lucky enough to see The Aristocats in the theatre at least once, but have become conditioned to the square TV version over the years. This new widescreen disc is a gorgeous revelation--though I am sure that the preferred image will be up to debate. As you will see in these captures, there is more information on the top and bottom in the fullscreen version, yet the framing is more cinematic and less cramped in widescreen. 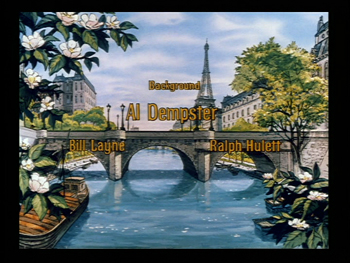 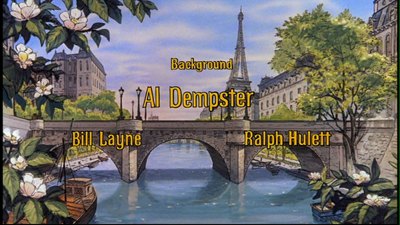 You can definitely see how the picture was pinched in to accommodate the credits here in the first image. I also think the colors in both examples are better on the 2008 samples. 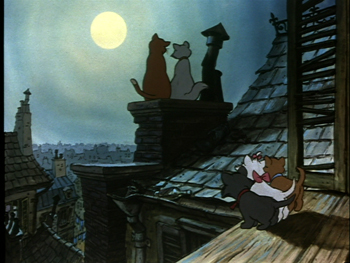 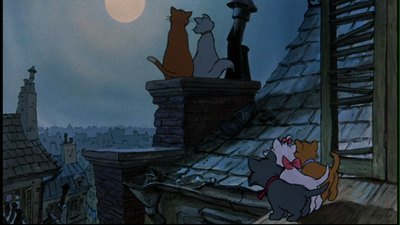 I think that the discrepancy in images is that some of the later Disney features were prepared with both theatrical and TV viewings in mind; so, again, the overall image quality here is better, more vibrant, more clear, but some may not like the change because they may think they are losing something.

Playback of the disc can be done as normal, but when it loads up, it will go into Disney's "FastPlay" function. This is an annoying feature that is marketed as being for parents, i.e. just pop the disc in and go, bypassing all menus. What this does is it plays a series of trailers (read: commercials) before launching into the main movie, and then plays the bonus features once the end credits are done, not surprisingly starting with the "sneak peeks." This is to make sure your kids see as many ads for Disney films as possible. To bypass this, you need only hit your menu button.

Sound:
The audio has also been improved, with the previous 2.0 stereo mix replaced by a new 5.1 soundtrack. It sounds fantastic, with solid front and back and really good levels on the music.

There are also French and Spanish dubs in 5.1, and Closed Captioning for English-language viewers.

A second subtitle track can be accessed with your remote or found in your bonus features menu. This adds titles to the songs only, creating a sort of sing-a-long version of the musical numbers. While you can integrate this into the film, you also have the option of watching the songs on their own.

Extras:
The only bonus features available in 2000 were interactive elements for children: a read-along story and a trivia game. There was also the theatrical trailer and a booklet with some information about the music. These are all gone, with the interactive elements being replaced by new games. First, Virtual Kitten is a way for kids to learn how to take care of cats. This can be played on your DVD player or on your computer, with extra features being available if you play it on your computer's DVD-ROM drive. A second game, Fun With Language, encourages children to learn the names of the instruments played by Scatcat's band.

The more adult features on the disc are of the usual exceptional Disney quality. First is a deleted song, "She Never Felt Alone," (7 minutes, 54 seconds) introduced by Richard Sherman. He plays the original audio demos for the two times the song was to appear in the film, first sung by Madame and then by Duchess, illustrating them with production drawings, storyboards, and cast photos.

"Backstage Disney" has three features tied more to the making of the movie. One is an extensive gallery featuring production art; character development (including a maid that never made it to the film); cast and crew photos, as well as live-action reference; poster art and promotional items; and 1970 photos from the Los Angeles premiere and the Disney theme park characters.

"The Sherman Brothers: The Aristocats of Disney Songs" (4:33) has the two composers discussing their approach to the songs for the movie, complemented with clips from the final product. "The Great Cat Family" (12:50)" is an excerpt from a 1956 episode of "Wonderful World of Disney," and thus has nothing to do with The Aristocats at all. Instead, it has Walt Disney narrating the history of cats over some special color animation.

It's too bad there isn't a longer making-of documentary here like we've gotten on other Disney re-releases in the last couple of years. It's the only black mark on an otherwise fine package.

A bonus vintage short, "Bath Day" (6:38), stars Figaro the cat and pits him against some street toughs after Minnie gives him a washing. This extra is not listed anywhere on the packaging--not even in the insert inside the case, which has chapter listings and a guide to the bonus features. Nor is the music/lyrics-only option advertised.

The DVD comes in a standard plastic DVD case with an outer cardboard slipcase.

FINAL THOUGHTS:
The Aristocats: Special Edition is the latest Disney re-release to best its original, out-of-print DVD. Complete with a new widescreen transfer, 5.1 audio, and a handful of bonus features, it is Highly Recommended. The Aristocats is a fun selection from the tail end of the original classic period of Disney studio animation. Following a collection of felines across a jazz-inflected Paris, it's full of colorful characters, great songs, and beautiful animation--all the ingredients for the best Disney pictures. This one is worth buying again if you already own the 2000 DVD, and it should sit comfortably in any collector's animation section. 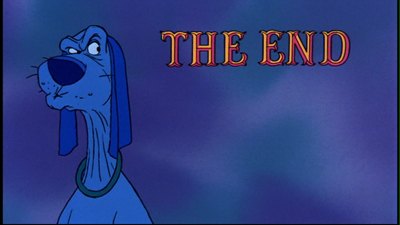