Mongrel Media // Unrated // January 8, 2008
List Price: $24.95 [Buy now and save at Amazon]
Review by Svet Atanasov | posted January 29, 2008 | E-mail the Author
The Film:
Screened at the Berlin International Festival in 2006 Egyptian director Marwan Hamed's "Yacoubian Building" offers a bold and surprisingly mature look at a country torn between Western modernity and North-African traditionalism. Based on Alaa Al Aswani's novel, an Arabic sensation, pic galvanizes homosexuality, religious fundamentalism, and romance in an explosive mix bound to fascinate those who are lucky enough to see it.

Multiple characters occupy the colorful Yacoubian Building -- rich, pretentious, secretive, ambitious, insincere, and dangerous. Some trapped in the past, some struggling with the present, a few dreaming about the future.

Aging Zaki Pasha (Adel Imam) is a respected but frivolous man whose passion for women is criticized by his old-fashioned sister (Issad Younis). Forced to leave their inherited property Zaki moves into his "office", a place where women share his love.

Christine (Youssra), a lounge singer and Zaki's former lover, is concerned. She sees that Zaki is emotionally devastated and offers her support. Yet, instead of ending his rendezvous Christine's ex-lover falls hard for the naive and visibly younger Bosnaina (Hind Sabry).

Bosnaina's lover Taha (Mohamed Imam), a poor man whose ambitions to become a police officer are crushed because of his social status (!), finds solace in religious extremism.

Hatem Rasheed (Khaled El Sawy), an editor in a respect French tabloid and resident of the Yacoubian, is a lonely gay man looking for a partner. He finds one in a straight and unsuspecting soldier from the countryside dreaming about moving his family to Cairo.

Haj Azzam (Nour El Sherif), a prosperous businessman and a friend of Zaki, is after a political career. When he finally sees his wish come true Haj is faced with a terrible realization. 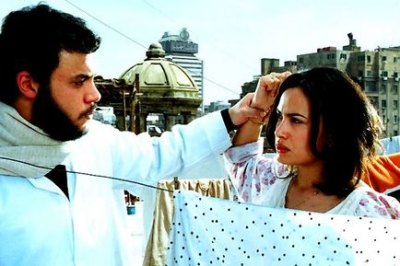 Colorful, convincing, and audacious Yacoubian Building is the creation of a man with a powerful vision. Stylistically impeccable pic also makes for a great laugh -- quite unexpectedly given the variety of controversial themes.

Politics and religion in particular take a central role. Past, present, and future are embedded into the story with specific references to Egypt's socio-economic ordinance. A controversial scene in front of the Yacoubian where Zaki addresses the country's fate delivers a sense of urgency. His words are bitter and angry, reflecting the concerns of many ordinary Egyptians.

The cast performances are incredible. Everyone, including the secondary characters, is remarkably convincing granting pic an epic feel.

In 2006 Yacoubian Building was selected to represent Egypt at the Oscars.

Presented in its original aspect ratio of 1.85:1 and enhanced for widescreen TVs the print provided by Mongrel Media appears in healthy condition. Colors are natural and mostly convincing, contrast is passable, and substantial print damage isn't present. The major issue, yet again, is the conversion - a PAL to NTSC port which automatically provides the print with plenty of "ghosting". To make matters even worse the "ghosting" is exceptionally strong to a point where it often becomes a major distraction particularly during the open scenes of Cairo with camera zooming quickly. It is quite sad to see yet again that what could have been a tremendously strong presentation is nothing but an average presentation with some notable issues.

The film arrives with an Arabic DD 2.0 track and a French DD 5.1 dub. This is rather strange as the Arabic soundtrack is quite strong and the French dub rather basic. There is hardly any emotion in the voiceovers if at all. This being said, I did not detect any disturbing hissing(s) or pop-up(s) with the Arabic track. Optional English and French subtitles, white in the proper mid-size font, are provided for the main feature.

Aside from the original theatrical trailer there is "Making Of" which appears to have been ported directly from the French release by BAC Films. While there are some very interesting and insightful comments by the cast and crew the extra appears to be subbed in French only.

An exceptionally strong film with top-notch performances by the leads Yacoubian Building comes highly recommended. Unfortunately, I can not recommend the disc. It is improperly mastered, with some obvious faults, and more than likely capable of upsetting those of you with progressive TV sets. Rent It.